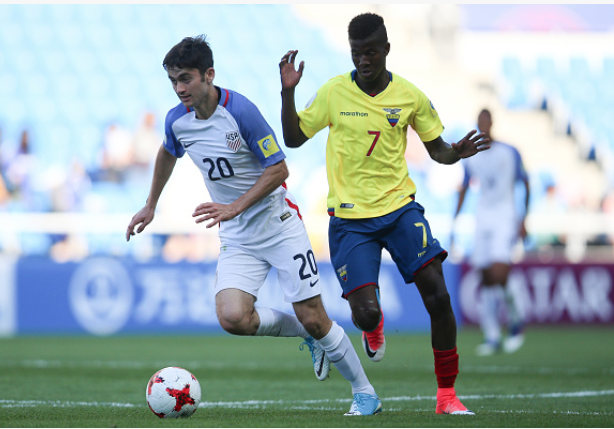 With just seconds remaining and his side in need of a goal, Luca de la Torre fired the U.S. Under-20 Men’s National Team to a must-needed point to start the Under-20 World Cup.

The U.S. midfielder provided the equalizing goal in stoppage time, leading the U.S. to a come-from-behind 3-3 draw with Ecuador in their group stage opener. The last-gasp equalizer saw the U.S. grab a point from arguably its toughest group-stage opponent while earning de la Torre honors as SBI U.S. U-20 Man of the Match.

De la Torre’s day ended in front of goal, but it began with something a bit a playmaking. After surrendering two quick goals to start the match, the U.S. was in need of a spark, and de la Torre and forward Josh Sargent provided it. After driving at the defense, de la Torre played Sargent through, leaving the young forward with just the goalkeeper to beat as the U.S. pulled a goal back.

Sargent did the work to tie the game up again but, after surrendering another goal to Ecuador, the U.S. needed one more to steal a point. De la Torre provided, pouncing on a loose ball in the box and firing into the corner, beating an Ecuador defender on the line and earning a massive draw for Tab Ramos’ side.

De la Torre’s winner earned him Man of the Match recognition, narrowly beating out Sargent for the opening honors.

Who was your U.S. U-20 Man of the Match? Which player stood out to you?