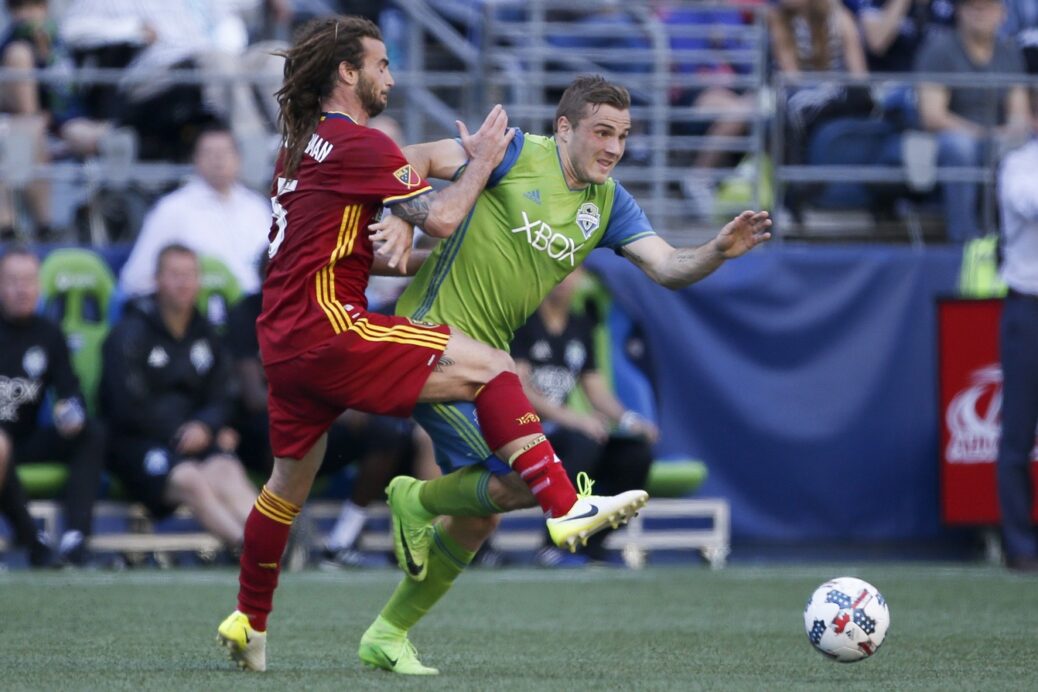 SEATTLE–  It was a discombobulated, unlikely thing, the goal that snapped a three-game losing streak on Saturday afternoon as the Seattle Sounders defeated Real Salt Lake 1-0 in front of 40,588 at CenturyLink Field.

After the Sounders dominated the first half, Harry Shipp delivered the game’s lone goal in the 42nd minute on a play that saw no fewer than three deflections. Nicolas Lodeiro sent in an initial corner kick to Gustav Svensson, and ensuing crosses from Svensson and then Lodeiro both deflected off defenders before Svensson found Shipp in the heart of the penalty area. Shipp promptly one-touched a shot that sent RSL goalkeeper Nick Rimando diving to his left, but the ball deflected off a defender yet again, ricocheting into the left-side netting for the 1-0 lead.

It was Shipp’s second goal of the year, and just the second time this season the Sounders went into halftime holding a lead.

Real Salt Lake finally came out of its shell near the hour-mark after head coach Mike Petke inserted Jefferson Savarino into the match and opened up the game. But playing on short rest and without many healthy bodies, the visitors never mounted serious pressure. Joao Plata provided RSL with its best chance of the day in the 73rd minute, driving a left-footed shot that forced goalkeeper Stefan Frei to dive to his left to preserve the 1-0 lead.

With the win, the Sounders (3-5-4, 13 points) snapped a three-game losing streak that saw them fall by a combined score of 8-1. While they were still frequently let down by the final pass or shot on Saturday, it was not an afternoon to worry about aesthetics.

It always looked to be an uphill battle for Real Salt Lake (3-8-2, 11 points), shorthanded on the road against a defending champion desperate for a result. Petke started two rookies at fullback (Reagan Dunk and Justin Schmidt), while players like Jordan Allen, Tony Beltran, and Demar Phillips sat with injury. Promising young center back Justen Glad is nursing a knee injury with the U.S. U-20 Men’s National Team. All this for an organization that had only recorded two wins in 11 regular-season trips to Seattle since the Sounders joined the league in 2009.

The second half started much as the first ended, and in the 53rd minute referee Kevin Stott awarded the Sounders a penalty kick after Chris Schuler brought down Morris as the second-year forward streaked into the penalty area. Rimando denied Clint Dempsey on the penalty kick, however, diving to his left to stop a shot that never neared the post.

Seattle had countless opportunities to take the lead earlier in the first half, controlling 74.8 percent of possession while outshooting the visitors 14-1.

In just the third minute Rimando delivered a quality save to deny Lodeiro. Less than 10 minutes later Rimando just managed to slap away a flicked-on header from Morris off a Lodeiro cross. In the 19th minute, clever combination play between Shipp and Morris left Shipp with an open look that sailed past the left post. Just before the half-hour mark Shipp ripped a half-volley over the crossbar. Moments later Joevin Jones skipped a cross through the 6-yard box that narrowly missed a sliding Clint Dempsey. In the 35th minute, Svensson rose to powerfully head a Lodeiro corner kick, but again Rimando delivered the save. Two minutes later Morris found Lodeiro charging into space in the heart of the area, but the Uruguayan designated player made a mess of the chance, scuffing a shot wide right.

Looking forward, both teams are back in action next weekend. The Sounders host the Portland Timbers, while Real Salt Lake hosts the Philadelphia Union.

Harry Shipp delivered the game-winning goal and was dangerous throughout the first-half. Better finishing and the young midfielder might have earned himself a hat trick.

Rimando’s denial of Dempsey from the spot. While RSL never seemed to have the firepower or energy to rally, yet another Nick Rimando penalty-kick save gave the visitors a chance to escape with a road point.

RSL’s fullbacks consistently left space behind them, inviting Jordan Morris and the rest of the Sounders’ attack to dominate the first half.