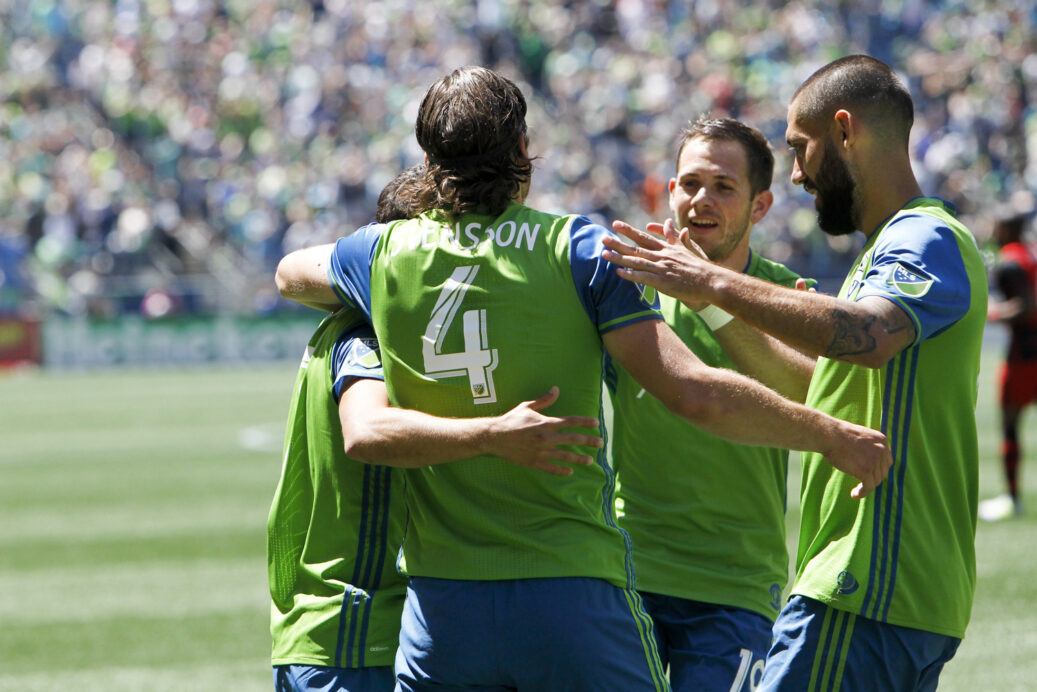 SEATTLE– The Portland Timbers and Seattle Sounders — archrivals in sundry leagues for parts of five decades — met for the 96th time on Saturday afternoon. The defending champion Sounders struck early and held on with a certain steely desperation against an opponent heavy on possession but light on creativity, delivering a fraught 1-0 win in front of 47,362 at CenturyLink Field.

Cristian Roldan opened the scoring in just the fourth minute, posting up Zarek Valentin at the doorstep and heading home a corner kick originally redirected by Chad Marshall. Nicolas Lodeiro earned the corner with a rifled shot from distance that forced Timbers goalkeeper Jack Gleeson into an acrobatic save. It was Roldan’s first goal of the season.

The Sounders may have gotten away with a handball early in the second half, as a Darlington Nagbe shot appeared to deflect off Marshall’s raised forearm. Referee Mark Geiger did not blow his whistle, however. The Timbers also thought Osvaldo Alonso should have been whistled for a handball later in the half.

The Sounders (4-5-4, 16 points) have now won two straight matches — shutting out both opponents — after a three-game losing streak saw them outscored 8-1. After racing out to a 3-0 start to the season, the Timbers (5-5-3, 18 points) are now winless in their last five games (0-3-2). They are also winless in nine regular-season trips to CenturyLink Field since joining MLS in 2011.

Although missing key midfielder Diego Chara to suspension, the Timbers responded brightly to the early deficit. The visitors repeatedly worked down the left flank and took advantage of space between the back line and central midfield to dominate the next 25 minutes.

In the 19th minute, a Sounders turnover led to a dangerous Timbers counterattack, but three separate Sounders blocked a burst of Timbers shots: Gustav Svensson and Marshall took turns denying Fenendo Adi in the area before Alonso slid to deny David Guzman inside the arc.

The Sounders finally settled down near the half-hour mark, as a formational tweak shifted Harry Shipp to provide cover for right back Brad Evans and Lodeiro moved more centrally in attack. The best movement of the first half came in the 28th minute, as Shipp combined with Clint Dempsey and Jordan Morris before sending a shot from the top of the area over the crossbar.

The visitors outshot the Sounders 15-5 in the first half and controlled 56 percent of the ball in the process, but never seriously challenged Sounders goalkeeper Stefan Frei. Liam Ridgewell missed a golden chance to equalize in the 44th minute, sailing a harmless header out of bounds after finding himself unmarked at the back post on a redirected corner kick.

Marshall had two chances to double the lead in the first 15 minutes of the second half, first sending a header and then an open volley over the crossbar. Clear chances were few and far between down the stretch, as neither team capitalized on a handful of half chances.

Looking forward, the Timbers host the San Jose Earthquakes on Friday, while the Sounders visit the Columbus Crew on Wednesday.

Cristian Roldan scored his first goal of the season while being bear-hugged by Zarek Valentin. He did have a couple of  turnovers and — along with Osvaldo Alonso — left an uncharacteristic amount of space in front of the defense for stretches during the first half. But he delivered key interceptions, was resolute in the second half, maintained a ridiculous work rate, covered for Joevin Jones when the left back surged forward, and battled multiple injuries to stay on the field.

The non-call on Chad Marshall in the second half. Different day, different referee, different call.

Portland’s attack. So much possession, so little punch.