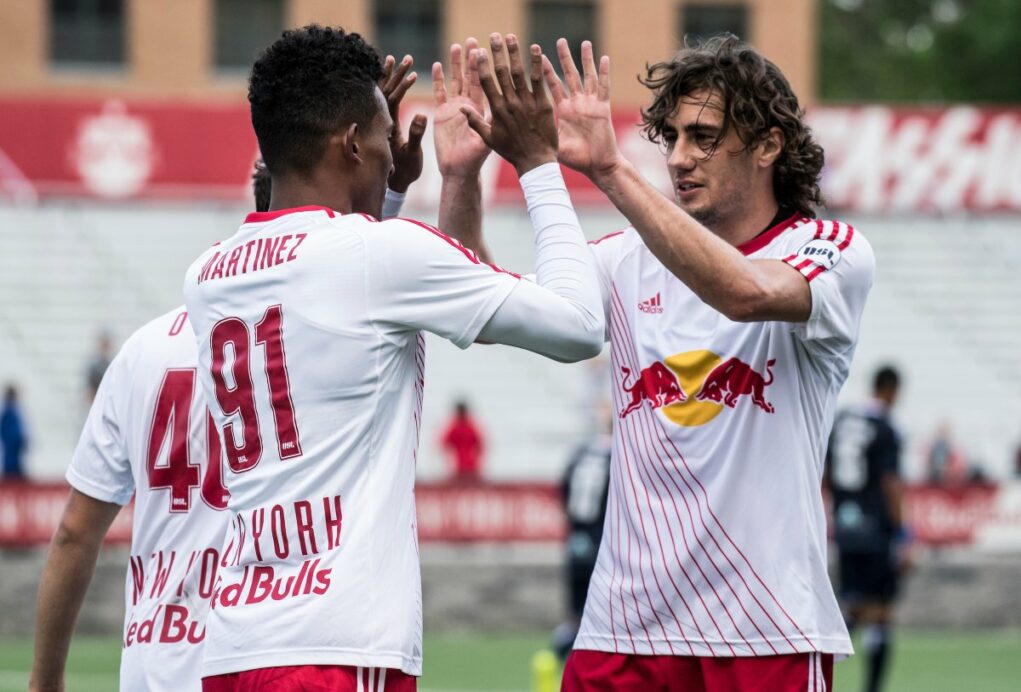 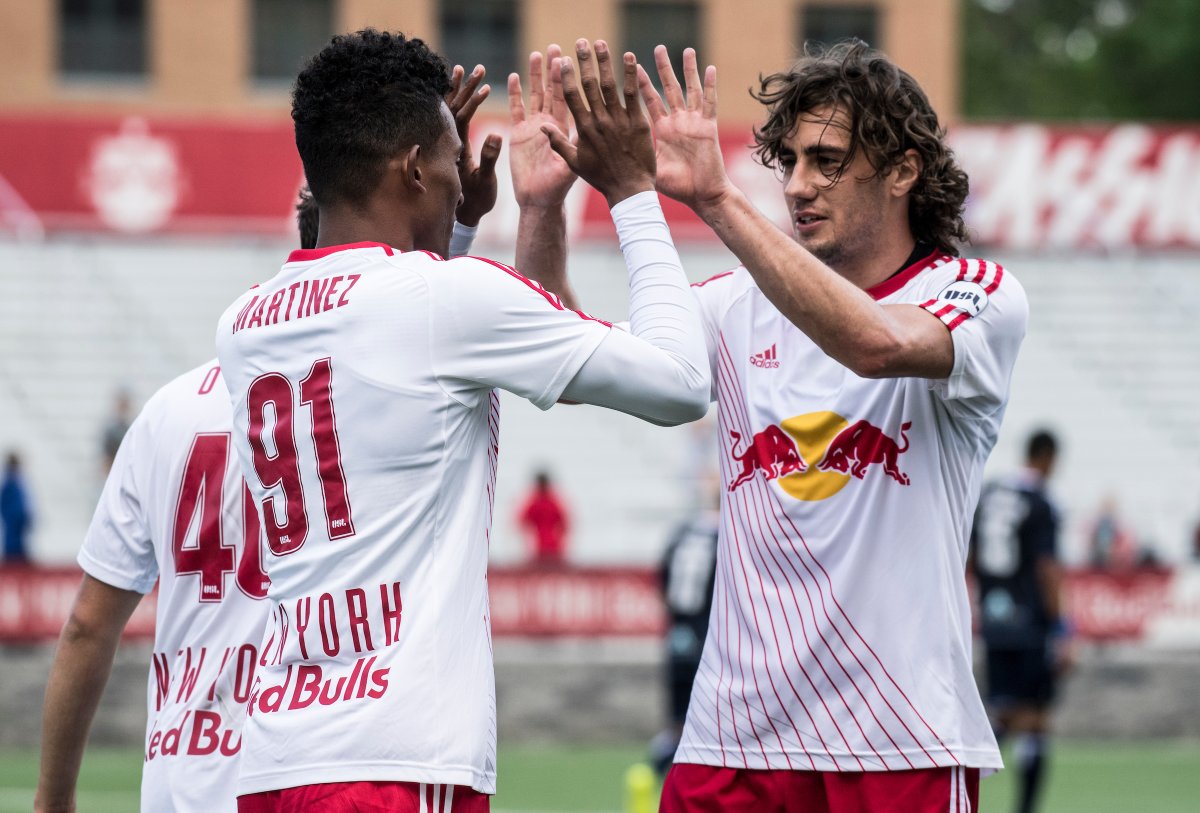 The first double game week of the USL season brought some interesting results.

New York Red Bulls II ended a three-game losing streak in impressive fashion. A game-winning goal from  Derrick Etienne saw Red Bulls II topple the Charleston Battery who came into the weekend leading the Eastern Conference. It was a surprising result given the recent form of the two teams but the Battery were unable to deal with Red Bulls II on set pieces.

Following an impressive result in the Canadian Championship first leg against Toronto FC, Ottawa Fury FC rode a wave of confidence to victory over the Richmond Kickers. In a game that saw eight goals, it was a 21 minute period that put the game out of sight for the Fury, who scored three unanswered in the final 21 minutes of the game leaving the Kickers searching for answers.

Here’s a look back at this weekend’s action:

The Rangers home-unbeaten streak came to an end at the hands of San Antonio FC. The match was a goalkeeper’s dual with Diego Restrepo and Adrian Zendejas turning in strong performances. Ultimately, it took just a single goal to decide the tilt. Mark O’Ojong’s winning effort came on a cross from the right side from Kris Tyrpak. O’Ojong powered the ball home with a bouncing header. The win pushes San Antonio’s unbeaten streak to 11 games.

Ottawa Fury FC won their second straight in a come-from-behind victory over Richmond Kickers. Richmond looked well on its to victory after taking the lead in the 59th minute. Ottawa scored three unanswered goals in the final 21 minutes to record the victory. Ottawa had not won back-to-back games yet this season. Sito Seaone scored his third goal in two games, and Ottawa is now sitting in the top half of the table in the east.

The acquisition of Danni Konig is starting to pay dividends for FC Cincinnati. The Danish forward scored his third goal in two games and powered Cincinnati to a 1-0 victory over Toronto FC II Saturday night. Tyler Polak picked out Konig’s head at the back post for the goal. Despite the shutout loss, Toronto showed signs of improvement and created a number of good chances, including forcing a goal line clearance and striking the post.

The Charlotte Independence walked out of Orlando winners of their second straight match. Orlando City B scored first when Albert Dikwa chipped Cody Mizell in the 20th minute. Orlando continued to push the match for much of the first half, but Mizell kept the score at 1-0 with some big saves. The Independence snuck back into the game in the 40th minute when David Estrada tapped in a cross from Alex Martinez. Enzo Martinez scored the game-winning goal just five minutes later. Jorge Herrara opened up the Orlando defense with a slalom run, and then laying the ball off to Martinez for the goal. Orlando added a third just after the half from the aforementioned Jorge Herrara. The Independence are on the rise, winners of three of their last four games.

Neill Collins 87th minute equalizer canceled out Jose Angulo’s opener for Tampa Bay Rowdies to squeak out a draw against Saint Louis FC. The Rowdies showed grit in the come from behind draw, especially coming off of a game midweek. Finishing will need to be a priority for the Rowdies going forward though, as they controlled the match and created chances, but were unable to keep them on frame.

Jordan Burt’s equalizer canceled out Antoine Hoppenot’s 85th-minute go-ahead goal in the 88th minute as the Colorado Springs Switchbacks drew Reno 1868 FC. The 3-3 draw was a back and forth affair. Reno jumped out to a 2-0 lead at the end of the first half. The Switchbacks answered right back to start the second half with two goals in the first twelve minutes of the second half. The draw stopped Reno’s three-game winning streak but still sees them undefeated in their last five games.

The Roughnecks are climbing up the table in the Western Conference as the win propels them to third. Joaquin Rivas got the scoring going in the 17th minute. He pounced on a rebound from Juan Caffa and fired it home past Timbers 2 keeper Wade Hamilton. Following a handball in the box, Caffa would drive home a penalty in the 25th minute. The penalty was Caffa’s fourth goal of the season and it gave the Roughnecks an early 2-0 advantage. Timbers 2 would make things interesting by pulling one back in the 35th minute.  Villyan Bijev beat the Roughnecks on the counter to bring Timbers 2 within one but that’s as close as they would get. Right before the half, Ian Svantesson scored the dagger on an empty net giving Tulsa their final 3-1 victory.

Phoenix Rising continued their trend of alternating wins and losses by traveling to Los Angeles and earning a win. A brace from Jason Johnson was enough to power Phoenix in a comeback victory. The advantage was in LA’s favor in the 13th minute following a goal by Ariel Lassiter. Lassiter slipped behind the Rising backline and was expertly found by Ethan Zubak for the goal. Phoenix would equalize in the 31st minute through Johnson’s first goal. Eric Avila drew a penalty in the 61st minute for Johnson’s winner completing the brace.

New York Bulls II looked destined to lose their fourth straight match after conceding a free kick goal just before halftime to Charleston Battery’s Justin Portillo. Red Bulls II battled back in the second half with two set-piece goals to end the Battery’s seven-game undefeated streak. The midfield limited the Battery to just 40% possession and just three shots on target. Junior Flemmings scored his fourth goal of the year. Derrick Etienne’s game winner in the 75th minute was his first of the season.

Bethlehem Steel broke a two-game losing streak to move above the red line in the Eastern Conference playoff picture. On his record-breaking day, captain James Chambers became the team’s all-time leader in starts with 30 and opened the scoring in the 30th minute. 10 minutes later, Seku Conneh would double their advantage. Following a pinpoint pass from academy product Yousuf Samuel, Conneh took one touch before slotting it home for his fifth goal of the season. Harrisburg was able to pull one back following a set piece in the 80th minute. James Thomas laid the ball off for Danny DiPrima who slotted it home past Jake McGuire. Corey Burke would put the game to bed in stoppage time from the penalty spot. Substitute Joshua Heard was pulled down from behind in the box and Burke would put the game out of reach.

In a gritty match, Sacramento Republic was able to earn a point in the dying moments. Danny Barrera found Trevin Caesar to give Republic the lead in the 60th minute. The lead wouldn’t last long as Sounders 2 would score two quickfire goals.  Brian Nana-Sinkam beat the Republic backline on a set piece in the 78th minute. In the 86th minute, David Olsen was able to slot what seemed like the winner past Sacramento’s keeper, Dominik Jakubek, giving Sounders 2 the 2-1 lead. Following a bad clearance on a corner, Tyler Blackwood fired in the equalizer for Sacramento three minutes into stoppage time.

The Monarchs continue their winning ways, doing everything that they can to keep pace with San Antonio atop the Western Conference with a comprehensive road win. The Monarchs rode a quick start to their sixth straight victory in a row which is a club record. Taylor Peay opened the scoring for the Monarchs by nodding a Nick Besler pass into the net. The assister became the scorer in the 21st minute as Charlie Adams delivered a pinpoint corner that Besler headed into the net. Vancouver pulled one back in the 78th minute through Terran Campbell but ultimately it wasn’t enough.