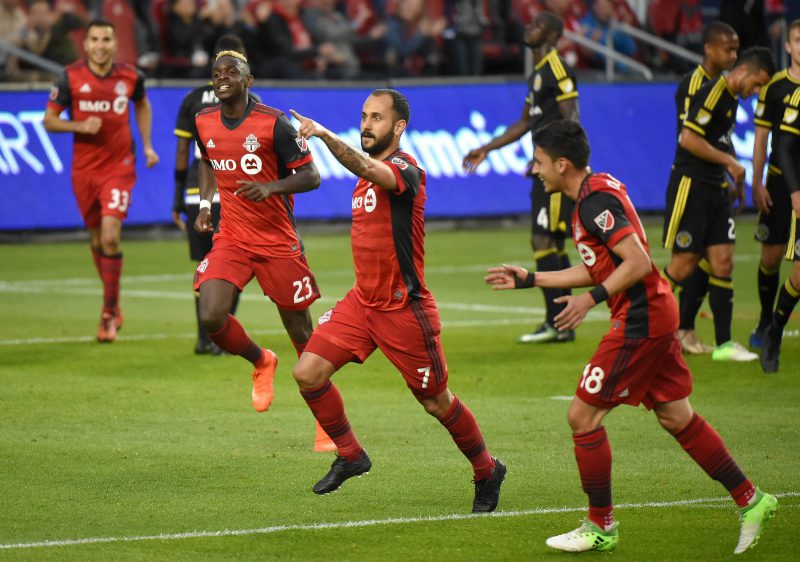 TORONTO — No Sebastian Giovinco, no Jozy Altidore, no problems.

Toronto FC was missing its two top scorers, but it still managed to extend its unbeaten streak as it shut out the Columbus Crew 5-0 at BMO Field on Friday night.

A sixth-minute penalty opened the scoring early for TFC after Jonathan Mensah hauled down Tosaint Ricketts in the box. Victor Vazquez, who provided the assist to Ricketts, opened the scoring from the spot. Vazquez doubled his tally with a sublime free kick in the 59th minute. Justin Morrow, Jonathan Osorio and Jordan Hamilton were also on the scoresheet.

TFC is now unbeaten in eight straight MLS matches and remains on top of the Supporters’ Shield standings with 29 points. Toronto’s last defeat in the league came against the Crew, who won 2-1 at MAPFRE Stadium back on April 15. The Reds have won seven games during their undefeated streak.

The Crew tried to counter TFC’s 3-5-2 system with a new-look 4-1-4-1 formation with Wil Trapp as the deep-lying midfielder and Ola Kamara up top. Federico Higuain and Justin Meram started centrally to add creativity and a scoring threat from midfield.

Kamara, Higuain and Meram have combined to score 18 of the Crew’s 20 goals this campaign, but TFC was up to the task. Michael Bradley contained the latter two, preventing two of the league’s most dangerous players on the ball from having a major impact in the center of the field.

Vazquez was equally impressive on the night as well. The Spaniard was the focal point to Toronto’s attack as he consistently found space between the lines and picked out killer through balls throughout the game.

Ricketts was also highly influential. The Canadian international was troubling Mensah with his speed and had a couple of chances to double TFC’s lead following the penalty.

The Crew eventually took control through the midway point of the first half. The visitors had a legitimate handball shout after defender Drew Moor appeared to handle the ball as he attempted a diving header in his own box. However, the referee and his assistants did see the incident.

With the Crew hunting for an equalizer, TFC pounced on the counter. Ben Spencer — making his MLS debut on Friday — picked out an onrushing Morrow on the left flank and he powered the ball past goalkeeper Zack Steffen for Toronto’s second goal of the match.

Vazquez continued to threaten the Crew’s defense, nearly capitalizing on a giveaway by Harrison Afful. Eventually, the midfielder completed his brace via a free kick, sending the ball underneath the wall and past Steffen into the bottom-right corner.

Osorio joined in on the scoring late in the second half with a calm finish on a partial break against Steffen to add TFC’s fourth of the evening.

The night was not perfect for TFC, though, as Marco Delgado was sent off with less than 10 minutes left after an aggressive foul on Trapp. Hamilton rounded off the scoring shortly thereafter to cap off an emphatic performance for Toronto’s attack.

The loss keeps Columbus in fifth place in the Eastern Conference on 19 points, just one behind third-place New York City FC. This is the first time the Crew has conceded at least four goals in a match this year.

There were a few candidates, but without Victor Vazquez‘s vision, TFC would not have created nearly as many opportunities in the game.

One of the best sequences in the game fell to Ben Spencer, who shook off Wil Trapp and set up Justin Morrow with the second goal of the night.