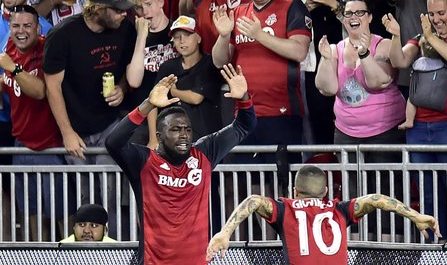 TORONTO — It took nearly an hour to find a breakthrough, but Toronto FC managed to defeat D.C. United 2-0 at BMO Field on Saturday night.

Despite the attack’s struggles, TFC eventually found the winner through Jozy Altidore, who ran onto a perfectly weighted long ball by Sebastian Giovinco before slotting past Bill Hamid. Jordan Hamilton doubled the lead with five minutes left off Giovinco’s corner.

The win was Toronto’s sixth straight at home, the joint-longest streak in its MLS history. TFC last recorded six consecutive victories at BMO Field between the 2009 and 2010 seasons.

This was arguably the Reds’ toughest home win to date this season, as D.C. shut down most of Toronto’s attacks throughout the night. The hosts could not find any space in the box, with Kofi Opare man-marking Altidore and Steve Birnbaum closing down Giovinco.

The only real opportunity in the first half fell to Steven Beitashour off a Justin Morrow cross, but Beitashour fired a bullet header wide of Hamid’s goal.

Beitashour returned the favor to Morrow early in the second half. However, the ball shot right across the six-yard box with a sliding Morrow narrowly missing an opening goal.

Eventually, TFC struck after an exceptional cross-field ball by Giovinco to Altidore. The U.S. Men’s National Team striker took it well off his first touch and finished with the outside of his boot.

The Reds looked motivated after Altidore’s strike and continued to press D.C.’s backline. Eventually, Hamilton converted off a Giovinco corner in the 85th minute to secure all three points for Toronto.

The win keeps TFC on top of the East with 32 points. D.C. remains rooted at the bottom of the conference on 15 points.

Saturday was also Michael Bradley’s 100th appearance in all competitions for TFC. He is the fourth player in club history to reach the feat after Morrow, Ashtone Morgan and Jonathan Osorio.

Sebastian Giovinco‘s two assists were the difference, and his pass to Jozy Altidore may very well be the pass of the week in MLS.

There is no doubting that Jozy Altidore‘s goal was the game-changer. The deft touch and skilled finish with the outside of his boot were impressive.

None of D.C. United’s attackers were influential, but Luciano Acosta has the ability to change matches, and he failed to do so on Saturday.