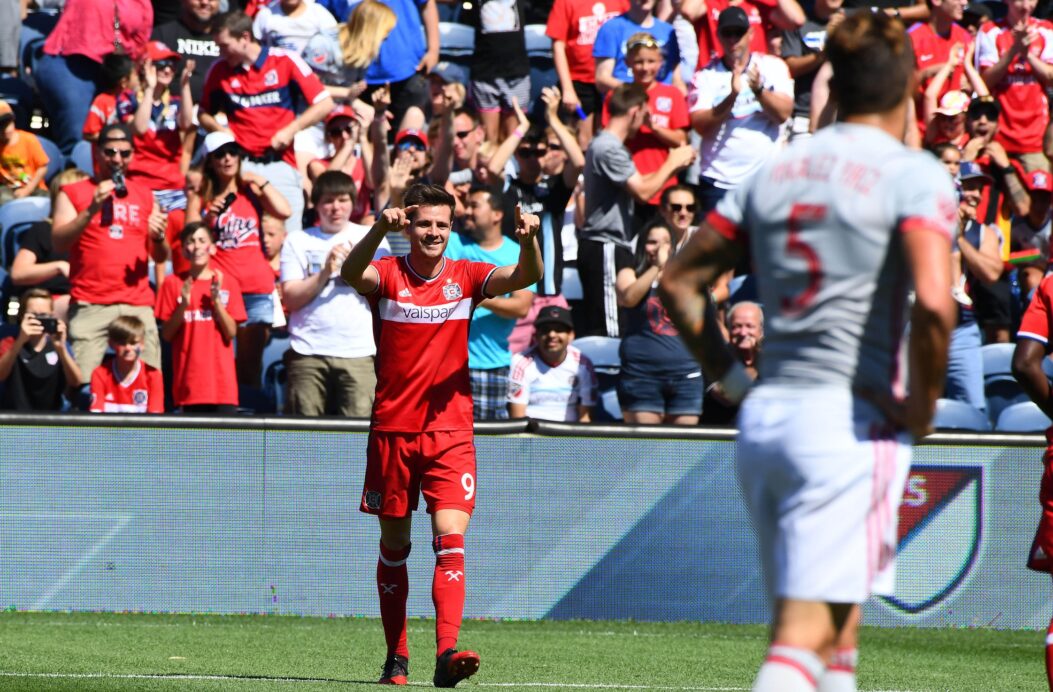 Veljko Paunovic’s side used a goal in each half at Toyota Park on Saturday to defeat visiting Atlanta United, 2-0.

Both sides had early chances to take the lead as Matt Polster saw his ninth-minute header saved for the hosts, while Yamil Asad also saw his header saved for the visitors. Leading scorer Nemanja Nikolic struck the left post after 14 minutes, from a right-footed effort.

However, the Fire broke the deadlock on the verge of the half-hour mark.

Luis Solignac’s right-footed shot from inside the box beat Alec Kann to the center of the goal. It was the Argentinian’s third goal of the season, and his first since May 14.

Greg Garza had Atlanta’s other good effort in the opening 45 minutes, but Matt Lampson was up to the task.

David Accam saw his second effort of the day saved by Kann after 54 minutes, while Polster again couldn’t find the back of the net. The match got flipped on its head in the 69th minute as Tyrone Mears was whistled for handball inside the box.

Nikolic converted the penalty to the bottom right corner for a 2-0 Fire lead. It was the Hungarian international’s 12th goal of the season, and his fourth in his past five appearances.

After going down 2-0, Atlanta United could not force another save from Lampson, who was only called into action twice in the match. The return of Josef Martinez and substitutions of Miguel Almiron and Brandon Vazquez failed to do much for Tata Martino’s side.

At the final whistle, the Fire extended their unbeaten run to seven matches, with another home victory. Kann made four saves, while offensively Atlanta United failed to get anything going.

The Fire (8-4-3) now sit on 28 points this season, and next travel to the New England Revolution a week from today. Atlanta United (5-3-6) have lost back-to-back matches, but return home to face the Columbus Crew on June 17th.

Fire midfielder Luis Solignac deserved Man of the Match honors after scoring what proved to be the winner in Saturday’s victory. Despite only have five completed passes in the match, Solignac came up with the good when his team needed it. He also only lost possession three times, which was the second fewest by a Fire starter.

The penalty kick goal by Nemanja Nikolic really stamped the final score in place for Chicago. With one starter on the bench to start, and another key starter just returning to the squad, Atlanta United really struggled offensively. Nikolic’s goal sealed the deal for the Fire, who were worthy winners.

Atlanta United striker Hector Villalba really struggled for the visitors on Saturday. The 22-year-old Argentinian had four shots in total, but neither ended up on target. If he wants to have any chance of staying in the line-up with Josef Martinez back in the mix,  he will need to have a quick turnaround.