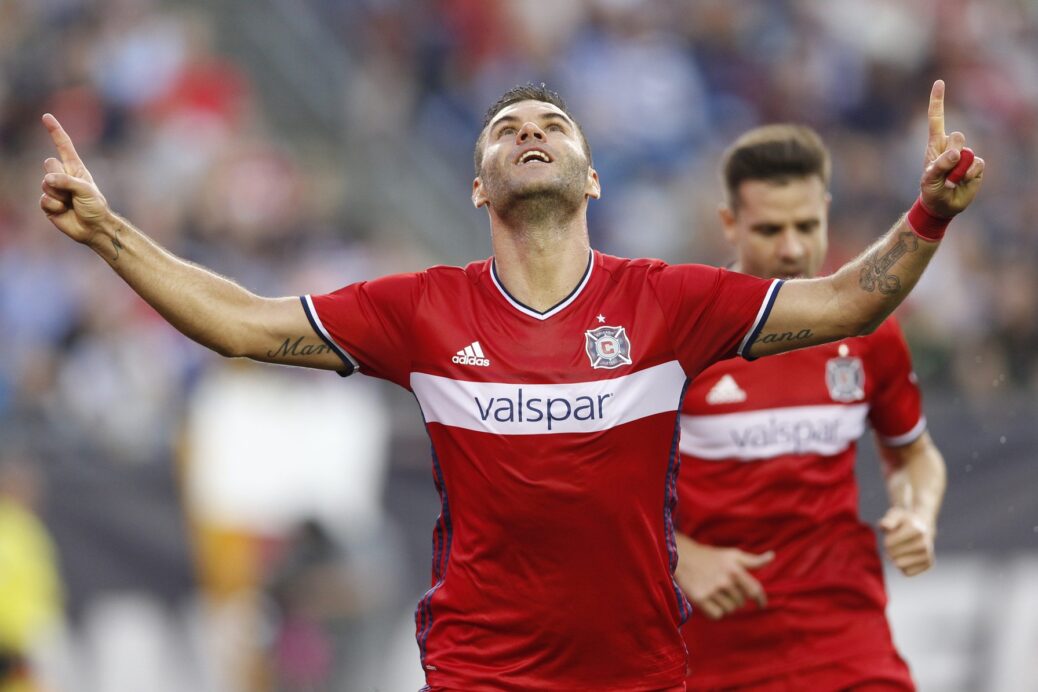 The Chicago Fire’s road form has been the team’s lone downfall so far this season, but Saturday’s visit to Gillette Stadium proved a rare successful trip away from home.

Goals from Nemanja Nikolic and Luis Solignac led the Fire to a 2-1 win over the New England Revolution at Gillette Stadium. The win pushes the Fire’s road record to 2-3-3 on the season. They are also the first team to eclipse the 30-point threshold this season.

Nikolic opened the scoring early, firing his league-leading 13th goal of the season in the 18th minute. After beating the offside trap, Nikolic found himself all alone on Cody Cropper. The young goalkeeper made the initial save on the near post but Nikolic was left with little more than a tap-in on the rebound to open the scoring.

Solignac provided the eventual game-winner 15 minutes into the second half, but it’s Michael de Leeuw who deserves the credit. On a through ball over the top, de Leeuw’s magical first touch flicked the ball into Solignac’s path, leaving a one-on-one finish for 2-0.

The Revs had plenty of chances of their own, but just failed to take advantage of a majority of them. Fire goalkeeper Matt Lampson made several big saves for the Fire, but it was Diego Fagundez’s outstretched miss on an open net that proved the best chance for the struggling Revs.

Eventually, the Revs broke through on a 70th minute goal from Antonio Milnar Delamea, but the consolation finish was just that: a consolation.

With the road win in their back pocket, the Fire now return home to face Orlando City next weekend while the Revs visit Toronto FC next time out.

Nemanja Nikolic can’t stop scoring. The forward netted yet another goal to open the match on Saturday before earning a hockey assist on the Fire’s second of the night.

Luis Solignac’s finish, and Michael de Leeuw’s setup that preceded it, proved to be the winner in a good road win for the Fire.

Diego Fagundez was almost certainly one of the Revs’ most active attackers, and he likely deserved a goal. He will be frustrated not to have scored one in a match where he created plenty of chances.