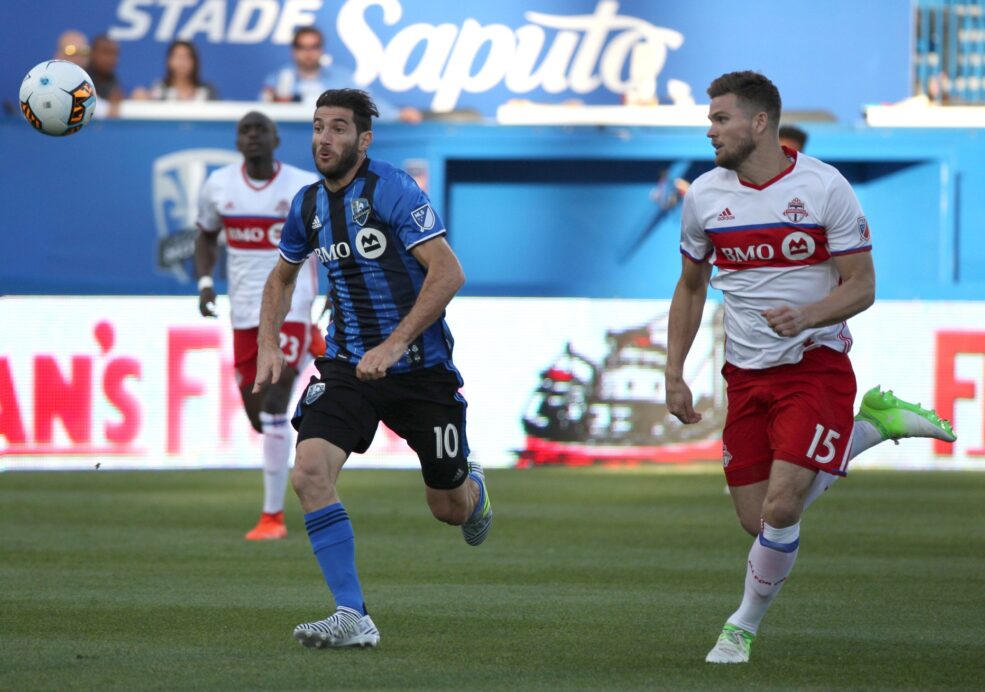 Another chapter of the Montreal-Toronto rivalry was written on Wednesday night. The moment to take away from the first leg of the Canadian Championship final, which ended in a 1-1 draw, was the play that led to Toronto FC’s equalizer.

Not only was this an important away goal for TFC, it was also a crucial loss for the Montreal Impact. On the play, Daniel Lovitz fell to the ground in the middle of the box but the play continued and Toronto capitalized on the confusion to tie the game up. Lovitz was stretchered off the field moments after the goal and substituted for Hassoun Camara.

The issue surrounding the play was the fact that the men in red did not send the ball out of bounds. The Impact bench was furious about the decision and head coach Mauro Biello made sure to make his displeasure known to the fourth official.

“Obviously they’re attacking and if you see the picture of his knee, you’re gonna see something incredible because it was split right open, like a huge gash,” said Biello. “In the end, that’s the choice they made and if it happens our way we’re gonna know how to react too.

“I would understand if he was higher up the field and they were attacking but he’s a defender in the box that went down.”

TFC head coach Greg Vanney, on his side, said that he did not exactly see the events that led to the goal.

“I thought he got up at first and maybe he went back, I don’t know,” said Vanney. “But when you’re in the game and things are happening, sometimes you’re not taking account for everything that’s going on away from the goal, away from the play.”

On the players’ side, Chris Duvall seemed more diplomatic about the situation.

“I don’t think any of us knew what was going on with Lovitz at the time,” Duvall said, “and they had the ball in and around out 18-yard box so it would’ve been nice to see [the ball go out of bounds] but we should’ve expected it because I think we would’ve done the same thing.”

“I’m comfortable, I’ve played there before,” said Duvall. “Everyone at this level should be able to use both feet. If I’m called to play there, I’ll play there.”

With the away goal in hand, Toronto has the luxury of closing the Canadian Championship final in front of their home crowd. If this isn’t enough, Toronto will want to lift the Voyageurs Cup to avoid playing the Impact a third time in a knockout game to decide who will represent Canada at the CONCACAF Champions League, which would happen if the bleu-blanc-noir were crowned 2017 champions.

“[Winning on Tuesday] is important,” said Vanney. “We are in the midst of a very busy schedule and because a) It’s a one-off game where everything can happen and b) We don’t want another game in the middle of our schedule later in the year if we don’t need to have one.”

In this recent sky-is-the-limit era of Toronto FC, every trophy is up for grabs. Vanney not only wants one less game to play in a busy MLS schedule, but he wants one more Voyageurs Cup in his trophy cabinet and potentially the first trophy of the CONCACAF Champions League era north of the Mexican border.

“We have the trophy right now in terms of winning it last year and we take pride in being the best team in Canada and that’s something we’re going to strive for and prioritize every year,” said Vanney. “[…] We also have a group that we think could really compete in the Champions League and maybe be one of the first teams to potentially win it.”

“It’s like a playoff game. It’s 1-1. For us, we believe that we can score. They know that we can score,” said Biello. “Today was an off night offensively, but it’s a final and we’re still in it.”