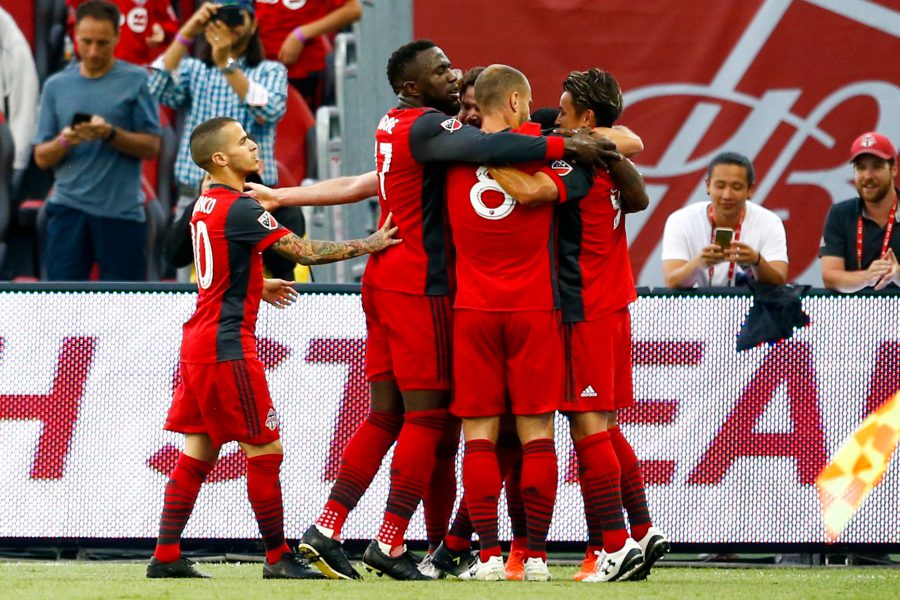 TORONTO — Toronto FC played its third game in seven days against a well-rested New England Revolution side, yet it was TFC who emerged as 2-0 victors at BMO Field on Friday night.

Drew Moor’s goal from point-blank range in the 11th minute and Sebastian Giovinco’s late strike secured a record seventh straight home victory for Toronto. The win also ensures that TFC will remain on top of the Supporters’ Shield standings for another week.

The scoreline did not portray what was an enticing match from start to finish. Controversial no-calls and missed scoring chances for both sides dominated the game.

Armando Cooper, one of eight new faces in the lineup after the first leg of Canadian Championship final on Wednesday, darted past Andrew Farrell before sending a cross into the penalty area. Moor bundled it in at the back post for his first MLS goal since August 20.

Moor was also one of three players who remained in the lineup from Wednesday night. The defender played the full 90 in TFC’s last three games in all competitions, despite recovering from an irregular heartbeat last month.

Toronto continued to penetrate the final third and had a legitimate penalty shout denied after Jozy Altidore appeared to be fouled in the box.

Rowe and Nguyen continually ran at TFC’s defense for the remainder of the first half in hopes of finding an equalizer. Nguyen was particularly lively, though he was often dispossessed.

The second half was more balanced as neither side let up. Revs coach Jay Heaps threw on Kei Kamara and Teal Bunbury to bolster his attack, while Greg Vanney opted for more midfield cover.

New England had a penalty shout of its own early in the half as Andrew Farrell appeared to have been pushed from behind by Benoit Cheyrou, but referee Hilario Grajeda waved away the protests once again.

The game became more chippy as the Revs defenders persistently fouled Giovinco, who had a free kick cleared off the line by Nguyen. The Italian forward remained motivated, though, running at New England’s defense to create space.

One of the best opportunities of the half fell to Bunbury, whose header was somehow denied by Bono in the top-right corner on the brink of second-half stoppage time.

Giovinco sealed the victory deep in stoppage time with a composed finish after a lovely assist by Victor Vazquez.

Toronto doesn’t have a chance to rest just yet, as it takes on Montreal in the second leg of the Canadian Championship on Tuesday night. The Revs return to action on Wednesday in the U.S. Open Cup against D.C. United.

Once again, Drew Moor was outstanding at the back. His goal boosted the Reds’ confidence, and he was a rock in the center of TFC’s defense.

Armando Cooper‘s brilliant footwork, balance and vision to pick out Moor at the back post for the game’s first goal was a joy to witness.

The attack itself generated just three shots on target, but Diego Fagundez was not influential enough for the Revolution compared to Kelyn Rowe and Lee Nguyen.