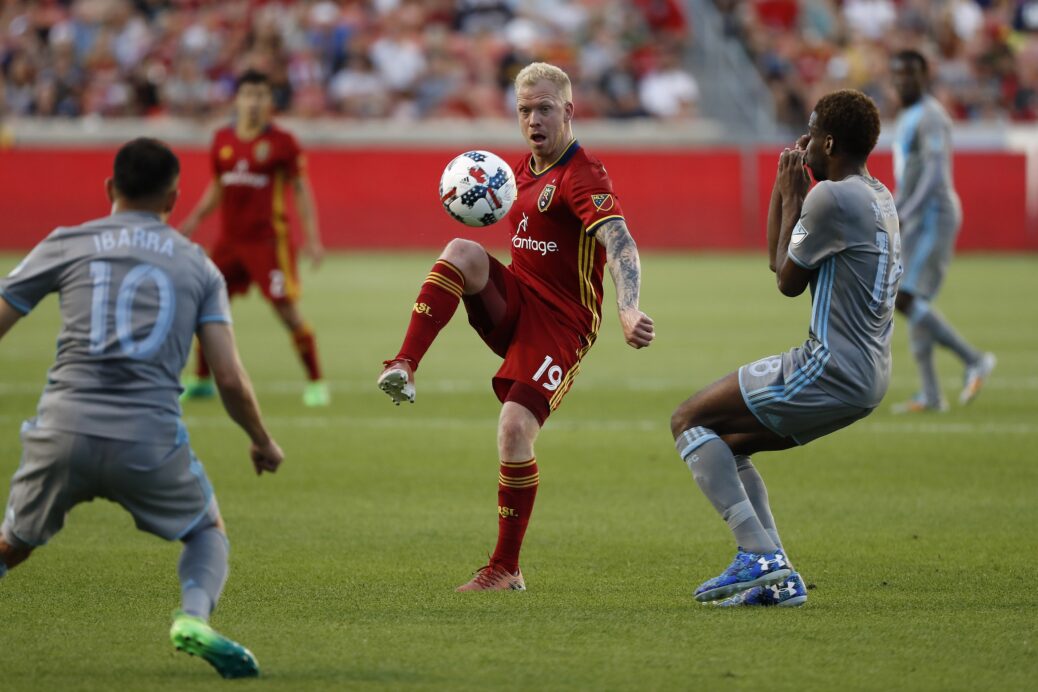 For 80+ minutes at Rio Tinto Stadium on Saturday evening, it looked as if Real Salt Lake would have to settle for a point against visiting Minnesota United.

Yura Movsisyan had other ideas, as the Armenian international came off the bench to score the match winner in RSL’s 1-0 home victory.

Jefferson Savarino’s fourth-minute attempt from outside the box forced an early save for Shuttlesworth, who would only get busier as the match progressed.Shuttlesworth came up big again after 23 minutes, saving Luis Silva’s right-footed effort from the center of the box. Kyle Beckerman’s long-range strike after the half hour mark was also saved, while Justen Glad saw his 37th-minute header also repelled by the 30-year-old keeper.

The Loons best chance in the opening 45 came in stoppage time as Miguel Ibarra’s long-range shot was saved by Nick Rimando.

Savarino’s right-footed shot from the right side of the box struck the bar after 49 minutes, which summed off RSL’s frustration offensively. The Venezuelan international forced another solid save from Shuttlesworth, as the Loons keeper kept it scoreless.

The former Revolution keeper however made his biggest save after 77 minutes, diving to reach Luke Mulholland’s long-range effort which was heading to the top left corner.

Mike Petke’s side finally saw the breakthrough after 84 minutes when substitute Movsisyan pounced on a loose ball and slammed home from close range. Glad’s prior header from a RSL corner was blocked, but the 29-year-old striker made it five goals on the season.

The hosts would hold on for an important home victory, which snapped a two-match losing streak. It was Real Salt Lake’s fifth victory of the season, and their fourth at Rio Tinto Stadium. RSL (5-2-10) jump to ninth in the Western Conference standings, on 17 points and next travel to face the San Jose Earthquakes on June 24th.

Despite a valiant effort from Shuttlesworth, who made eight saves in the loss, Minnesota United (4-2-9) remain in 11th place in the MLS Western Conference. They return to TCF Bank Stadium on Wednesday, to face off with the Portland Timbers.

Coming on as 70th-minute substitute, Yura Movsisyan played the hero role scoring the winning goal for Real Salt Lake. It looked as if nothing was going to get past Bobby Shuttlesworth, but the Armenian striker came up with the good for his team.

Shuttlesworth make several outstanding saves on Saturday evening, but his 77th-minute save on Luke Mulholland really looked to be a turning point. After the 30-year-old saved that effort, it seemed like RSL was going to have to deal with a point. Little did the Loons know, a blocked effort later in the half would lead to RSL’s winner.

Usually a huge playmaker for Adrian Heath’s side, Kevin Molino failed to do much offensively. The 27-year-old was held to one shot on goal, while seeing another effort blocked. If the Loons cannot get much from Molino, they will found it very hard to score goals at all.