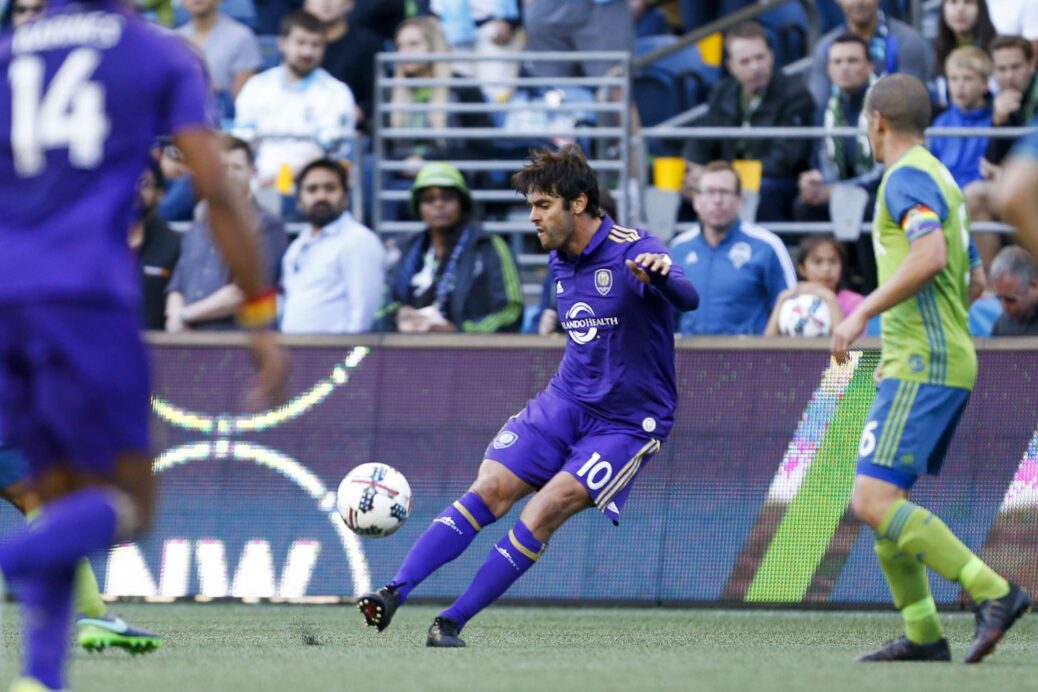 SEATTLE– Sometimes all it takes is a touch of class.

Orlando City was trailing 1-0, had been outplayed all night, and has struggled to find any kind of road result all season. Four minutes of stoppage time had all but evaporated.

But then there is Kaka.

He may not run like he used to, but at 35 he can still send in a free kick. On what would be the last play of the night, the Brazilian legend whipped in a cross that found Scott Sutter unmarked just inside the 6-yard box. Roman Torres and Cristian Roldan double-teamed Antonio Nocerino at the near post, leaving Sutter to slip into space behind them. Sutter made no mistake, dropping low to power a header past goalkeeper Stefan Frei for an unlikely 1-1 draw in front of 42,333 at CenturyLink Field.

Will Bruin opened the scoring with his team-leading fifth goal of the season in the 19th minute, tracking down a deflected through ball from Designated Player Nicolas Lodeiro and rifling a first-touch shot between the left post and goalkeeper Joe Bendik. Defender Jonathan Spector gambled on the entry pass and found himself behind Bruin after failing to cleanly intercept the ball.

For Orlando (7-5-5, 26 points), it was just the third result in seven road matches this season as they seek to regain their red-hot form from early spring. After racing out to a 6-1-0 start to the season, Orlando proceeded to post a dismal 1-4-1 record in May. It was also an important result for a team that will likely be without star striker Cyle Larin for several weeks.

For the Sounders (5-7-5, 20 points), the draw was yet another wild swing in a roller-coaster season that has seen them struggle to find either chemistry in attack or health along the back line. After winning three of four matches before the June international break, they are now winless in two matches since.

Both clubs were facing fixture congestion with weekend matches bookending either side of Wednesday’s tilt, and both fielded slightly mishmashed lineups in response. The Sounders began the match with Brad Evans and Joevin Jones on the bench, while Orlando sat Will Johnson and Jose Aja to start the game.

Orlando was also without Larin after his DUI arrest early Thursday morning. He is out indefinitely as he proceeds through the league’s mandated substance abuse program.

Both teams missed golden opportunities to establish an early lead. In just the third minute, a beautifully placed long ball over the top from Roldan sprang Jordan Morris behind Sutter, but a poor first touch at the doorstep allowed Bendik to scoop up the ball before Morris could gather for a shot.

The hosts had the better possession in the first half and outshot the visitors 7-4, but never managed another clean look. Rivas and fellow speedster Giles Barnes threatened at times as the game opened up near the half, but Orlando’s attack lacked vitality with out Larin, who has provided all but 11 of his club’s goals this season.

Seattle had more than enough chances to find the insurance goal in the second half, but were repeatedly thwarted by either Bendik or their own inability to finish off good buildups.

Morris had a chance to double the lead in the 57th minute, racing into the penalty area with teammates charging the goal, but a heavy dribble allowed Bendik to step up and gather the ball. In a chaotic sequence just two minutes later, Bendik denied Clint Dempsey at the top of the 6-yard box after Bruin backheeled a rolling Morris cross into the heart of the box. The shot ricocheted back to the penalty spot, where Bendik somehow managed to slap the ball away from the feet of a charging Osvaldo Alonso. Danny Toia’s clearance then deflected off fellow defender Tommy Redding before again falling to Bendik as he stretched on the FieldTurf near the penalty spot.

Kaka. Certainly the best players of the game were in the other uniform, but the Brazilian gets the nod for helping his team earn a road point in a season where road points are historically difficult to find across the league.

Stefan Frei’s big save in the just the fifth minute. Seattle dominated the match, but never did find the insurance goal to decompress CenturyLink Field. Perhaps Orlando City escapes with a full three points if Frei doesn’t deliver the goods in the opening minutes.

Jordan Morris. The second-year striker had two good opportunities and twice failed to get off either a pass or a shot, allowing Bendik to scoop the ball off his feet both times. After a sterling close to his rookie campaign, Morris now has two goals in 14 starts this season and looks bereft of confidence.