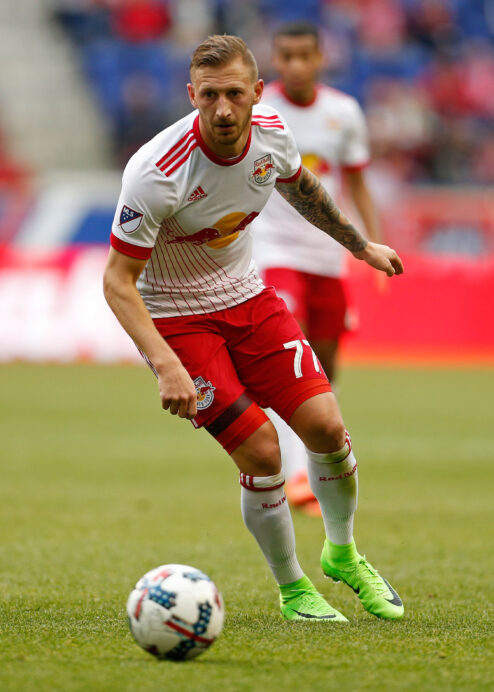 The New York Red Bulls have not defeated MLS opposition in the U.S. Open Cup since 2003. The significance of the Red Bull victory over New York City FC Wednesday night cannot be understated, nor can the man who felled their blue rival.

In his second season with the club, Daniel Royer is becoming a desperately needed complimentary piece of the Red Bull’s offensive puzzle. New York’s scoring woes this season can largely be traced to the reliance on stalwarts Bradley Wright-Phillips and Sacha Kljestan.

Both players are incredibly dangerous when they are operating at peak efficiency, but without contributions from the rest of the team, the Red Bulls attack tends to grow stale and predictable. During New York’s run to their most recent Supporter’s Shield, Mike Grella and Lloyd Sam were regularly contributing to the attack, combining for 19 goals on the season. Last year, the wings contributed just eight goals.

Enter Royer. In his limited time in 2016, Royer quickly established himself as a true winger, the only such player on the Red Bulls roster. Though his time was cut short by injuries, he created the most chances per-ninety minutes over all other wingers on the team. This season, his ability to find the back of the net is what is making him stand out.

Against NYC, the Red Bulls did well to control possession in the first half but had difficulty finding quality opportunities, managing just four shots. Enter Royer. The winger replaced Mike Grella at half time, and the results were measurable. The Red Bulls tripled their output once he entered the game. The majority of those twelve shots came in the opening twenty minutes of the second half, when Royer was most active offensively.

“Danny has been starting for us all year,” said head coach for the night Chris Armas. “Probably second in team goals, right? Four, now he’s got five. What a goal he scored. But it wasn’t an easy decision to not start him either. It’s not just him or Mike. We have three or four guys, Veron included, obviously.

“But, listen, nights like this, I think the tendency to let it go longer, 15 more minutes. Again, you got to win the game. So we have another starter on the bench. We thought, Yes, it would make sense, especially knowing the form Danny has been in.

“I think that we got what we were hoping for. Just the energy, the life, I think we could all see that. I think he was a part of that second half turnaround.”

Royer scored the game winner in clinical fashion, controlling a volley on a pop-up in the box beating two defenders and the goalkeeper. The measured, calm strike was a testament to Royer’s experience and quality, something the Red Bulls need from the wings.

For Royer, it was business as usual. “I saw Bradley’s situation to finish. I was just trying to be in a spot to be an option for him, to pass, but he was in a good spot to take the finish on his own. Then, after the ball got deflected, the ball was in the air and I just tried to have a good touch to put it in and I’m happy that it happened.”

Winning a knockout match is important for a Red Bull side that has struggled to do so over the last two seasons. NYC prepared and played the Red Bulls as many opponents have done over the last two seasons with a great deal of success. By looking for chances on the counter and remaining compact, NYC surely thought the strategy would pay dividends. The addition of Royer into the match, added a new dimension to the Red Bulls attack, and they were able to shake their demons, at least for the night.