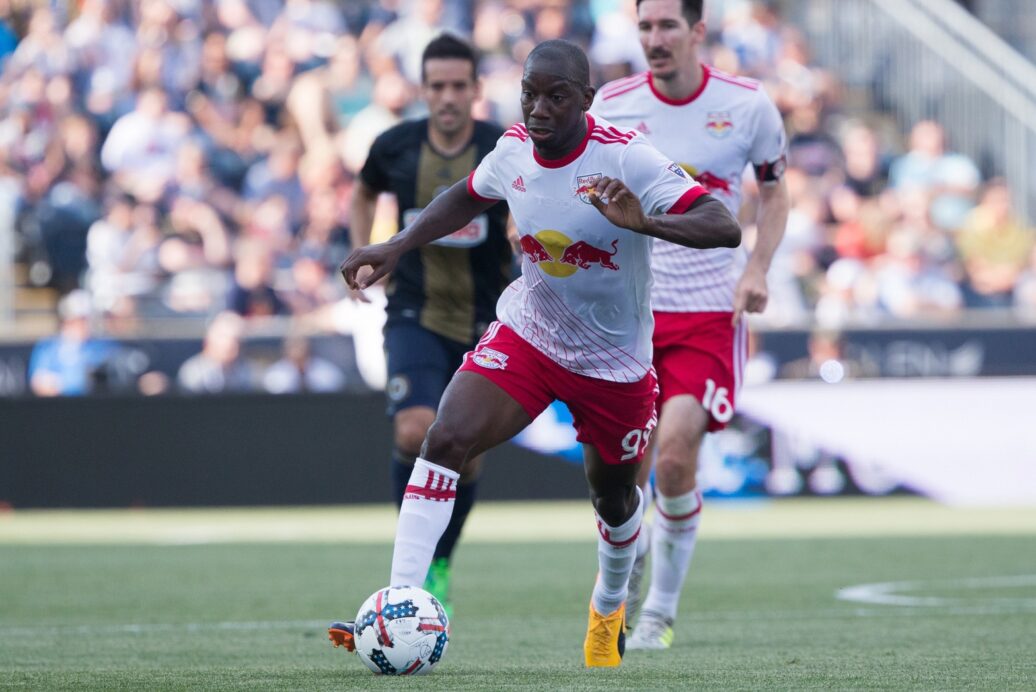 The New York Red Bulls have been two completely different teams this season. Five of their previous six victories have come at Red Bull Arena, with only one coming on the road as the Red Bulls have struggled away from the friendly confines of their home arena.

Jesse Marsch’s side earned their first road win since opening weekend on Sunday, defeating the Philadelphia Union, 2-0. After a frustrating first-half, the Red Bulls were able to use a pair of late goals from leading scorer Bradley Wright-Phillips to sneak out of Chester with three points.

The most important thing, however, was the Red Bulls kept their composure and got the job done against a Union side that was reduced to 10 men after 53 minutes.

Union midfielder Derrick Jones was sent off early into the second-half after catching Red Bulls midfielder Felipe with a two-footed lunge. Despite going up against 10-men for the remainder of the match, the Red Bulls found it tough to break down the hosts until the final moments.

“We earned an important three points against a tough Philadelphia Union side,” said Red Bulls assistant coach Chris Armas. “The red card helped us but it also went against us at times.”

“I give our guys credit, they stuck with the plan and we were able to get the win,” he added.  “We could’ve had a few earlier in the match with Bradley, and they easily could’ve scored a few too.”

Following Jones’ sending off, Alex Muyl struck the post with a 63rd-minute header which was the visitors best chance up to then. Bradley Wright-Phillips was closest to put the rebound away, but saw the ball go the opposite direction after striking the post.

Union keeper Andre Blake made two saves, while his back-line scrambled numerous times to clear blocked efforts inside the box. But eventually, the Red Bulls pressure down the wings finally broke though as second-half sub Kemar Lawrence hit Wright-Phillips in stride at the near post.

“Kemar got himself in some good spots, and has shown the ability to get forward this season for us,” said Armas. “He has helped us in a bunch of moments this season, and he came through again for us tonight.”

After going up, 1-0, the Red Bulls pressure didn’t stop as the London-native doubled his tally five minutes later. This time, Sal Zizzo’s cross from the right-wing hit Wright-Philips who again tapped home from close range. His two goals on Sunday now give the forward eight goals on the year and another two against the Red Bulls’ East Coast rivals.

Since joining the Red Bulls in 2013, Wright-Phillips has scored 84 goals in MLS play. He is looking for his fourth-straight season with double-digit goals.

“I just tried to hang in there and help the team,” said Wright-Phillips, “and at the end of the day it was a good away win.

“I kind of needed a goal, and we needed a win, so overall it’s a good feeling.”

Despite not picking up a goal or assist, Sacha Kljestan ran the show in midfield as expected. The 31-year-old completed 80 passes, which was 17 more than the next player on Sunday evening.

“We haven’t been great on the road this season, but it felt good to get the monkey off of our back,” said Kljestan. “Overall, we bounced back from the 3-0 loss here earlier this season, and we know the Open Cup match against them (Union) will be a big one.”

The Red Bulls capped off a great week, picking up a much-needed road win after defeating local rivals New York City FC last Wednesday evening in the U.S. Open Cup fourth round. Now sitting on 23 points and in fifth place in the Eastern Conference, the Red Bulls will prepare for a home date with NYCFC at Red Bull Arena on June 24th.

“We have a good plan for New York,” Armas said, “but we’re going to enjoy this win and then mentally prepare for what’s ahead.”