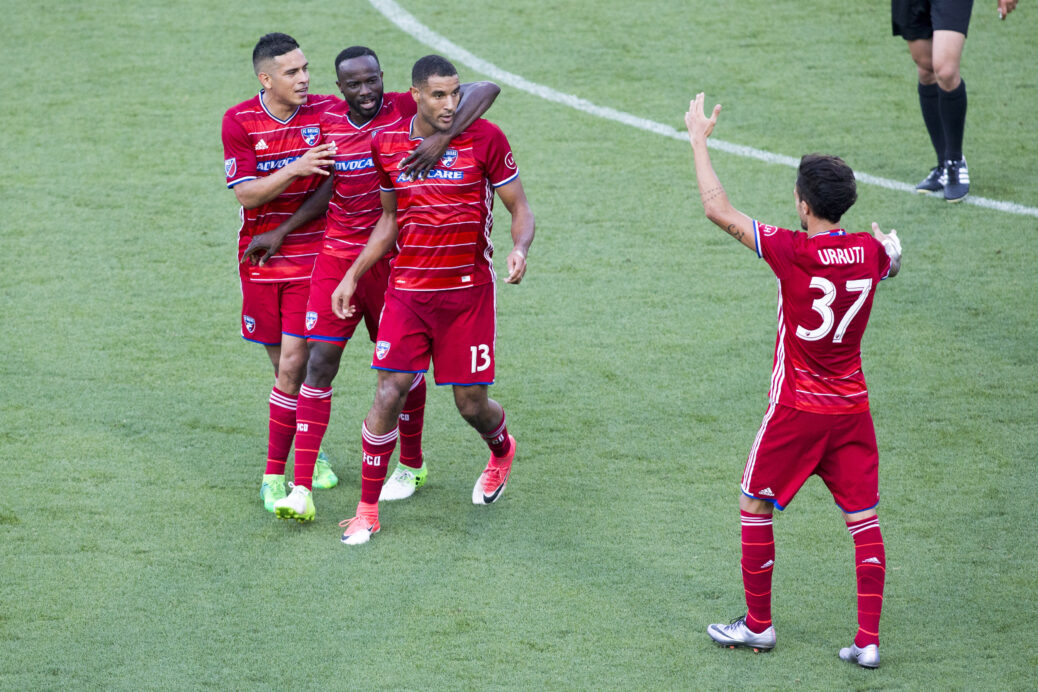 Several shocking results highlighted the Major League Soccer scoreboard this past weekend, which saw numerous changes in the Power Rankings.

Toronto FC found themselves victims of a surprising upset, and the Chicago Fire could only manage a scoreless draw against nine-man Orlando City, leaving FC Dallas as the only one of the top three to earn a win over the weekend. The bottom half also saw some surprising results, with the Montreal Impact claiming a huge win over the New York Red Bulls and the Colorado Rapids earning a victory as well.

Real Salt Lake’s dreadful run of form continued in their loss, while the San Jose Earthquakes also fell to the Portland Timbers.

Here’s a look at this week’s power rankings:

OUTLOOK: Without the likes of both Michael Bradley and Jozy Altidore due to international duty, Toronto looked flat at Gillette Stadium. Also, there looked to be some tired legs after a second leg semifinal match against the Ottawa Fury in the Canadian Championship. With no action until June 17, expect Toronto to get back on track in training.

THIS WEEK: at Portland Timbers on Saturday.

OUTLOOK: After ending the month of May on a four-match winless run, FC Dallas cruised past a slumping RSL side, 6-2, at Toyota Stadium. Roland Lamah netted a hat trick, in just 31 minutes, while the hosts led 5-0 at the interval. Oscar Pareja’s side now have to turn last week’s results into motivation for this week’s road trip to Portland. A win on Saturday at Providence Park will surely give the visitors some needed confidence to kick off their three-game road trip.

OUTLOOK: Following back-to-back defeats to end May, Sporting KC kicked off the month of June, rolling past Minnesota United. An unlikely player played hero as Ike Opara scored the match-winner just before halftime. Jimmy Medranda and Saad Abdul-Salaam also added goals to pad the victory. The hosts were much more dominant against Minnesota, who never really had many efforts towards goal. Remaining unbeaten at home this season, KC could add another important three points on Saturday against the Impact.

OUTLOOK: The Fire were unable to make the most of several chances offensively on Sunday evening, but at least picked up a point in a tough atmosphere. Returning home to face off with Atlanta United on Saturday, Veljko Paunovic’s side should be heavy favorites with a 6-1-0 home record so far this season.

OUTLOOK: After a lackadaisical performance in Atlanta last Sunday, NYCFC took four points from a possible six this past week. Despite allowing a late equalizer against the  Revs on Wednesday, Patrick Vieira’s side bounced back with a late comeback against the Union three days later. Surprising enough, David Villa or Jack Harrison were not on the scoresheet, but Saturday’s win proves that others can pick up the slack when needed.

OUTLOOK: Kicking off their week at home against D.C. United, Orlando City cruised to an easy victory. Despite some very bad refereeing decisions on Sunday evening, the Lions held on for a point against the in-form Fire. Jason Kreis’ side saw two players see straight red cards, but held on against a dangerous Fire attack. Four points out of six is not bad at all, especially for a side that didn’t see Kaka start either match.

OUTLOOK: In a matter of two weeks, Atlanta United looked like a completely different team. After rolling past NYCFC on May 28, Gerardo Martino’s side wassoundly defeated in Vancouver on Saturday. Despite holding an early lead from a Greg Garza strike, the visitors allowed a brace to Kendall Waston while Fredy Montero added some insurance. Heading to Chicago this weekend, Martino will need other players to step up in order to get a positive result away from home.

OUTLOOK: The Galaxy earned a point in D.C. over the weekend, but Curt Onalfo’s side easily could’ve returned home with three ]. With several efforts on goal, the visitors should’ve done better with the chances taken. Extending their unbeaten run to six matches is a plus, and now head into a bye week before starting a six-match run against Western Conference foes

OUTLOOK: After a shocking 1-0 home loss against D.C. United, the Whitecaps bounced back nicely, defeating Atlanta United 3-1 on Saturday. Kendall Waston was the unlikely hero, scoring a brace in the win. Following their bye week, the Whitecaps close a four-match homestand against a tough F.C. Dallas side.

THIS WEEK: vs. FC Dallas on Saturday.

OUTLOOK: Coming into Friday’s date with the San Jose Earthquakes, Caleb Porter’s side was winless since April 22. A brace from Diego Valeri was all the hosts needed, to end their five match winless run. With Darlington Nagbe away on international duty, Valeri and others will look to step up against for the Timbers, who next face off with FC Dallas on Saturday.

OUTLOOK: The Earthquakes have now lost back-to-back fixtures,] against strong Western Conference competition. The good news is that their next three fixtures are at Avaya Stadium, before heading on a three-match road trip. With Chris Wondolowski leading the line, the Earthquakes always have a chance at three points.

OUTLOOK: By Thursday morning, the Crew were feeling fine after a good win against the defending MLS Champions. However, by Sunday, the Crew were shaking their heads after a 2-1 defeat against one of the league’s worst sides. Sitting in fifth place in the Eastern Conference isn’t the worst thing for Gregg Berhalter’s team, who now can rest up and prepare for some winnable matches.

OUTLOOK: The Red Bulls took a huge step back last weekend, falling. 1-0, in Montreal. Despite having a lot of starters available for the match, Jesse Marsch’s team only created three shots on goal. The Red Bulls are sitting on the edge of the playoff places, and will need to regroup quickly. Following the bye, the Red Bulls head to Chester to face the Union before welcoming NYCFC to Red Bull Arena.

OUTLOOK: With several starters away on international duty, the Sounders ended the weekend better than going into it. After getting crushed by the Crew on Wednesday, the Sounders can thank Will Bruin for playing the hero role on Sunday. Bruin’s goal earned the Sounders three points against the Dynamo, which sets them up nicely going into the bye week.

OUTLOOK: The tale of two teams continued for the Houston Dynamo this past week after rolling to a home victory before falling again on the road. Still, with their home form being as strong as it is, the Dynamo need to get some results on the road to avoid any slides down the table this season. A bye week is important for the Dynamo, who will see several players leave for international duty.

OUTLOOK: The Revs may have had the best week league-wide in week 14. After stealing a draw late against NYCFC in midweek play, the Revs pulled off the upset of the weekend as they halted Toronto FC’s unbeaten streak with a shock 3-0 victory at Gillette Stadium, leaving them feeling good entering the bye week.

OUTLOOK: The Philadelphia Union slumped to a second straight defeat on Saturday, losing a lead, and three points in New York. Jim Curtin’s side have really cooled off since seeing their six-match unbeaten run snapped at RSL on May 27. A bye week, which is next for the Union, will be key before a trio of home matches against Eastern Conference opponents.

OUTLOOK: After a strong victory over Orlando to close the month of May, Minnesota United sunk back to reality, losing at Sporting KC last Saturday. With a lot of their regulars available for selection, the visitors failed to get much going, and easily could have lost by a wider margin.

OUTLOOK: In a matter of a few weeks, the Montreal Impact look to have seen the light. Back-to-back victories over the Timbers and Red Bulls, look to have the Impact on the way up from the Eastern Conference cellar. The next few matches however will be important, as the Impact head on the road for three straight before hosting D.C. United to kick off July.

OUTLOOK: Getting at least a point at Orlando was always going to be tough for struggling D.C. United. However, Ben Olsen’s side earned a point against the Galaxy on Saturday, which was impressive. Scoring only one goal in their last six matches is a huge worry, but a bye week this weekend should be good for the team to rest up and regroup for a tough trip to Toronto on June 17.

OUTLOOK: It’s been a rough season so far in Colorado for the Rapids, but they can enter the international break with some solace as they enter their week off with a win over the Columbus Crew. A lone win won’t turn the season around, but it can serve as a launching pad for further improvement for Pablo Mastroeni’s team.

OUTLOOK: After their 1-0 home win over the Union on May 27th, things looked to be turning up slightly for RSL. A week later, and Mike Petke’s team are coming off back-to-back thumping’s from the Dynamo and FC Dallas .  Even with Kyle Beckerman returning to the starting XI last week, it looked like RSL needs a lot of work during their bye week.