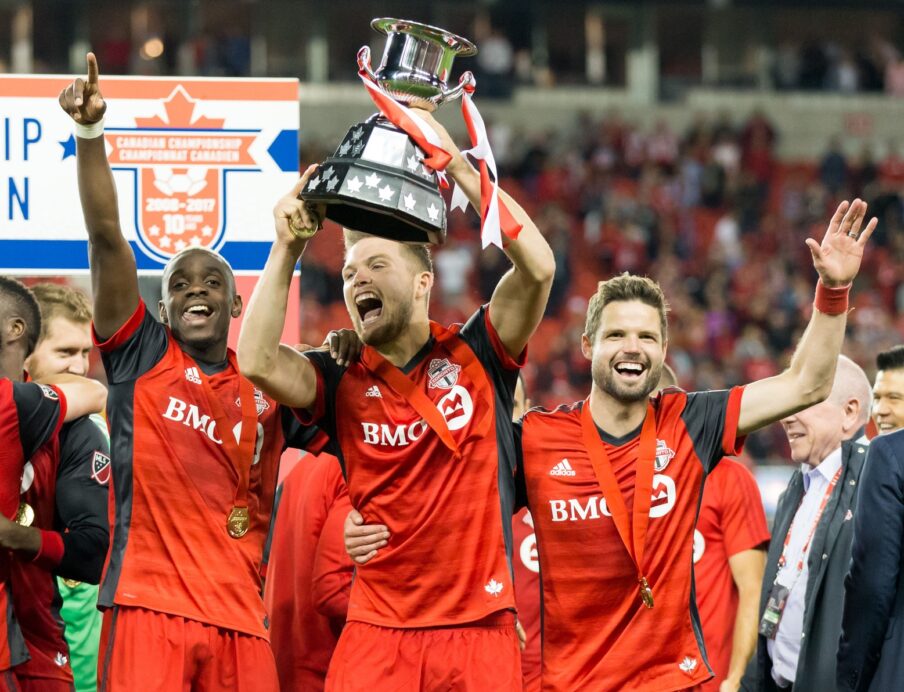 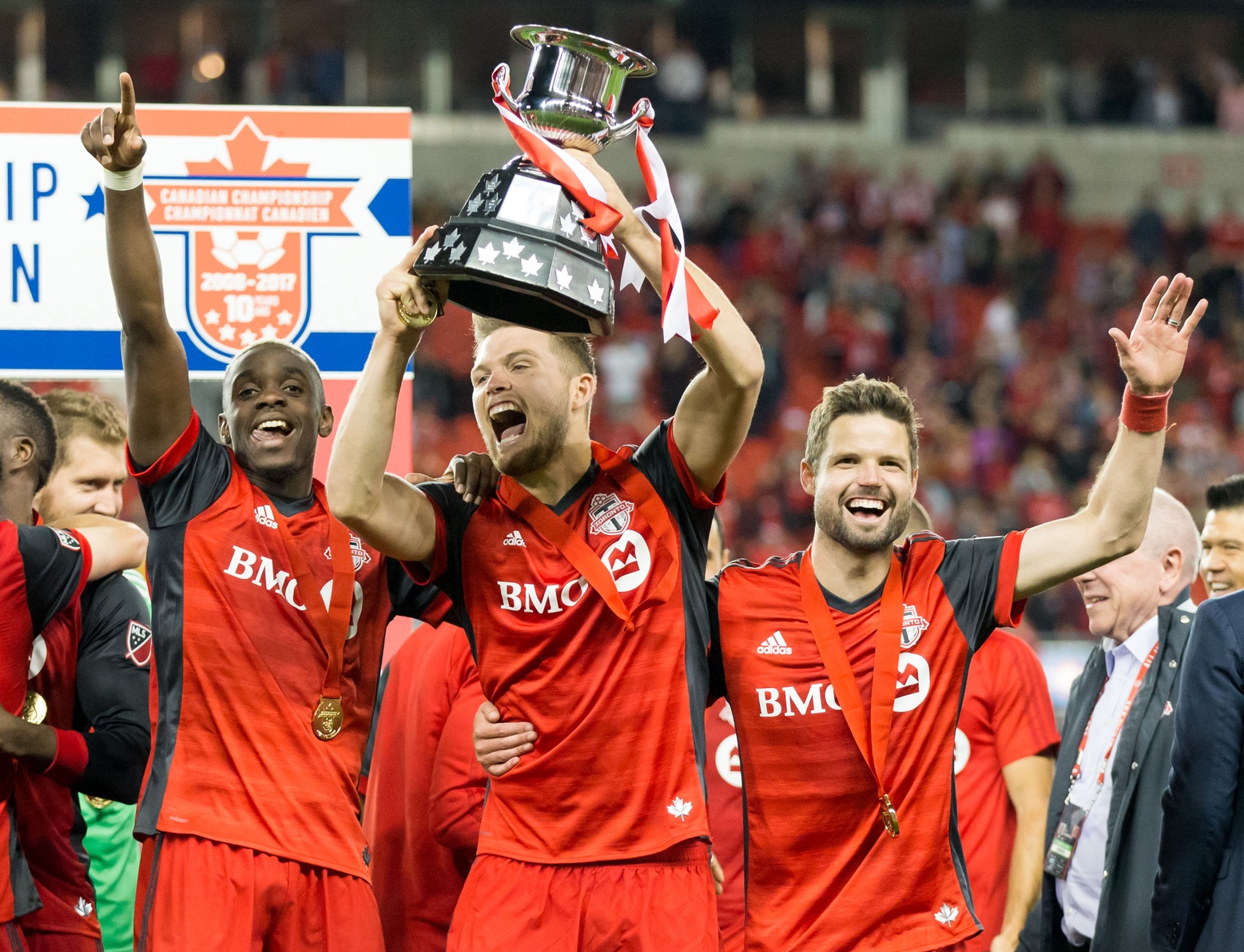 Toronto FC strengthened its hold on the top spot in MLS, but the Chicago Fire continue to look like TFC’s best competition for standing as the best team in the league.

TFC added another Canadian Championship trophy on Tuesday, following up an impressive win against New England to continue a season that is looking more and more like one that could end with an MLS Cup.

The Fire saw their quest for some silverware thwarted by FC Cincinnati in a dramatic U.S. Open Cup Round of 16 penalty shootout, but not before they demolished Orlando City to stay within striking distance of TFC in the East standings.

Sporting Kansas City opened up a five-point lead on the rest of the pack in the West after going on the road to beat the LA Galaxy. Peter Vermes’ squad followed that up with a U.S. Open Cup win over the Houston Dynamo to complete a perfect week.

It was a week to forget for D.C. United, which followed up a loss to the Philadelphia Union with a U.S. Open Cup elimination at the hands of the New England Revolution.

OUTLOOK: A measure of well-earned revenge against the team that put a halt to their eight match unbeaten streak. Toronto FC handled the Revs easily in a 2-0 victory, with an early goal provided by Drew Moor capped off by a late Giovinco finish. On top of that, TFC found time to win the Canadian Championship over the Montreal Impact, with Giovinco delivering the winner. Just another week in the North.

OUTLOOK: Make that nine straight unbeaten, as the Fire simply went off on Orlando City last weekend. David Accam had his best match yet in a Fire jersey, recording his first MLS hat trick en route to a dominating 4-0 win. Losing in penalty kicks to FC Cincinnati was disappointing, especially given the fact the Fire played most of their starters, but Veljko Paunovic will focus on continuing to chase TFC atop the East.

THIS WEEK: vs. Minnesota United on Thursday.

OUTLOOK: Earned the first win in club history at Red Bull Arena, doing so in emphatic fashion with a convincing 2-0 victory. Defender Ben Sweat was excellent in the win, as was Jack Harrison. Will be without Sean Johnson for Thursday’s match against Minnesota United as he takes part in the Gold Cup.

OUTLOOK: Sporting Kansas City walked into the StubHub Center and out with three points for the first time since their 2011 rebrand. An early strike from Roger Espinoza, followed by an absolutely stunning bicycle kick from Ike Opara, was enough to hold off Dave Romney’s late effort and seal the win for Sporting KC.

OUTLOOK: After years of dominating the Texas Derby, FC Dallas has encountered new resistance from the Houston Dynamo in their two meetings this year. After the Dynamo seized an early lead from Erick ‘Cubo’ Torres, Maxi Urruti leveled things for FCD in the second half. The return of Mauro Diaz to the field wasn’t enough to earn the win, however, as FCD had to settle for a draw.

OUTLOOK: It was an up-and-down week for Atlanta United, who started things off with a disappointing 2-1 loss to D.C. United in midweek play. Atlanta bounced back nicely over the weekend by taking a 1-0 win over the Colorado Rapids at home, but then fell to disappointment again as they were beaten at the death by Miami FC in its U.S. Open Cup match. Still, the new week sees them in playoff position, thanks to some help around them.

OUTLOOK: Two matches and two disappointing results for the Timbers last week. First, goals from Diego Valeri and an own goal from Francisco Calvo weren’t enough to avoid losing to Minnesota United on the road. But that loss was overshadowed by a far more disappointing draw, as the Seattle Sounders stole one off the foot of Clint Dempsey to sneak away from Providence Park with a point at the death.

THIS WEEK: at Real Salt Lake on Friday.

OUTLOOK: The Lions were flying high after Kaka’s last second equalizer stole a point on the road in Seattle, but it was a harsh return to their usual road form over the weekend. Behind David Accam’s rapid hat trick, the Fire obliterated Orlando City’s back line en route to a 4-0 win. It’s not over yet though, as their road trip continues on Friday in Utah.

OUTLOOK: The wacky season of the LA Galaxy continued last week. They earned yet another road win, bumping their record to 5-2-1 away from home, with a 3-1 win over the Rapids. But they also earned yet another loss at home, falling to Sporting Kansas City, 2-1, and dropping their record at StubHub to a measly 1-4-3. The good news, oddly, is that they’re on the road again this weekend in San Jose.

OUTLOOK: A bad showing by the Red Bulls saw them outplayed at every turn by NYCFC, falling for the first time at home in the series. With their attack effectively neutralized, the Red Bulls couldn’t hold off the NYCFC counter attack and surrendered two goals to their cross-river rivals. The good news is that Jesse Marsch and company have an off week to work on their issues, and managed to stay alive in the Open Cup on Wednesday evening against the Union.

OUTLOOK: The Whitecaps went on the road to Minnesota last weekend, and thanks to efforts from Christian Techera and Tony Tchani, escaped with a point. Still, having surrendered a 2-0 lead is disappointing, even on the road, and this weekend’s road trip is an even tougher challenge in Chicago.

THIS WEEK: vs. LA Galaxy on Saturday.

OUTLOOK: Two goals from Danny Hoesen and Marco Urena were enough for the Quakes to hold on for the victory last weekend, though a late sending off of Nick Lima allowed RSL to pull one back and make them sweat. Three points is three points, however, even if they proved to be the last that Dominic Kinnear earned in charge of his team.

THIS WEEK: at Colorado Rapids on Saturday.

OUTLOOK: While a draw isn’t the perfect result, the two points they’ve gotten out of FC Dallas this season represent a significant power shift in this rivalry from recent years, and kept them level on points with their in-state opponents. Now they’ll head to Colorado to seek their first road win of the season, one that could bolster their claim to a top spot in a crowded Western Conference.

OUTLOOK: After Federico Higuain and Anthony Jackson-Hamel exchanged goals in the first half, this match seemed destined for a draw. That all changed when Kekuta Manneh subbed in. The newest member of the Crew had an immediate impact, pardon the pun, scoring the game-winner and helping out on the next two to put away the match in short order. The goals were Manneh’s first of the year and first with the Crew.

OUTLOOK: After being hard-done at the very death by Kaka en route to their 1-1 draw against Orlando City, the Sounders pulled some last-second magic of their own. Clint Dempsey pulled out a 94th minute equalizer in the Cascadia Derby, silencing Providence Park and pulling something away for the Sounders in what seemed like a lost cause.

THIS WEEK: at Philadelphia Union on Sunday.

OUTLOOK: The road struggles continue for the Revs. Despite a solid home record, the Revs sit outside of the playoff spots due to an 0-6-3 record away from Gillette Stadium. That trend continued as Drew Moor and Giovinco put a quick start and late finish on a 2-0 loss for the Revs. They need to turn things around on the road, and that could happen this weekend in Philadelphia.

THIS WEEK: vs. New England Revolution on Sunday.

OUTLOOK: Only one goal came out of Philadelphia on Saturday, but it was on the right side of things for the Union as Fafa Picault scored a half-hour in for the victory. The win was almost overshadowed, however, by some incredible sportsmanship from midfielder Haris Medunjanin, who prevented Luciano Acosta from being sent off with his honesty to the referee.

OUTLOOK: The Impact did well to battle back from Federico Higuain’s 17th minute goal, as Anthony Jackson-Hamel leveled things almost immediately after. They didn’t do so well once Kekuta Manneh subbed in during the second half. Manneh scored the 70th minute game winner, and the floodgates opened for the Impact, who surrendered another two late goals. Their winless streak stretches to three, but they’ll hope to cut it short in the capital this weekend.

THIS WEEK:  at New York City FC on Thursday.

OUTLOOK: A win and a draw capped a solid week for Minnesota United, who once again dragged themselves out of the Western Conference cellar. After a strong showing in a 3-2 win over the Portland Timbers, Minnesota battled back well from down 2-0 against the Whitecaps to salvage a draw for a four point week. They’ll face short rest traveling to New York City on Thursday night.

OUTLOOK: It was a mixed-bag of results and performances for D.C. United last week. First, they raised their season goals scored total by 20% in a 2-1 win over Atlanta United in midweek play. Then they returned to their scoreless ways in a shutout 1-0 loss to the Union. By a good margin the lowest scoring team in the league, DCU can’t afford to go scoreless in a bottom of the barrel Eastern Conference match against the Impact this weekend.

THIS WEEK: vs. Houston Dynamo on Saturday.

OUTLOOK: The Colorado Rapids thought things were turning around after winning three straight matches, and then last week happened. Dropping back off to the poor form they’ve been in most of the year, the Rapids lost twice last week. First to the LA Galaxy in a 3-1 disappointment at home, then in a closely contested 1-0 affair in Atlanta. They’ll look to get back to their solid home record this weekend.

THIS WEEK: vs. Orlando City on Friday.

OUTLOOK: After surrendering two goals to the Quakes on Saturday, Real Salt Lake never really looked in the match. They managed to get a consolation goal late after Quakes rookie Nick Lima was sent off, but on the whole it was another disappointment in a disappointing season so far in Utah.