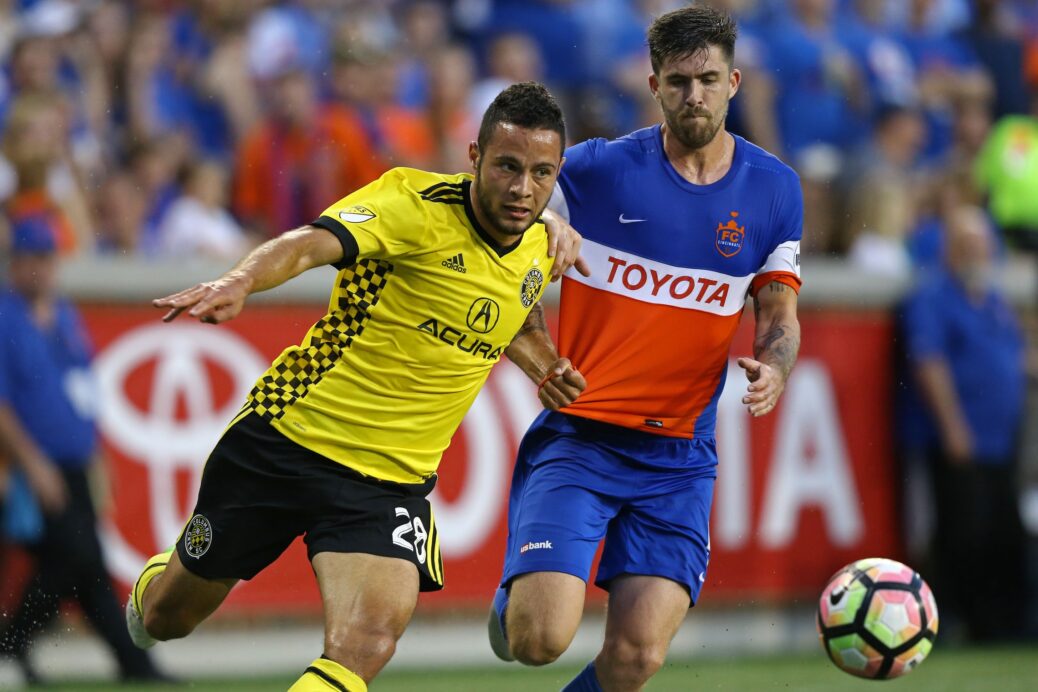 Here’s the full rundown of the fourth round action in the U.S. Open Cup:

The first Cupset of the fourth round belongs to FC Cincinnati and it came in front of a U.S. Open Cup modern era record crowd of 30,160 at Nippert Stadium.

Djiby Fall’s floating header beat Crew backup keeper Brad Stuver in the 64th minute. The Crew had their opportunities late in the match, but were always inches away from finding the late equalizer.

Thunderstorms delayed the start of this match for more than two and a half hours before finally kicking off just after 10:00 p.m. eastern time. Once they did get going, the Battery wasted no time getting started. Forrest Lasso gave the visitors the lead before three minutes had gone by.

The goals kept flying in around the half hour mark. Kevin Kratz got Atlanta United on the board in the 30th, but Dante Marini leveled for the Battery barely a minute later.

The scoring came just as quickly after the start of the second half. Josef Martinez scored in the 48th to tie the score at two. Brandon Velazquez would secure the United win with a goal in the 72nd minute.

The New England Revolution are through the the fifth round after making easy work of the USL’s Rochester Rhinos. The Revs were off and running just before half time. Teal Bunbury buried a spot kick in the 44th minute after a foul in the box by Wal Fall. Insurance goals were added in quick succession in the second half. Donald Smith got one in the 50th minute and Zachary Herivaux bagged the other a minute later.

North Carolina FC tried to send Houston Dynamo home early, but the visitors fended off the NASL hosts with an extra time winner.

North Carolina got started early on through Steven Miller in the fourth minute, but the Dynamo had a reply before the half time whistle as Andrew Wenger tied the score in the 25th minute. Each team found a second just after the hour mark. Dylan Remick put the Dynamo in front in the 62nd minute only to see that canceled out by Lance Laing in the 67th.

The storms rolled in as extra time loomed and play was stopped in the 88th minute. An hour and a half later, the final whistle blew after about six minutes and extra time began. Memo Rodriguez snuck in the winner with a low shot from distance in the 109th minute to allow the Dynamo to survive a scare from an NASL foe.

Miami FC provided the second of the Cupsets on Wednesday night with a standout performance from Stéfano Pinho.

Orlando City was never really in the one as they ran into the Miami FC buzzsaw that was Pinho. It took him all of 25 minutes pf play for him to grab a hat trick between the 30th and 55th minutes. Giles Barnes found a consolation goal for the Lions, but it came well after this one had been decided.

The Union truly outclassed their USL visitors from Harrisburg in this one.

Derrick Jones opened the scoring in the 18th minute and CJ Sapong doubled the lead in the 33rd. City Islanders got a little bit of life in the 37th when Jonathan Mendoza beat Matt McCarthy to cut the lead in half, but the hope was short lived. Marcus Epps restored the Union’s two goal advantage in the 47th minute and his team never looked back.

FC Dallas got a late, late own goal to see them through to the fifth round of the Open Cup.

Dallas went in front in the 31st minute through Coy Craft while controlling the run of play in most aspects. They did concede a second half equalizer, though. The Roughnecks’ Kosuke Kimura leveled the score in the 59th minute. FCD had several close calls after that tally, but it took a stoppage time own goal off Modou Jadama for them to earn their unexpectedly thrilling victory.

New York is red as far as the open cup is concerned.

Daniel Royer’s 67th minute volley was enough to give the Red Bulls the win in the first ever U.S. Open Cup version of the New York Derby. New York City FC has now lost all three U.S. Open Cup matches they have ever played to New York area opponents. The Cosmos had beaten them twice before this season.

The Fire went on the road to their former USL affiliate and took home a straightforward victory.

One goal was all it took for Chicago Fire to get the win in Saint Louis. Luis Solignac found it in the 27th minute. Saint Louis FC did their best to keep up for the rest of the match, but they only put two of their nine shots on frame, which never really troubled Matt Lampson in goal, or the rest of the Fire’s somewhat rotated side.

This match was all Sporting Kansas City all the time as they thoroughly dominated Minnesota United in every aspect.

Two quick goals to end the first half started the scoring. Ike Opara opened it up in the 43rd minute and Gerso Fernandes made it two in the first minute of stoppage time. Dom Dwyer added the third in the 72nd minute and Daniel Salloi finished the carnage in the 82nd to send SKC through to the fifth round.

The Galaxy took simple care of their local USL rivals to make it to the fifth round.

Jose Villarreal got the Galaxy on the board first in the 17th minute, but that was cancelled out by a 26th minute equalizer by Roy Meeus. A penalty thanks to a foul in the box by Salomon Wbias allowed Jack McBean to restore the lead in the 36th minute. The Galaxy victory was secured in the 73rd minute thanks to a goal from Ariel Lassiter.

The Quakes started off strong when Jackson Yueill gave them the lead four minutes in. The flying start continued with Cordell Cato doubling the lead in the sixth. That would be all they needed to get through. They spent the rest of the match absorbing Deltas attacks like nothing and they are into the fifth round with relative ease.

Real Salt Lake’s woes extended into the U.S. Open Cup as they provided little challenge for Sacramento Republic of the USL for the final Cupset of the night.

The destruction continued in the second half. While RSL were busy not creating chances, Sacramento found a fourth goal from a James Kiffie cross finding Danny Barrera in the 71st minute. To tell the truth, RSL were lucky not to have conceded a couple more after that on their way to another unfortunate defeat.