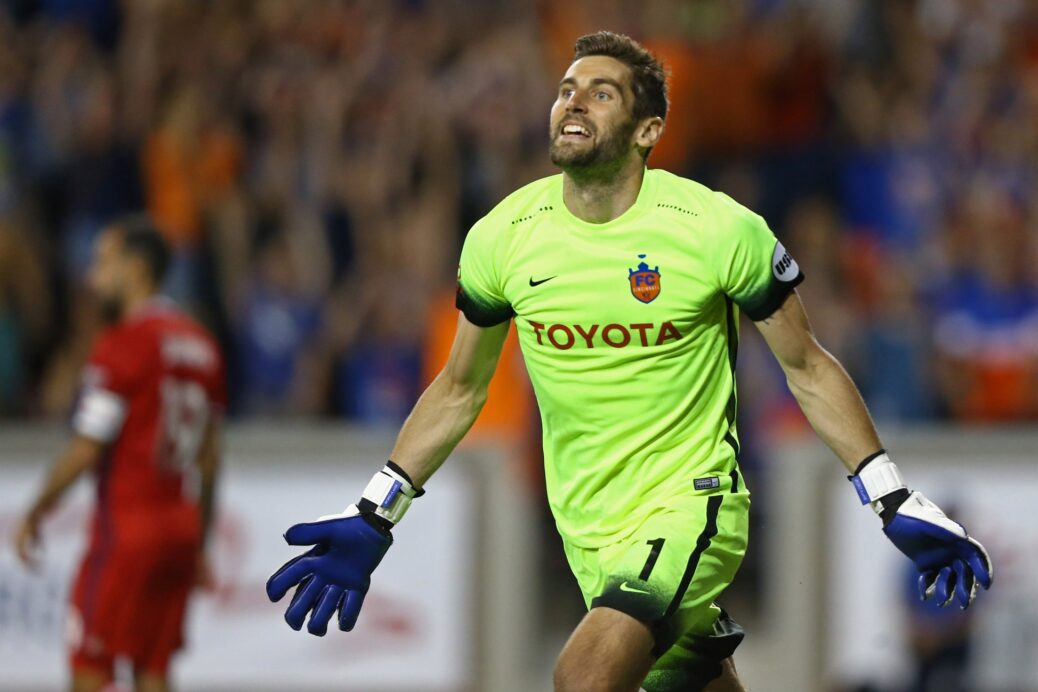 Reigning U.S. Open Cup champs FC Dallas became the first club to book their spot into the tournament’s quarterfinals after defeating the Colorado Rapids on Tuesday evening.  On Wednesday, seven other clubs joined them, with the biggest shocks coming from Miami FC and FC Cincinnati.

The two lower division sides advanced to the quarterfinal round as Miami FC took down Atlanta United while FC Cincinnati defeated the Chicago Fire in penalty kicks. The New York Red Bulls also needed penalty kicks, defeating the Philadelphia Union, a team that had knocked them out each of the past two seasons.

Elsewhere, Sporting KC earned a huge road victory in Houston, while the LA Galaxy avoided an upset against Sacramento Republic.

Here is a rundown of all the day’s Open Cup action:

NASL outfit Miami FC used a 93rd-minute winner from Kwadwo Poku to eliminate Atlanta United, 3-2. The hosts fought back from a 1-0 deficit as goals from Stefano Pinho and Rhett Bernstein put Miami ahead by one prior to the hour mark.

Julian Gressel pulled Tata Martino’s side level after 75 minutes, converting from the penalty spot after Poku fouled Andrew Carleton. The former NYCFC man kept his cool however, finishing from a fast break three minutes into second-half stoppage time to send the second division side into the quarterfinals. This is the second consecutive MLS team ousted by Miami FC after Orlando City fell at home to them earlier this month.

Following a scoreless opening half, Ike Opara opened the scoring just after the hour mark heading home from close range. Gerso Fernandes slammed the door on any Dynamo comeback, finishing off a fast break in the 91st minute with a left-footed effort. The Dynamo only mustered two shots on goal, while Peter Vermes’ side booked their spot into the quarterfinals.

At Harvard University, the host New England Revolution used a goal in each half to down visiting D.C. United, 2-1.

Jose Ortiz opened the scoring for Ben Olsen’s side, heading home Ian Harkes’ cross to the top right corner. Diego Fagundez equalized for the Revs, curling home a right-footed free kick to the top left corner. Brian Wright’s 48th-minute effort from close range proved to be the winner as last season’s runners-up held on. Besides Ortiz’s early header, D.C. United failed to record a single shot on goal in the match.

A crowd of 32,287, the second largest in U.S. Open Cup history, saw a thrilling scoreless draw at Nippert Stadium. The hero of the match was Cincinnati goalkeeper Mitch Hildebrandt. Who made ten saves on the night, robbing high profile attacking players like Nemanja Nikolic, Luis Solignac, and the rest of the Fire like it was nothing through a scoreless draw.

His heroics turned legendary in the penalty shootout, which probably shouldn’t have happened anyway. Cincinnati thought they had the winning goal towards the end of extra time, but a questionable offside call thwwarted the celebrations. Hildebrandt made sure that didn’t matter. He denied Nikolic, Arturo Alvarez, and Juninho in the shootout to send the home fans into an absolute frenzy.

FC Cincinnati will play Miami FC in the quarterfinals, ensuring a non-MLS team in the semis for the first time since 2011.

The New York Red Bulls bounced back from a Hudson River Derby loss with a penalty kick win over another local rival, defeating the Philadelphia Union, 5-3, in penalty kicks following a 1-1 draw.

Sacha Kljestan gave the Red Bulls the lead just before half time by capitalizing off a turnover and a nice feed from Bradley Wright-Phillips. But Roland Alberg cancelled that out in the 86th minute to force extra time and, eventually, a shotoout. Red Bulls backup keeper Ryan Meara played the savior in penalties. He stopped Fafa Picault for the only miss while the Red Bulls went a perfect five for five. He had a strong game overall, as well, kaing seven saves on the night as the Union pelted his goal with shot after shot.

The Red Bulls had been knocked out of the Open Cup by the Union in each of the last two seasons, so they finally got over this tricky hump. They will face the New England Revolution in the next round.

Sacramento Republic couldn’t replicate the feats of their lower league brethren in this nightcap, falling, 2-0, to the LA Galaxy. A pair of quick goals opened the second half and made sure LA Galaxy didn’t slip up the same way Atlanta and the Fire did. Ariel Lassiter hammered home a free kick in the 27th minute and Bradford Jamieson doubled the lead two minutes later. The Republic gave it a pretty good go, however. They took 15 shots with their limited possession, but only two of them made it on target and Jon Kempin was hardly tested.

The Galaxy will be happy with their young and rotated squad pulling out the win here. Their depth was shining through at a time when they could really use the help from the lower reaches of their roster.

Shea Salinas opened the scoring in the sixth minute thanks to an opportune deflection off a corner kick, but the Quakes would experience a slight hiccup before sealing the game in the second half. Francisco Narbon was shown a straight red card for the Sounders in the 35th minute, but they were able to equalize anyway. Aaron Kovar, who has scored in back to back Open Cup matches, got them on equal footing in the 48th minute with a beautiful curling free kick.

The Quakes would eventually get their winner in the 84th. Danny Hoeson weaved through the Sounders penalty area and beat Tyler Miller in goal to set up a California Clasico match in the quarterfinals.