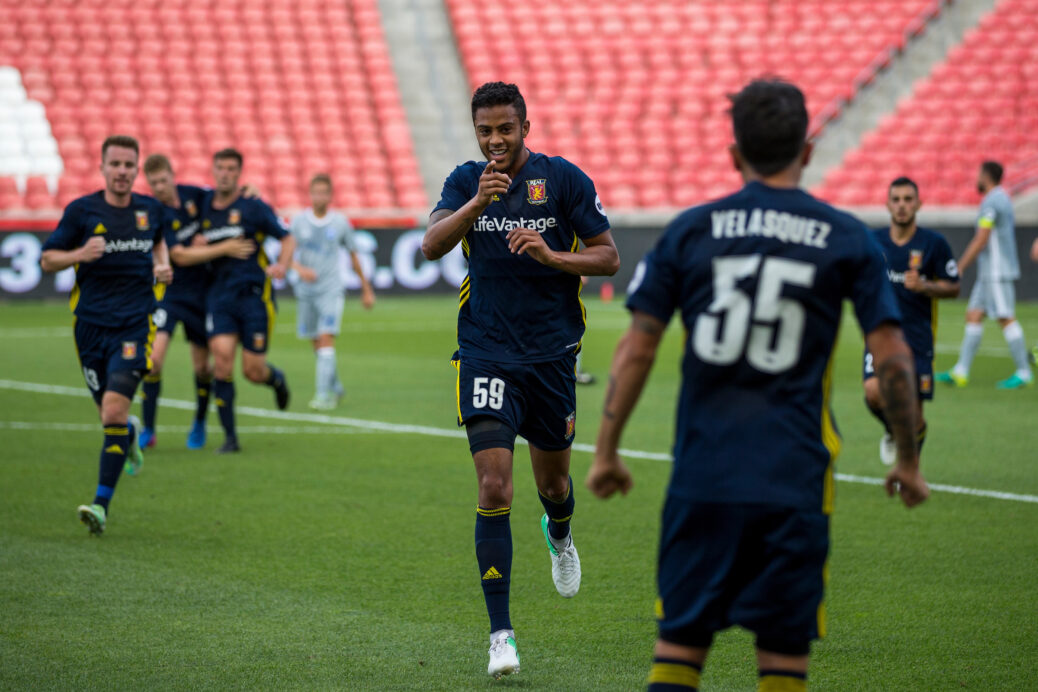 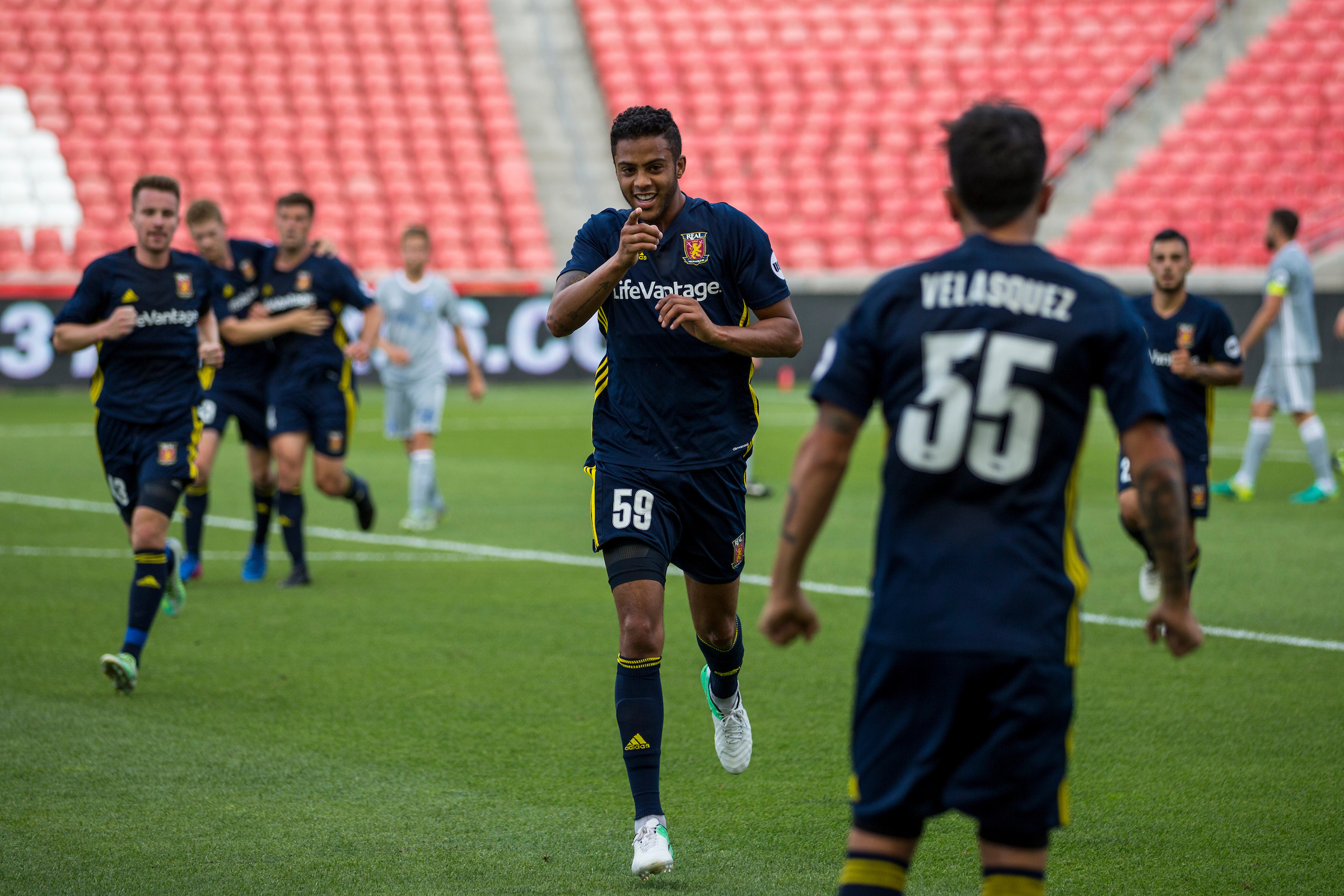 The top headline for the midweek fixtures has to be Real Monarchs SLC breaking the record for consecutive wins that was held by Orlando.

With their ninth straight win, the Monarchs both took over sole possession of the record but they also moved back into first place in the Western Conference which is becoming a two-horse race between them and San Antonio. It wasn’t easy as Reno put up a fight, but in what is becoming the norm, the Monarchs got the job done.

Bethlehem Steel are also streaking in the Eastern Conference as their third straight win has seen them rise to the fourth position in the table. Unbeaten in five, the Steel are using a strong defense and key goals from multiple contributors to fuel their rise to the top.

Andrew Brody opened the scoring for the Monarchs in the 22nd minute by deftly finishing off a counter attack to give them the 1-0 advantage. Soon after, 1860 FC equalized through Antoine Hoppenot who is slowly becoming their most dangerous attacker. Hoppenot got on the end of a long ball in the 32nd minute then made a Monarchs defender look silly before slotting it home. Right before the half, the Monarchs pulled ahead through a Taylor Peay header. Sebastian Vasquez whipped in a perfect corner that found Peay for his second assist of the match. Reno wouldn’t go down without a fight with their keeper and Hoppenot forcing key saves out of Lalo Fernandez but it ultimately wasn’t enough.

A Zach Mathers brace secured the win in a wild one for S2. Mathers got it going early, scoring his first in the 12th minute on an unassisted effort. Things settled down for a little but in the 32nd minute, Miguel Gonzalez was sent off for violent conduct due to an elbow to the face. The decision seemed like a harsh one as Gonzalez didn’t intentionally make contact but the decision was made. Following yet another foul, a penalty was awarded to S2 in the 35th minutes that Mathers slotted home to complete his brace. The Energy would pull one back in the second half through a 70th-minute goal from Hugh Alexander Dixon. Andy Craven would equalize from the spot in the 86th minute setting this one up for a wild finish. David Olsen ultimately scored the winner for S2 but the red card bug also bit them in stoppage time as Ray Sarri was sent off for his second yellow of the game.

Orlando’s slide continues as they are now winless in three while the Fury are climbing back into the playoff spaces with their third win in their last five matches. Steevan Dos Santos would open the scoring in the 43rd minute and that was all the Fury would need due to a strong defensive effort.

The Steel are rolling while the Islanders are… not. Two teams moving in different directions looked it during a weird match on City Island. The Steel should have been called the Union lite in this match that featured eight guys who have appeared for the Philadelphia Union in the previous two seasons. But it was the man with the armband, James Chambers, who converted an Adam Najem backheel into the game-winning goal. It wasn’t a game that Harrisburg played particularly badly in, they just weren’t ready for MLS competition on the night.

Swope Park Rangers are back in the top four in the West thanks to a timely victory over Colorado Springs. The Switchbacks got the early spoils with a goal in the 23rd minute from Eddy Prugh. Kevaughn Frater opened up Swope Park’s defense with a slaloming run before dishing to Prugh in the box. Swope Park would not be denied on the day, scoring twice in the second half to overcome the first half deficit. First, Liam Doyle scored his first professional goal on a corner kick to level the game at 1-1. Christian Duke on a loose ball just eight minutes later to win the match. Swope Park leapfrogs Colorado Springs in the table thanks to the victory.Sacramento Republic FC 6-2 Rio Grande Valley FC

Sacramento Republic FC demolished Rio Grande Valley on a scorching hot evening in front of their home crowd. Trevin Caesar led the way for Sacramento with three goals and an assist on the night. RGV found themselves down and out early after giving up three goals in the first half to Wilson Kneeshaw, Tyler Blackwood, and the aforementioned Caesar.  Dan Tricket-Smith would close out the scoring for Sacramento while RGV found two consolation goals from TJ Casner and Kyle Murphy. The win moves Sacramento into third place with a trip to LA Galaxy II on the horizon.Pittsburgh Riverhounds 2-0 Tampa Bay Rowdies

The Tampa Bay Rowdies continued their fall from grace after dropping a road result to Pittsburgh Riverhounds Thursday night. The Riverhounds desperately needed the win after going winless in their last five games. The Rowdies have not won a game in over a month, and panic alarms may be ringing. For the Riverhounds, the result salvaged the team for the short term and moved them back into playoff position. The goals in this one came from Chevaughn Walsh, and Romeo Parkes. Despite the loss, the Rowdies goalkeeper, Matt Pickens, had an outstanding game, but his team still fell short. The Rowdies will no doubt be returning to the drawing board.