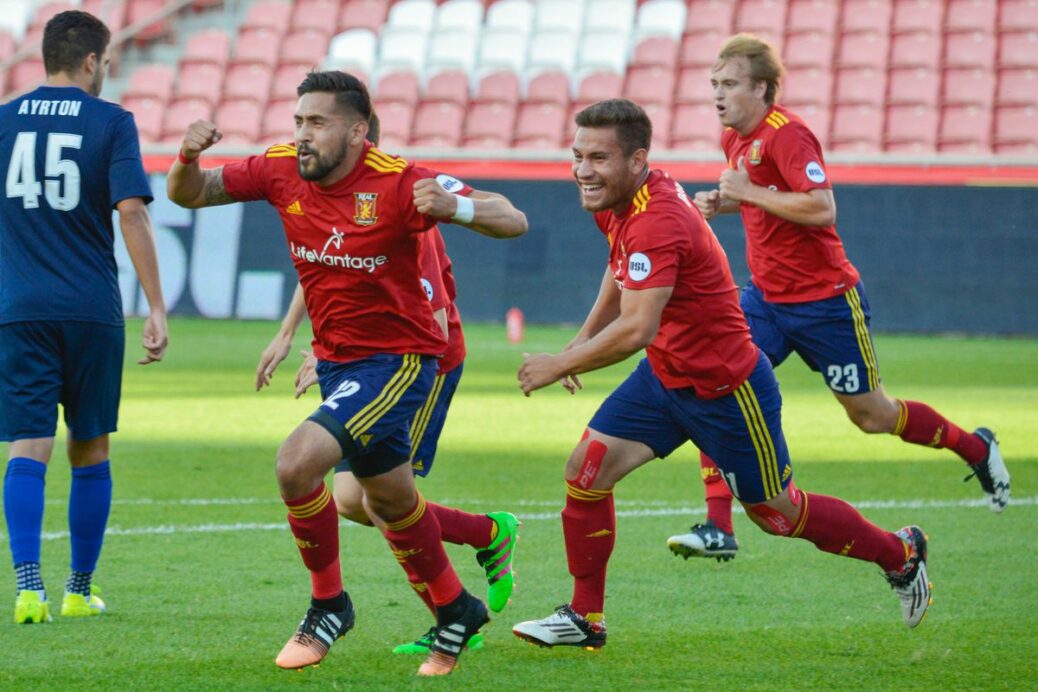 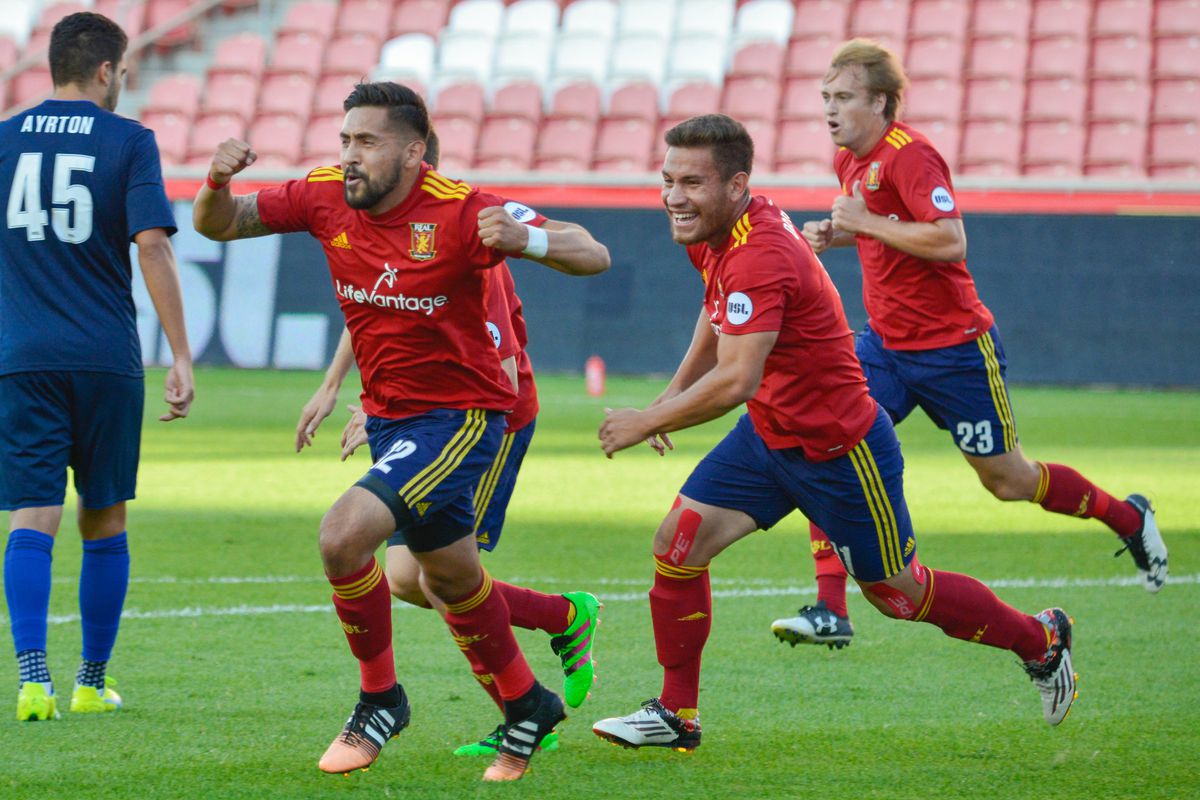 This week, the Western Conference got a new leader in Real Monarchs SLC.

The Monarchs are on an opposite path from their MLS counterparts Real Salt Lake. While the MLS team has struggled this season, the USL side is flourishing. The Monarchs sit at 10-1-0 on the season, are now on a seven-game winning streak, and went top of table, tied with unbeaten San Antonio FC at 9-0-3, with a game in hand.

Other notable streaks from the weekend include the Rochester Rhinos, with five-games unbeaten, San Antonio FC notching six consecutive shutouts, and the Tampa Bay Rowdies who are winless in their last three.

AJ Cochran scored the winner for Saint Louis FC in the 23rd minute to defeat Toronto FC II and break their five-game winless streak. Christian Volesky doubled the lead for Saint Louis early in the second half, beating the backline on a lofted pass from Jose Angulo and chipping past Mark Pais. TFCII remains winless since their season opener and have lost five of their last six matches.

Another team that looks to have shaken off its poor early season form is the Rochester Rhinos. Bradley Kamdem scored the games only goal to defeat FC Cincinnati, his first professional goal. The French midfielder replaced Rayane Boukemia in the first half after the latter suffered an injury.

Charleston Battery fans were treated to an eight-goal thriller Saturday against Louisville City FC. Charleston struck twice in the first half through Romario Williams, but Louisville halved the deficit just before the halftime whistle thanks to Oscar Jiminez’s deflected shot. Through 30 minutes in the second half, Charleston seemed to have secured the win leading 4-2. Maikel Chang (48th minute) and Ricky Garbanzo (73rd minute) tallied for the Battery, and George Davis IV scored what seemed like a consolation goal in the 60th minute. Brian Ownby and Forrest Lasso played the heroes for the visitors, as they struck twice in quick succession in the 79th and 82nd minutes.

Orlando City B came from behind on the road to defeat the Pittsburgh Riverhounds 2-1. Corey Hertzog opened the scoring with a left sided blast in the 30th minute. Hertzog has scored six goals so far this year, and looks on pace to best his tally of thirteen from 2016. Hadji Barry pounced on a loose ball to tie it up just before the half, and then set up the winner for Zach Ellis-Hayden in the 53rd minute. Pittsburgh is now winless in their last three.

The New York Red Bulls II got their first road win of the year over the struggling Richmond Kickers Saturday night. The Red Bulls II won their second straight game on the back of strong performances from Rafa Diaz and a poacher’s goal from Brandon Allen to see out the victory. Despite the Red Bulls II’s early struggles, the win propels them to third place in the east.

Colorado Springs Switchbacks left it late against the OKC Energy. Rony Argueta struck a laser from outside of the box that beat the keeper in the 93rd minute. Both teams met four days ago in the U.S. Open Cup, where the Energy defeated the Switchbacks 2-1 in their third round match. Colorado exacted their revenge with the late goal in a match that seemed destined to end scoreless.

Real Monarchs wasted no time scoring the lone goal of the match against Orange County SC, knocking one in during the first minute of the game. Chandler Hoffman took advantage of some lax defending by Orange County after an early set piece and tapped in his seventh goal of the season. Orange County had a golden opportunity to get back in the game, drawing a penalty in the waning moments of the first half. Monarch’s goalkeeper Connor Sparrow guessed right on the shot and offered up no rebound to the Orange County side. The win is the Monarch’s seventh straight, and they now lead the league table over San Antonio FC by virtue of total number of wins.

San Antonio FC slipped in the table after a difficult showing at home to Swope Park Rangers. Swope Park’s defense kept the home team from developing dangerous opportunities in front of goal. Both teams struggled finding target and left something to be desired from the fans. Swope Park failed to get proper revenge for their defeat to San Antonio last weekend, but will be happy with the point against one of the best teams in USL. Despite drawing, San Antonio held onto their sixth consecutive shutout.

Behind a strong day from Irvin Parra, the Sounders 2 have climbed into third place in the Western Conference. All three goals came in a second half barrage as Los Dos hung strong in the first half. In the 60th minute, Azriel Gonzales put a ball on a platter in front of the net that Parra was able to tap in for the opener. After a little chaos in the box, Parra would win possession and provide a pass for Ray Saari’s easy finish in the 70th minute. Four minutes later, Parra would bring the game to the final 3-0 scoreline by knocking home his second of the match and fifth goal of the season.

Sacramento Republic and the Toros may have battled to a scoreless draw, but it wasn’t for lack of chances. Jose Escalante had a great chance for the Toros in the 20th minute, but Evan Newton was there to make the point-blank save. Tyler Blackwood had a good chance for the hosts in the 40th minute, but Calle Brown read the shot the whole way for the Toros. The Republic almost won the match at the death through a header from Chris Christian, but Brown was there to preserve the points.

After scoring five last week, the Steel defense was able to slow down the Fury in a disappointing draw. Seku Conneh opened the scoring for the Steel with his third goal in four games in the 28th minute. Assisted by Ken Tribbet, Conneh’s strike from outside the box was a thing of beauty. The Steel almost doubled their lead in the 38th minute as Marcus Epps fired a curler, but Callum Irving was there to save it. In the 70th minute, the Fury finally found their equalizer as substitute Ryan Williams assisted Michael Salazar’s goal. It was an opportunity lost for the Steel who controlled possession on the day.

In a Cascadia clash, the Whitecaps 2 were able to move into the playoff spaces in the Western Conference. Marco Bustos put the Whitecaps 2 ahead in the 56th minute and that, combined with a strong performance in net from Spencer Richey, was enough to see this one out.

The Rowdies are now winless in their last three and scuffling after climbing into first place in the Eastern Conference. The Independence, on the other hand, are now unbeaten in three straight and are showing that no team can be counted out in the early parts of the season. Tampa went into the half sitting pretty after a Georgi Hristov goal, but fell asleep at the wheel. The Independence punished them by taking the lead on two quick-fire goals by Dennis Castillo in the 51st and 56th minutes. Luckily, Keith Savage secured a point for the Rowdies with an equalizer in the 83rd minute.