After disappointing effort against Panama, Acosta looking to seize next USMNT chance 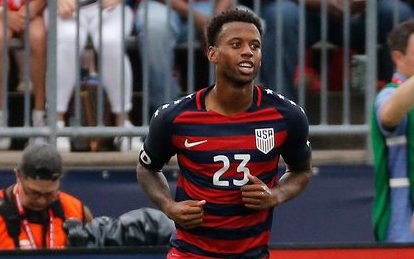 Kellyn Acosta understands the expectations he now faces. In just a matter of months, he’s grown from fringe U.S. Men’s National Team prospect to midfield regular. It’s a role that comes with pressure and weight, a status he must fight for each and every time he steps on the field for the USMNT.

After Saturday’s Gold Cup opener, Acosta felt he had let himself down. It was one of his more frustrating performances in a USMNT jersey, a lackluster effort in an eventual 1-1 draw with Panama. He took to Twitter to vent his frustration, jumping on social media to tell fans that he felt as disappointed as they did with both the individual and collective performance on Saturday.

As he hit send, there was relief and perspective. He quickly put the Panama performance and all that came with it behind him and looked ahead towards the final two group stage matches against Martinique and Nicaragua. Now, Acosta is looking for his next opportunity to prove himself worthy of the expectations he continues to put on himself and his team.

Crap performance..Has to be better.. Thanks for the support as always!

Lots of work to do… but better days ahead. Big game on Wednesday!

“I just think I had to gather some thoughts after the game,” Acosta said. “I was a little upset about how I played individually and, obviously, collectively as a team I thought we expected more out of ourselves and it wasn’t our best performance.  Sometimes that’s how the game goes. It’s a long tournament and we have two games to get back on track and get back to things we’re good at. That’s the beauty of it. We have two games to bounce back.

“I reviewed the game, gathered my thoughts,” he added. “I know individually, I just need to be a lot better to help out my teammates.”

When re-watching the film, Acosta saw where things went wrong on Saturday afternoon. Panama was a team that sat back and played well, pressing him and midfield partner Dax McCarty. It was a valuable lesson, Acosta said. The USMNT midfield duo sat back far too often as Panama midfielders Gabriel Gomez and Anibal Godoy had what Acosta called “a field day”.

It was too easy for Panama for large stretches. Acosta says the Los Canaleros midfield was just too physical and the USMNT didn’t adjust, causing a disconnect that wasn’t apparent during a star performance from Acosta and McCarty in the pre-tournament friendly against Ghana.

USMNT head coach Bruce Arena stressed that Acosta and McCarty need to work on getting closer to the midfield line to make the game more challenging for the opposition. The midfield battle was certainly lost on Saturday, and it was one of several units Arena expects to improve in the matches to come.

“I would say there was not a whole lot I would say I’m pleased with,” Arena said. “I thought our goalkeeping was pretty good. After that, I’m not jumping for joy at the moment, so we have to get a lot of things right.

“We didn’t play well,” he added, “and I have to accept that responsibility and we’ll get it better on Wednesday.”

Acosta has seemingly gotten better with each USMNT performance, save for Saturday’s. Against Ghana just one week prior, he scored his first senior national team goal, bending a free kick around the wall and in for the eventual game-winner.

Regardless of his most recent performance, Acosta has come far in just a matter of months. Since Arena’s appointment, Acosta has gone from infrequent call-up to starting midfielder in the Azteca against Mexico, a quick rise for even the most promising of prospects.

He wants that rise to continue in the weeks and months to come, especially with a World Cup just around the corner. Knowing that, consistency will be key and down performances like the Panama game will need to be infrequent.

“The more games I play, the more comfortable I feel,” Acosta said. Bruce has given me extra responsibilities here with the team and I’m excited with them. I take set pieces with my club team and I’m glad that’s translated to the national team. A lot of work needs to be done and I need to touch up on some things but I’m growing.

“I’m still learning each and every day and hopefully I can continue doing well and being more positive and more helpful to my teammates to contribute more often.”

It remains to be seen if he’ll contribute against Martinique or Nicaragua. Arena has promised rotation after playing in scorching conditions in Nashville to open the Gold Cup. Wednesday’s game in Tampa, Florida probably won’t be much cooler and Arena is expecting to shift his lineups throughout the next two matches.

Acosta, though, is ready for his next chance, whenever it comes, as both the midfielder and the USMNT look to continue to improve throughout the Gold Cup.

“We’re definitely pretty positive,” Acosta said. “We got a point against a tough Panamanian team. We have another chance to go out there tomorrow against Martinique. The guys are very positive about going out there and getting the result that we need.”