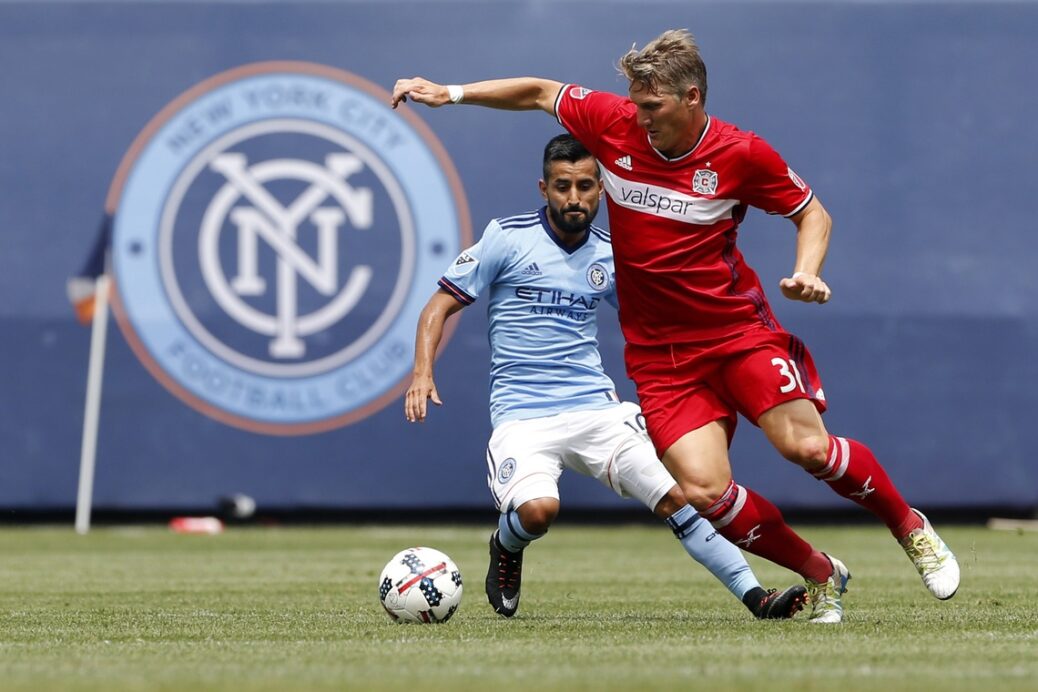 That winning mentality seemingly came with him as he moved to the Chicago Fire as the club reeled out a whopping 11-game unbeaten run to begin his MLS tenure. That run came to an end on Saturday against a 10-man New York City FC, and while the performance was far from satisfactory, Schweinsteiger sees some small positives in the Fire’s first setback since April.

Despite being up a man for virtually the entire match, the Fire were largely outplayed in a 2-1 loss to NYCFC. The 10-man hosts seemingly improved after going down a man, attacking as much if not more than a Fire team that looked truly beatable for the first time in quite some time.

For Schweinsteiger, the loss was a wake-up call, one which the team will heed as they march on through the second half of the season.

“We knew in advance that they have a team where everything, more or less, is working automatically on the pitch,” Schweinsteiger said. “So they have a good team. Of course when you play against 10 men, it sounds weird, but it’s not so easy and we didn’t do well. We were not playing today with the ability we usually do.

“When that happens then it’s not easy for us and we can lose games. So on one side, I don’t like to lose games but maybe it’s good to wake you up and be ready for the next match.”

Lessons are good, sure, but Fire boss Veljko Paunovic likes results even more. On Saturday, they didn’t get one, and the Fire boss largely looked inward to explain why.

Paunovic says that NYCFC was the clear winner because, on the day, they wanted it more. He described the game as an “opportunity that you cannot let go”, and the Fire did just that. The Fire just weren’t sharp on the day, and Paunovic felt that any changes he made on the day produced “very, very small improvements”.

The team started sluggish and, to their credit, the Fire had somewhat of an excuse. The match on Saturday was the club’s first since July 5 thanks to the quirky nature of Gold Cup scheduling while NYCFC was entering following a tough Wednesday draw against Toronto FC. There was obviously rust, Schweinsteiger said, and that kind of rust is normal, but not excusable.

Even the lone bright spot, a 25-yard stunner from second half substitute David Accam, was more of a moment of individual brilliance. The team, as a whole, didn’t display the correct attitude, Paunovic said, and NYCFC did more than enough to make them pay.

The good news for the Fire? The team remains just two points behind Toronto FC for the top spot in the Eastern Conference, and they have a game in hand. A Supporters’ Shield push is well within reach thanks to the club’s 11-game surge.

Paunovic is determined to not rest on past results, good or bad. He says the club isn’t looking at that win streak or any sort of statistics along the way. When they reach the playoffs or win a trophy, they’ll have the luxury of looking back but, for now, there are too many games to win before the team can worry about what’s come and gone.

The next test? A visit to Sporting KC as the Fire face another match against a fellow contender. Saturday’s opportunity may have been squandered, but the true test of character will come as the team looks to bounce back from their first setback in quite some time.

“At the end of the day our goal is to qualify for playoffs,” Schweinsteiger said, “and, from there, I think it’s down to who will be the champion in the league. There are a lot of good teams. I think when we are playing to our limit every player then we can be there with the other teams like New York, Atlanta, Toronto, and Kansas but first it’s important to qualify for the playoffs.”