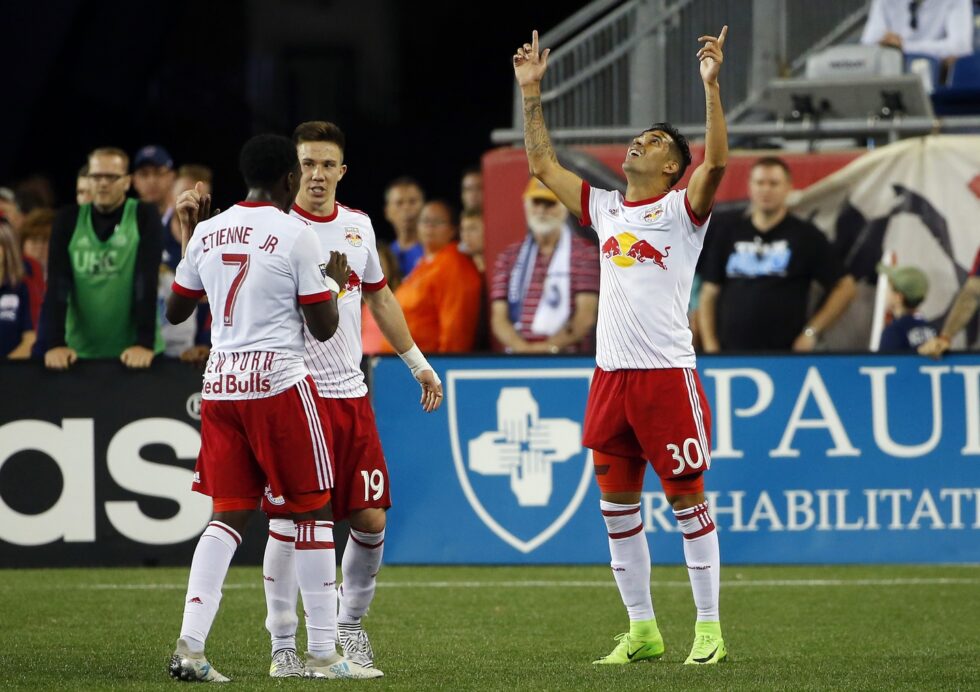 FOXBOROUGH – The New York Red Bulls rallied from a halftime deficit on the road against the New England Revolution on Wednesday night to pull away for a 3-2 victory after Felipe sent a perfectly-weighted through ball to Gonzalo Veron for the 90th-minute winner at Gillette Stadium.

The Revs’ Diego Fagundez started a flurry of scoring with a long run down the left sideline from midfield in the 21st minute.  He cut inside at the edge of the box and then found Teal Bunbury right of goal for a low, side-footed shot inside the far post on his second touch to put the hosts up 1-0.

The Revs didn’t have long to celebrate Bunbury’s first goal in 21 games, as the visitors quickly leveled two minutes later. Bradley Wright-Phillips sent a one-touch screamer off the crossbar and in from the edge of the box for his team-leading ninth goal to make it 1-1 in the 23rd minute.

Just two minutes later, the Revs retook the lead in the 26th minute when Fagundez beat four defenders and then sent in a quick shot that Red Bulls goalie Luis Robles parried away to the left post. Lee Nguyen was waiting there to chip it in over the diving Robles, who couldn’t recover quickly enough.

The Revolution led, 2-1, for the next half hour of play, but Gershon Koffie tripped up Sean Davis at the edge of the box and referee Silviu Petreso pointed to the spot in 55th minute. Revs goalie Cody Cropper guessed the wrong way as Daniel Royer finished into the right side of goal to tie it at 2-2. Veron’s late winner then sealed it, earning the Red Bulls three points.

Luis Robles made six saves in net to give the Red Bulls a chance to win the game. The Revs needed a win and played with that energy, managing 20 shots to the Red Bulls’ 12. Robles was unlucky on Nguyen’s goal after making a nice save on Fagundez’s preceding shot. He then held the Revolution scoreless over the final hour of what looked like it could have been a high-scoring affair.

The turning point was the silly penalty kick given up by Koffie as he left his leg out and Davis was shrewd enough to take him up on a foul in the box. The Revolution had been flying around the field, but Royer’s resulting goal seemed to turn the momentum in the Red Bulls’ favor.

No keeper in the league could have stopped Wright-Phillips’ goal, but Cropper had a subpar performance in goal, making just one save on four shots on goal. If he wants to solidify himself as a starting goalie in MLS, he has to come up with the big save in the big moment. Veron did well on his winner, but it was a low shot from 18 yards out. In other words, it was eminently savable.