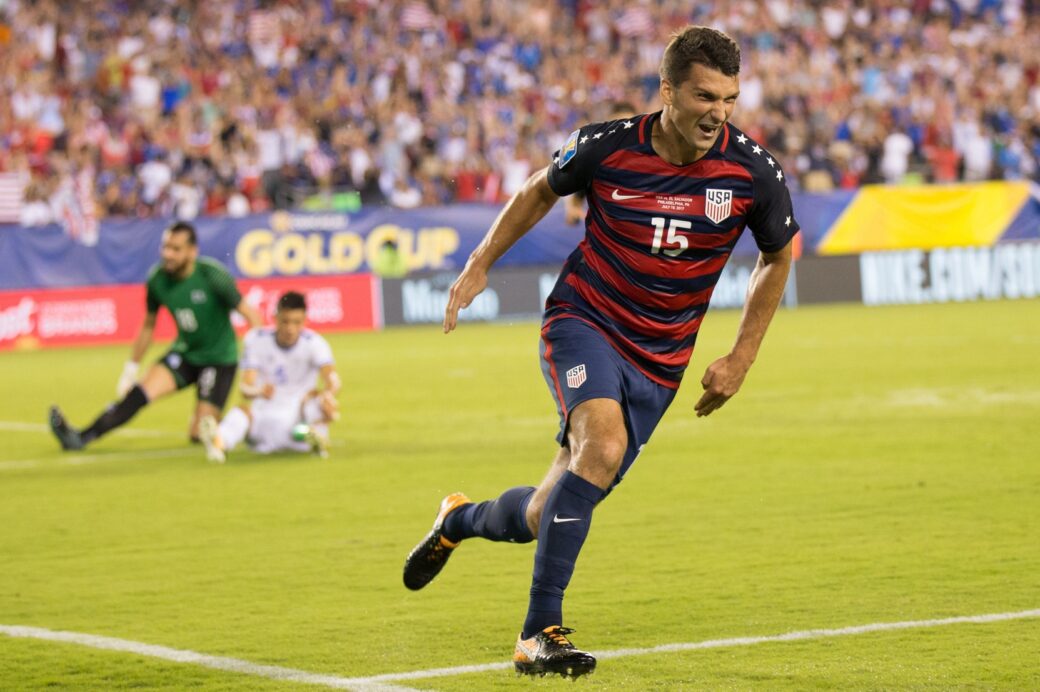 PHILADELPHIA – Eric Lichaj was determined not to sulk, even if he had every reason to drop his head and accept his struggles. He was in the midst of one of the worst performances imaginable, one where he almost single-handedly gave a goal away. He failed to prevent sequences that nearly led to several others. Quite frankly, he was in a self-imposed nightmare with thousands looking on.

With just moments before the halftime whistle, that nightmare suddenly turned into a dream with one swift shot, one low flick through the goalkeeper’s legs and into the back of the net. As he slid on the Lincoln Financial Field grass awaiting his teammates’ embrace, Lichaj turned what looked to be a career-defining setback into an improbable resurgence.

Lichaj scored the second of two USMNT goals on Wednesday night, helping lead the way in a 2-0 win over El Salvador in Wednesday’s Gold Cup quarterfinal. It was a stunning rise from a player that one of the worst on the field for the better part of the first 45 minutes.  The second 45, though? Generally calm, composed, cool, much like his finish to end the first half.

After years out in the cold and out of the USMNT picture, Lichaj both squandered and retrieved his USMNT chance all in one 90 minute period.

“I’ve realized that, especially the last two games that I’ve played, it’s never easy,” Lichaj said following Wednesday’s win. “Maybe I took that for granted for the first 30 minutes, but in my head, I thought I was ready. I’ll change something and I’ll look into that. I know we’ll have a video session tomorrow that I’m not going to look forward to because in that first 45, that play in the second half, that’s something I need to look at and get criticized about.

“I don’t look at the good stuff,” he added. “I remember the bad stuff I do in games because I always want to improve. I try not to make myself too comfortable.”

For the first 30 or so minutes, Lichaj certainly didn’t look comfortable. It all came to a head in a sequence that could have and certainly should have seen the USMNT down an early goal.

On the ball about 35 yards out, Lichaj mishit a pass towards Tim Howard, allowing El Salvador’s forward to dart in alone on goal. Lichaj had little time to think. The only thought? To run back as fast as he could to try and atone in any way he can.

He didn’t get there, but Howard did, kicking the shot out of the way. Lichaj admitted he owes the goalkeeper big time, and the moments that followed the save were trying.

Lichaj “needed” the goal, he admitted. In the aftermath of the mistake, he continued to make runs down the right and he kept noticing that the winger wasn’t checking him. With the half dwindling, he took the risk and darted down the middle of the field. Clint Dempsey held the ball and found him, and Lichaj did the rest.

As the ball rolled in, Lichaj ran and ran and ran until he finally felt his legs get heavy. He didn’t know what else to do so he slid, or fell, and awaited his teammates. After all but giving a goal away, Lichaj grabbed one back at the game’s vital moment.

It was a tale of two performances. On one hand, the inexcusable mistakes and blunders that keep players far away from the national team. On the other, the composure and maturity to settle down, get it together and not only score, but step up defensively as the going got tough.

“He hasn’t been with the national team for a number of years,” head coach Bruce Arena said of Lichaj. “He’s a good defender, no question about it. Still needs a little bit more experience at this level, but he fits in well with the team. That’s a position we need him. DeAndre Yedlin was injured for a fair amount last year. We didn’t have all of our games. It’s nice to know that Eric’s a player, perhaps, we can depend on, in that position.

“I’m not looking too far ahead,” Lichaj added. “It would be nice to be picked to make the World Cup team. That’s the ultimate goal, but the way I played in the first 45, Bruce will be saying, ‘We shouldn’t go with Eric probably’, and that’s what I’m thinking. I need to sort that out. That first 45 minutes, I know in my head, is not good enough, and I know I can play better than that.”

Lichaj has come a long way since his last real chance. Back in 2011, the fullback was a member of the U.S. team that lost, 4-2, to Mexico. He played a full 90 as the U.S. fell, and he’s rarely been recalled since. There were sporadic appearances in 2013 and one quick appearance in 2016 but, largely, Lichaj wasn’t a part of the USMNT.

That makes this opportunity mean so much more to the 28-year-old fullback. He wants and needs to get to a final scenario again. He wants and craves a second chance, at both a trophy and the national team.

He’s brought his family along for the ride, mostly because he isn’t sure when it will end. His two children have never seen America besides his parents’ home of Chicago as they’ve spent almost their entire life in England due to his club career. This run means a lot to Lichaj the player, but it’s also a chance for Lichaj the father to show his daughters the world.

So far, they’ve been to Cleveland before flying to Philadelphia for Wednesday’s match. They’ll head to Dallas for the upcoming semifinal against Costa Rica and, if Lichaj gets his way, they’ll get to see California and a Gold Cup final.

It would be quite a resurgence, quite a story, for a player that lived a career’s worth of ups and downs in 90 minutes on Wednesday night.

“I haven’t won anything in my career,” Lichaj said. “I’m 28. It would mean a lot to win, especially with my country. That would be something I would remember forever.”