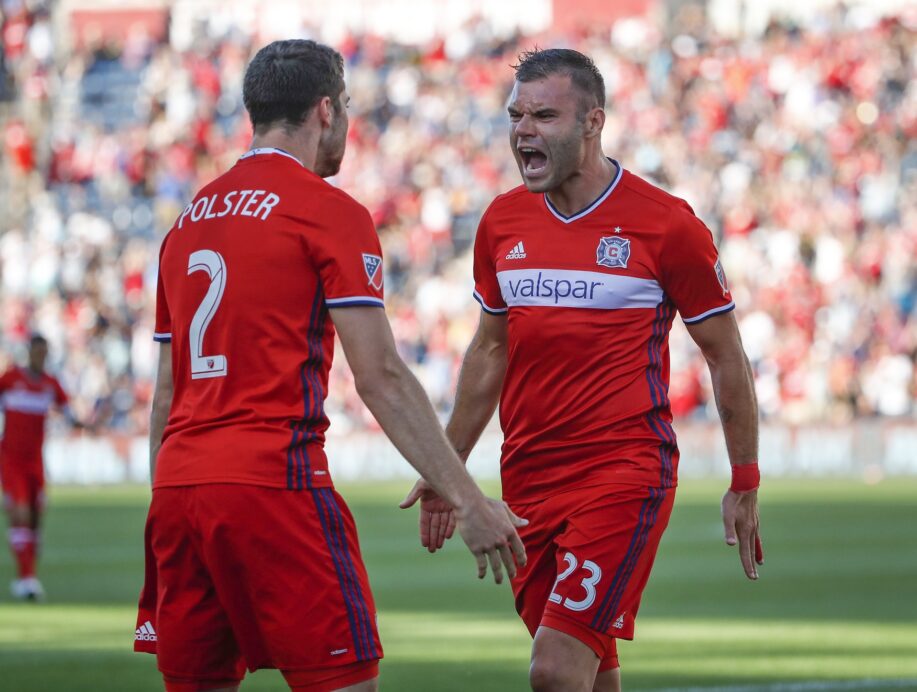 Behind a brace from their dangerman, the Chicago Fire blazed past the Vancouver Whitecaps to the tune of a 4-0 shutout. Stretching their home winning streak to eight straight, the Fire moved into first place in the Eastern Conference. The Fire aren’t just leading the East either, they’re atop the Supporters Shield race, and they’ve done this without key cogs David Accam and Dax McCarty, who were away on national team duty.

The Whitecaps looked to be the more dangerous team in the early going with Tim Parker sending a shot just wide and Christian Bolanos hitting the post in the sixth minute. But in the 15th minute, the Fire would strike. Following a cross-field switch from Brandon Vincent, Matt Polster would fire a cross into space for Nikolic to run onto. Nikolic would calmly slot it home for his 15th goal of the MLS campaign.

Three minutes later, Nikolic would strike again. After being played into space by Michael de Leeuw,  Nikolic shows his strength by holding off the Whitecaps defenders before firing a shot past David Ousted.

In the 42nd minute, the Fire would come knocking again with a great team goal. Luis Solignac switched the ball across the field to Polster who delivered a wicked cross into the box. On the end of that cross was Arturo Alvarez to volley it home for a 3-0 lead before halftime.

It wasn’t all smiles in the first half for the Fire as Bastian Schweinsteiger had to leave the game due to injury in the 43rd minute. He was replaced by Drew Conner in the midfield. The injury has been reported as right hip tightness and Schweinsteiger is listed as day to day for now.

The Whitecaps would sub on Freddy Montero and Nicolás Mezquida as they looked for answers but  Veljko Paunovic was one step ahead of Carl Robinson. Once Montero started to create chances for the Whitecaps, Paunovic subbed in Jonathan Campbell to switch to a 5-4-1 to close out the match.

All hope of the Whitecaps scoring in this one were gone once Matías Laba saw red in the 78th minute. He was sent off due to a studs up tackle on  Solignac, and the Fire would grab one more in the 84th minute as de Leeuw scored his first goal of the season off of a Nikolic assist.

Two goals and an assist are just enough for the MLS top scorer Nemanja Nikolic to narrowly edge out Matt Polster for Man of the Match. If it wasn’t for some outstanding saves from David Ousted, Nikolic could have had a hat-trick and then some.

De Leeuw’s goal in the 84th minute may not have meant much to the overall outcome of the match but to him and the team, it meant everything. He has been going through a drought this season so to get the monkey off of his back means a lot.

Matias Laba was already having a match to forget with a missed tackle in the box leading to a Fire goal earlier in the game but his red card putting his team down to 10 men puts him as the top guy on the Whitecaps that needs to put this game behind themselves.