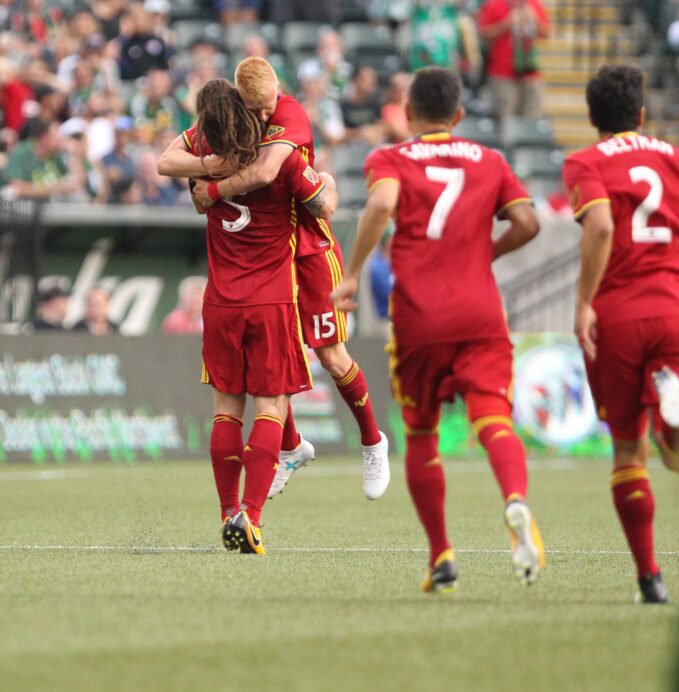 The goals and red cards were flowing on Wednesday night, and they mostly flowed in Real Salt Lake’s favor.

With five goals and three red cards, Real Salt Lake’s victory over the Portland Timbers was a highly-eventful, hugely entertaining return to MLS play. Unfortunately for the Timbers, and fortunately for RSL, most of the decisions and tallies went against the hosts.

Long-time RSL vet Kyle Beckerman wasted absolutely no time in getting the fireworks started, as his 10th minute wondergoal started things off for the visitors. Beckerman received a ball played back to him from the top-right of the Timbers’ box and unleashed a rocket into the top left corner to give RSL the early lead.

Things would only go downhill for the Timbers from that point on. Though they managed to prevent any further scoring, they did earn several yellow cards and allowed RSL to dictate the match for large periods of time. That would ultimately lead to things unraveling very rapidly in the second half.

It began with a penalty conceded by Dairon Asprilla. The Timbers winger tripped Jefferson Savarino in the box and referee Baldomero Toledo wasted no time in pointing to the spot. RSL winger Joao Plata stepped up to convert the take for his first goal of the match, giving the visitors a 2-0 lead.

Then things really hit the fan. Timbers halftime substitute Victor Arboleda only managed eight minutes on the field before being sent off for an elbow to the face of Plata early in the 53rd minute. It was just two minutes later that Fanendo Adi was sent off after inexcusably losing his cool after a slight touch from Beckerman, dropping the Timbers down to nine men for the rest of the match. Beckerman was also sent off for his actions during the scuffle, dropping RSL down to ten men.

That one time that Adi lost his mind. pic.twitter.com/qPSKARo58x

From there, Albert Rusnak and Joao Plata would extend RSL’s lead to 4-0, before a stoppage-time consolation goal from Jack Barmby pulled one back for the Timbers and left the score at the final 4-1 tally. On the night, a total of ten cards were handed out, three of them red, six against the Timbers and four against RSL.

Mike Petke’s side win their second straight, while scoring ten goals in that two-match span, and move just four points out of a playoff spot out West. They’ll take on Sporting Kansas City on Saturday night. The Timbers drop to fifth in the West and have now failed to win in their last six matches. They’ll take on the Vancouver Whitecaps this Sunday.

Joao Plata scored twice, including converting a second-half penalty, and drew a red card from Victor Arboleda shortly after the latter subbed in to the match.

Kyle Beckerman opened the scoring for Real Salt Lake with an absolute blast of a goal, driving the ball into the top left corner from way outside the box.

It’s difficult to let any Timbers players off the hook, but Fanendo Adi’s loss of control is inexcusable and took his team down to nine men on the night.