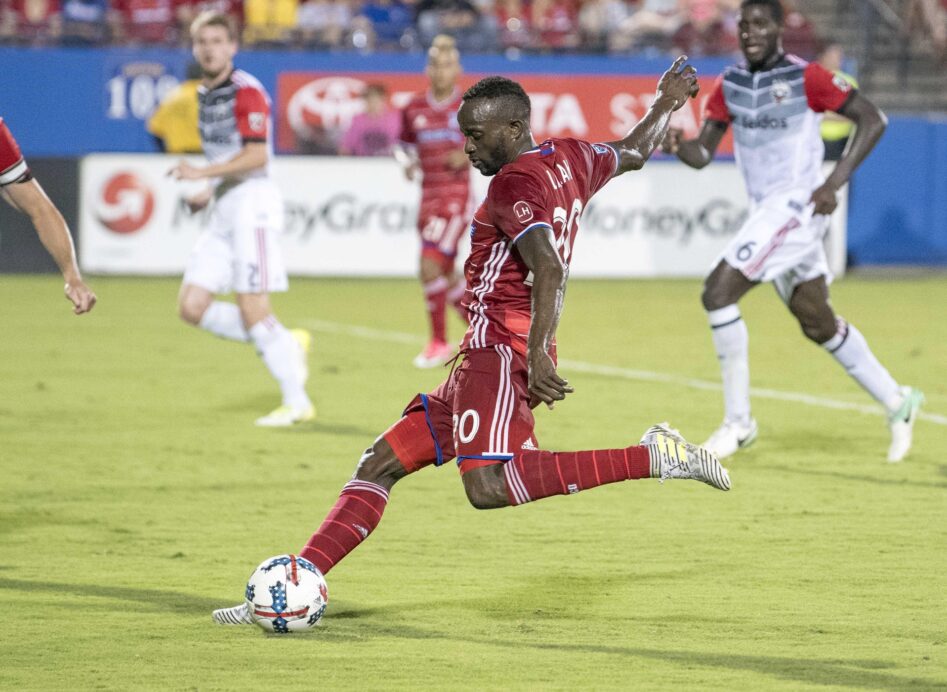 A 15-minute goal-scoring barrage was all FC Dallas needed to roll over D.C. United in Dallas on Tuesday evening.

Roland Lamah scored twice on either side of halftime to give FC Dallas the lead and to seal the victory for the home side.

Lamah’s first goal came in the second minute of stoppage time in the first half. Max Urruti’s failed shot attempt dribbled across the six-yard box. Lamah lay in wait at the back post, finishing calmly to put Dallas ahead 2-1. Dallas would eventually go on to win 4-2 over D.C. United

Lamah completed his brace in the 55th minute with a tap in on a Michael Barrios cross. Lamah, in his first season in MLS, has scored six goals this season including the brace against D.C.

D.C. held sway over most of the first half on the power of a goal from Ian Harkes. Harkes received the ball from Patrick Nyarko and fired a laser from outside of the box off the post, and in. Dallas struggled to start the game, registering a single shot on goal in the opening 30 minutes of play.

After conceding the goal, FC Dallas woke up. From the 30th minute on, the Hoops were firmly in control and created numerous chances. Eventually, Atiba Harris opened the scoring for Dallas on a corner in the 41st minute. Maxi Urruti scored two minutes into the second half putting the home side up by two on a bobbled shot by Travis Worra.

Deshorn Brown added a final consolation goal for the visitors in the 57th minute. The former Tampa Bay Rowdies forward gave D.C. fans some hope after an otherwise dismal game.

Both teams now head into the break in very different positions. FC Dallas (8-3-7) is tied atop the Western Conference standings. D.C. United (5-11-3) is languishing at the bottom of the Eastern Conference table.

Roland Lamah earned man of the match honors after scoring the brace. The 29-year-old midfielder is having an excellent first season in MLS and continues to put in memorable performances. On a side with plenty of difference makers, Lamah stood out.

Max Urruti’s goal minutes into the second half, complete with Travis Worra’s blunder, sealed D.C. United’s fate. Dallas started the half just as they had ended it and put the game to bed early.

Travis Worra had a rough night by all accounts. Against a talented attacking side, it might be a bit harsh to call him out for his performance, but he seemed a step off for most of the night. The above mentioned blunder on Max Urruti’s goal is the stuff of nightmares. Filling in for Bill Hamid, Worra failed to seize the moment.