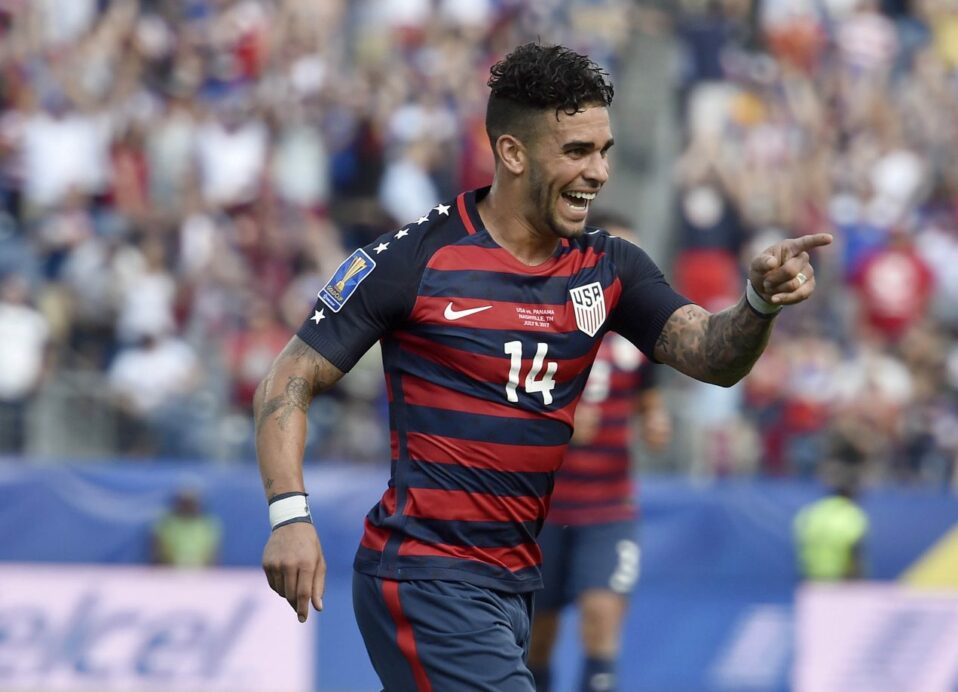 Kelyn Rowe and Dom Dwyer are two of the U.S. Men’s National Team’s newest faces. They’re just a week removed from their international debuts and, on Saturday, the duo returned to the USMNT lineup for the team’s Gold Cup opener against Panama.

Despite their inexperience, Rowe and Dwyer shined on Saturday and were two of the few USMNT players to actually impress in what ended as a 1-1 draw in Nashville.

In a match headlined by a lack of flow or energy, the two seized the opportunity to impress in just their second USMNT matches. Rowe provided the assist on the USMNT’s lone goal while Dwyer provided the finish, sparking the U.S. to a point in a match that saw them outplayed for large stretches.

The sequence from Rowe was brilliant. After receiving the ball on the left side, Rowe flicked the ball up and over his defender before touching it past him and towards the endline. The ensuing cross skipped across the box and right to Dywer, who was in the perfect position for the finish.

It wasn’t Rowe’s only bright spot. The New England Revolution build on a solid attacking outing in his USMNT debut against Ghana with good performance with the ball at his feet. When all was said and done, Rowe fired three shots, two of which were on target while serving as one of the primary catalysts for the USMNT attack. There were only a few USMNT players capable of igniting attack in a match that saw Panama bunker, but Rowe was probably the most consistent.

Dwyer, meanwhile, did what he does best: pop up at the right moment. The goal was a perfect highlight of what you need a striker to be doing in a tight match. He hung off his defender’s back shoulder and drifted at just the right time. He found that yard of space that he needed to score and his finish was pinpoint.

With that said, the performance was far from perfect. The shot was the only one Dwyer put on target throughout 90 minutes. For much of the match, the Sporting KC forward was kept quiet and he rarely popped up in dangerous spots. Part of that blame falls on his teammates and the general lack of decisiveness from the group around him, but Dwyer was certainly quieter than he was in his USMNT debut.

Rowe wasn’t flawless either. His role in the goal conceded was massive as he dove in for a reckless tackle near the endline. He whiffed as part of one of several USMNT breakdowns on the sequence. Rowe wasn’t brought into this team for his defensive work, but the USMNT can’t afford mistakes and mishaps like Rowe’s wayward tackle attempt.

That said, the performances were largely positive from the two newcomers. In a match featuring several of the team’s most senior veterans, two fresh faces shined and helped lift the USMNT to a tournament-opening draw.