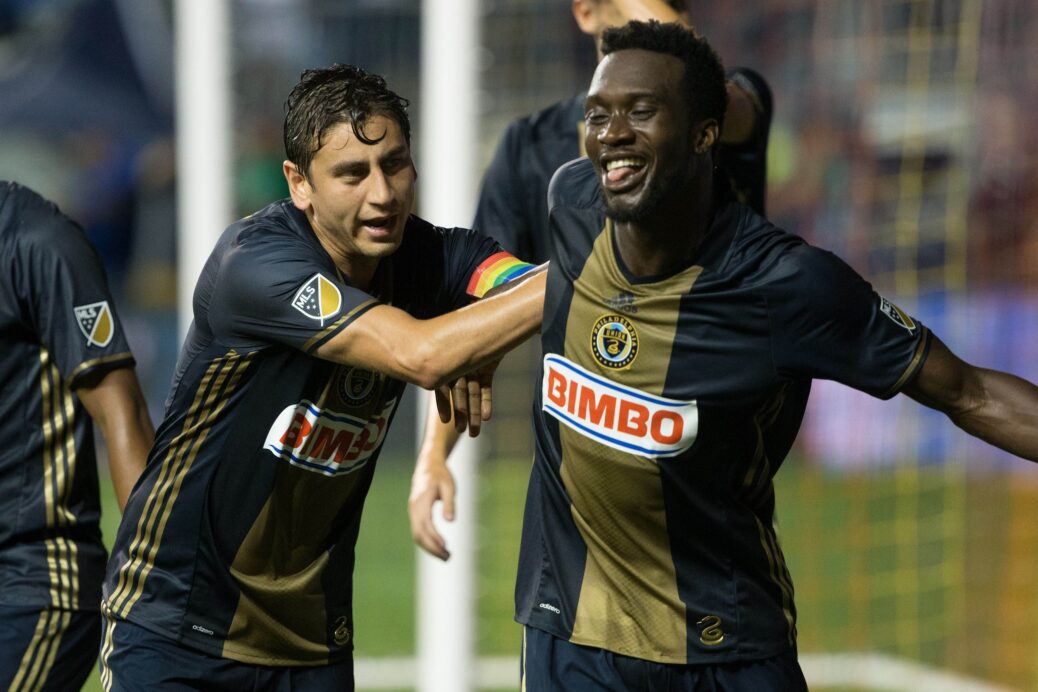 The Philadelphia Union bounced back nicely from a defeat in Columbus on Saturday to defeat the visiting Crew, 3-0, on Wednesday at Talen Energy Stadium.

Jim Curtin’s side used goals from Ilsinho, C.J. Sapong, and Marcus Epps to snap a three-game winless run as the Crew saw two defenders sent off.

Marcus Epps had the first true effort for either side, seeing his 17th minute effort skim the right post.  However the breakthrough came three minutes later for the hosts as Ilsinho blasted home Sapong’s bicycle assist in from close range.  The Crew failed to clear their box and it let them down as the Union pounced on the opportunity.

The Crew’s best first half chance came in the 26th minute as Ola Kamara was kept out by the crossbar from close range. Kekuta Manneh’s outstanding run into the box prior to that saw the midfielder’s effort blocked by Jack Elliott.

The Union looked likely to double their lead to 2-0 after Jonathan Mensah bundled Sapong over on a breakaway after 35 minutes. Zack Steffen pushed Roland Alberg’s ensuing penalty kick off the crossbar to keep the 10-men Crew in the match.  Sapong was vocal to the Union bench after not taking that penalty kick. Sapong was also sitting one goal away from his first double digit goal season in his MLS career.

Sapong’s nicely taken half volley after 57 minutes had Steffen beat but the right post came to the keeper’s rescue to keep it only 1-0.  The striker got the last laugh after 66 minutes, scoring his 10th leave goal of the season to double the Union’s advantage.

Frustration boiled over for the Crew a second time, as defender Lalas Abubakar saw a second yellow after a retaliation on Ilsinho after 76 minutes. The dismissal reduced Gregg Berhalter’s men down to nine men on the evening. Epps stamped the final score at 3-0, scoring his first MLS goal in the 80th minute.

At the final whistle, the Union earned an important three points in their push towards the Eastern Conference playoff places.  The Union (7-5-9) travel to the New England Revolution on Saturday looking to make it two wins in four days.  The Crew (10-1-11) see a two match winning run snapped with the loss. They travel to Real Salt Lake, looking to right the ship after and dismal performance on Wednesday.

C.J. Sapong earned Man of the Match honors after scoring the Union’s second goal and also being a nuisance to the Crew backline all night long. Sapong won a penalty and easily could have had  a hat trick with the amount of chances he had. The forward also added an assist on his side’s third goal.

Sapong’s goal sealed the three points for the Union who were in cruise mode following that. It sealed the victory for Philadelphia and capped a miserable night for Columbus.

Crew defender Jonathan Mensah damaged his side’s chances by allowing not only a PK but being sent off. The visitors failed to get much going after going down to 10 men and the defender’s clumsiness  is a main reason for that. Overall, 2017 has not been a great season for the Ghanaian centerback.