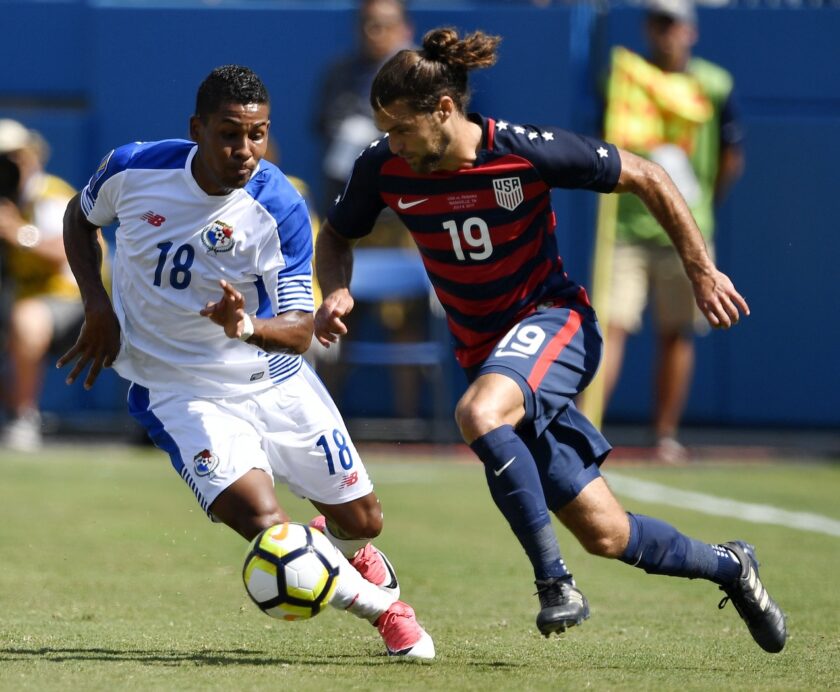 Well, that wasn’t pretty. Saturday’s match between the U.S. Men’s National Team and Panama was far from a modern classic. It didn’t capture the hearts of those who watched and it certainly didn’t offer much in the way of beautiful soccer.

What it did offer, though, was a look at where this USMNT group stands, and the picture isn’t quite as rosy as it was following the team’s win over Ghana a week ago. That’s not to say there weren’t standout moments or performances but, by and large, Saturday’s 1-1 draw with Panama was a humbling one.

Star goalkeeping helped protect several defensive lapses while Dom Dwyer’s scoring touch continued to serve as the biggest story of camp so far. Saturday’s match was just another mere glimpse into several key storylines, but it was a revealing one.

Here’s a look at several of the big takeaways from Saturday:

Let’s get it out of the way. Dom Dwyer didn’t have his best game. He was relatively absent in the USMNT attack, for a variety of reasons. He had few legitimate chances and was generally quiet through 90 minutes.

But he got his one chance, and he buried it, making his case even stronger going forward.

Dwyer’s shot early in the second half proved the lone USMNT goal, and it also proved Dwyer’s lone opportunity. In a hot, grind-em-out, mess of a game, Dwyer seized his chance and tucked it into the lower corner. It was a striker’s goal, one that showed a mix of positional awareness with his idea to drop back and ruthless finishing as his shot pinpointed the bottom corner.

Through two games, Dwyer now has as many goals, signaling as solid a start to his USMNT career as anyone could have hoped. There are still so many variables in play between now and fall qualifiers, but it’s hard to say Dwyer hasn’t at least earned a discussion with regards to a place with the real national team.

Until then, though, Arena will have a hard time getting Dwyer out of the USMNT lineup through the Gold Cup. If he keeps scoring, Arena will have no choice but to ride Dwyer ahead of the talented young forwards on the U.S. roster.

Joe Corona wasn’t the only USMNT player to struggle. Virtually everyone made some sort of mistake on the day and very few made any real positive impact on the match. However, his issues were among the more jarring, especially given how good he was against Ghana.

To say Corona couldn’t find his rhythm is an understatement. He rarely got on the ball and, when he did, he did nothing with it. It was a far cry from the decisive, free-flowing performance against the Black Stars, one which seemingly reignited his national team career.

He needed to do more, even if he wasn’t the only one. Without Corona clicking, you could see how disjointed the USMNT attack was. With McCarty and Acosta also struggling, the U.S. had little chance.

With players like Paul Arriola and Juan Agudelo out of the starting lineup, the U.S. has other options for creativity, but one would expect Corona to get another chance to show that he can be more like the Ghana Corona than the Panama Corona.

Matt Besler and Omar Gonzalez did well enough at centerback. They were okay, nothing special. The fullbacks on either side of them, though, left a lot to be desired.

Graham Zusi looked like the defender that is still very much adjusting to the fullback position on Saturday. He routinely failed to step up in dangerous situations, giving Panama attackers space to operate and, at times, fire on goal. It’s a lesson that will be learned with experience at the position, growing pains for a player still adjusting to playing in defense.

Jorge Villafana has no such excuse like inexperience or unfamiliarity. In the attack, he remains solid but his one-on-one defending remains a legitimate weakness. Against teams like Martinique and Nicaragua, sure, you can get away with being a little bit more attacking. But a team like Panama? Nope.

With Eric Lichaj on the bench, Arena has a ready-made replacement on either side. It remains to be seen when and if he’ll use it, but don’t be surprised to see Lichaj in the mix for the next two matches.

No matter where you stand on the USMNT goalkeeping debate, you have to give props to Brad Guzan.

It’s rarely a good look when your goalkeeper is as busy as Guzan was on Saturday. He was almost certainly the USMNT’s best player on the field, fortunately for a U.S. team that put together a number of impressively bad defensive breakdowns on the day.

Guzan didn’t have to make a million saves a la Tim Howard against Belgium. When all was said and done, he had five stops. But none of those five were softballs. Each was a legitimate chance that could have, and maybe should have, ended up in the back of the goal.

Even on the goal he did give up, Guzan made the initial save and any semblance of awareness in the USMNT box would have seen the ball cleared away. Guzan stepped up a big way on Saturday, and the U.S. has a point because of it.

If you’re near a panic button, step back. There’s no reason to be upset, at least not yet.

Panama was always going to be the biggest test. I knew it, you knew it and the USMNT knew it. A draw, while disappointing given the style of soccer on display, isn’t the worst result. It was a whatever result from a whatever performance. You move on.

Bruce Arena isn’t the type to panic over matches like this, and he isn’t the type to blow things up over one or two setbacks. No one is going to be glued to the bench and no one will be viewed as a savior. It’s business as usual for the USMNT, even if that business was a bit ugly on Saturday in Nashville.

The scenario ahead? The U.S. needs goals and lots of them. It’ll almost certainly be a race with Panama to see who can score more against minnows Nicaragua and Martinique. Barring something ridiculous, both the U.S. and Panama will be fine.

Still, there’s a difference between “fine” and “championship fine”. Going forward the U.S. will need to be better, and they probably will be, as they still have two games to fine-tune before the real matches begin.