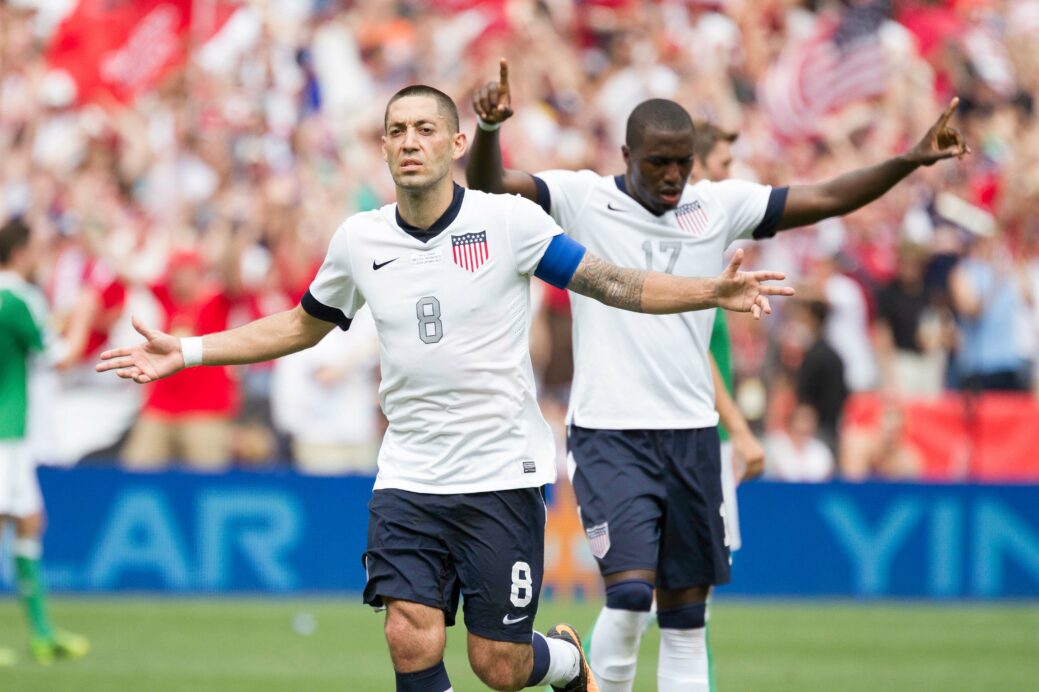 Clint Dempsey remains just one goal away from the USMNT goalscoring record. Jozy Altidore has been his partner many times throughout the forward’s journey to the top of the USMNT charts, and the two are set to reunite again throughout the Gold Cup’s knockout rounds.

Altidore says his real first memory of playing alongside Dempsey came nearly a decade ago in a game against Mexico. The TFC forward remembers stealing a goal from his longtime strike-partner in that match back in 2008. It was a match that Altidore remembers fondly, not just because of his goal but because of Dempsey’s “terrible” haircut at the time.

Dempsey, in response, wasn’t mad, Altidore says, but rather happy to see his teammate fire a big goal.

“We’re different. We obviously the same in that we both like to score goals but, in terms of our game, we’re both totally different players,” Altidore said. “I think, in that regard, it meshes perfectly. I’ve been lucky enough to play with some guys, whether it’s him or (Sebastian) Giovinco, who are just totally opposite and we click from day one. It’s not something I want to look too much into because I don’t want it to change, but I’m happy we’re still able to play and work together and have success.

“I think it’s a testament to both of us as pros to be able to, a decade in, still be with the national team and still playing in important games,” Altidore added. “His ability to score goals and my ability to help the team and score goals, I think, in a lot of ways show we’ve been important pieces for this national team. We just have to keep doing the job, man. There’s no time to reflect or pat yourself on the back. There’s a lot of work and a lot more still to come.”

BRADLEY FULL OF PRAISE FOR ACOSTA

Michael Bradley’s partnership with Kellyn Acosta is still a work in progress. The young FC Dallas midfielder is still acclimating to the international game while refining his game as both an attacker and defender.

Acosta’s recent efforts have been up and down. He rapidly jumped to the top of the midfield depth chart with several standout efforts, including one against Mexico, but his recent performances in the Gold Cup have been much less impressive.

Bradley says that’s all a part of the game and that Acosta is well on his way to learning the lessons needed to succeed. For young players, Bradley says, it’s about learning what works and making sure to turn that idea into consistency, a trait he already sees in Acosta.

“Obviously there are moments early on when you’re still getting your feet wet with the whole thing where it’s not always smooth sailing,” Bradley said, “and ultimately what separates all of these guys from the ones, what separates guys is the mentality. Guys who understand that in tough moments, difficult moments, your strength, your belief in who you are, your determination to continue to work and get better, that’s what ultimately makes a difference.

“Kellyn is a guy who really has that and I think he wants to work, wants to get better, he listens. He wants to push himself. You can see what it means  to him to be in this group and to take a bigger and bigger role. Bruce and the staff have done a really good job of giving him confidence  and making sure he understands how good we all think he is and making sure, not just for him, but any of us, that there’s moments along the way where it’s not as perfect as we’d like but it’s about continuing to push and push, and I think he’s done a really good job of that.”

CORONA STEPPING UP AHEAD OF BIG GAME AGAINST EL SALVADOR

Joe Corona has been out of the national team picture for quite awhile, but Bruce Arena is hoping the Tijuana playmaker can become a more regular fixture going forward.

Wednesday’s match will no doubt be a special one for Corona if he is selected to play. The midfielder’s mother is from El Salvador, meaning Corona was eligible to represent the country on the international level. He scored a goal against his mother’s homeland back in 2012 Olympic qualifying just months before his USMNT debut.

Prior to his goal against Nicaragua, Corona hadn’t scored for the USMNT since a July 2013 goal against, you guessed it, El Salvador. His recent efforts have impressed Arena, who is expecting more of the midfielder after several years away from the USMNT.

“He’s done a good job,” Arena said. “We’ve played him a couple of different ways and he scored a big goal the other day. He’s been solid. It’s my first time seeing Joe in person so it’s been good working with him for the last three or four weeks. Hopefully he continues to do well with his club team and can continue to be a part of our program.”