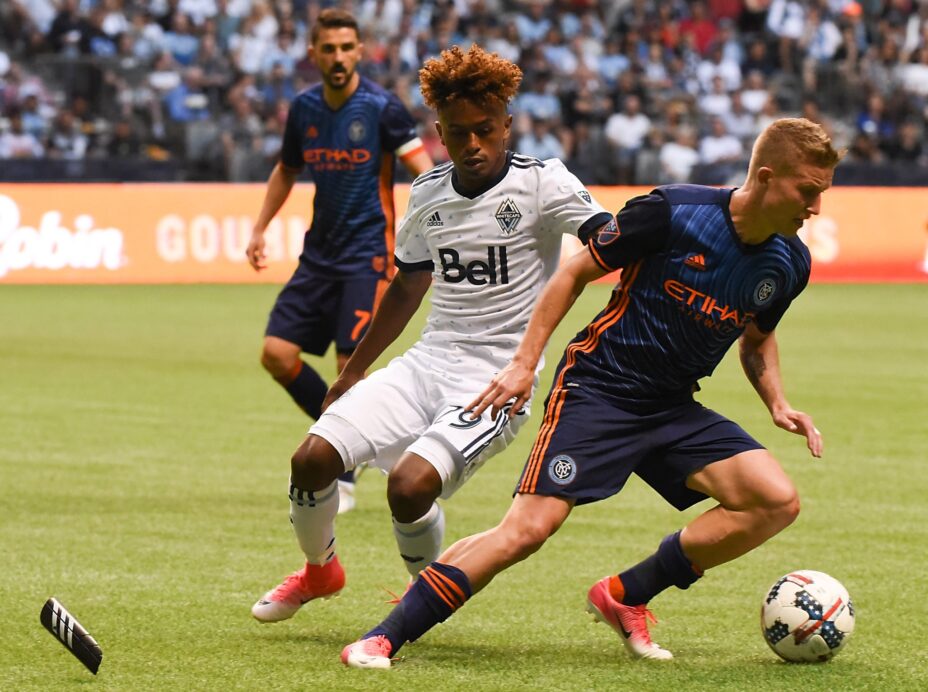 Yordy Reyna’s introduction to the Vancouver Whitecaps faithful was a memorable one.

The 23-year-old forward made his presence known with an 88th minute winner, snapping New York City FC’s four-game win streak with a 3-2 Whitecaps win. Despite falling behind just before halftime, and registering only one shot on goal in the first half, the Whitecaps came from behind against New York City FC to win on the power of second half goals from Jordan Harvey and Jordy Reyna.

Harvey leveled the score in the 54th minute after Christian Bolanos sent a cross to the back post. Harvey stormed forward to latch onto the cross and volleyed past Eyrik Johansen.

The Whitecaps continued to press as the game went on, and found a number of good chances to take the lead. Just when it seemed like luck was against them, Yordy Reyna found himself open in the box. Jakob Nerwinski’s cross found Reyna’s head, and the forward easily finished.

NYCFC’s first half was a mixture of good and bad luck. RJ Allen got caught in possession as Brek Shea closed the right back down. Shea sent a looping pass forward to Fredy Montero. Montero slotted the ball to the far post and opened the scoring in the third minute.

Montero’s goal was the lone shot of the half for the Whitecaps, and New York City FC took control of the game. After a number of good opportunities went begging, Allen found himself on the side of good fortune, latching onto an Andrea Pirlo corner, and sending it back towards David Ousted. Ousted failed to make a play on the loose ball, and Maxime Chanot tapped into the open net in the 34th minute.

After failing to get a penalty called when Andrea Pirlo was fouled in the box, NYCFC would get their penalty just before halftime. Tommy McNamara took a hand to the face from Kendall Waston and David Villa stepped up to the spot and scored his 53rd MLS goal.

The Whitecaps will be glad to take three points after going winless in their last three games. The win also sees the Whitecaps move back above the red line and into the final playoff spot in the West. With games in hand on many teams in the west, the Whitecaps can use the victory to kick start the second half of their season.

Jordy Reyna’s late winner on his debut was enough to earn him the accolades.

The man of the match, Jordy Reyna, provided the moment of the match with an impressive header to win the match for the home side.

RJ Allen helped set up NYCFC’s goal, but his defensive errors cost his team dearly on the road.