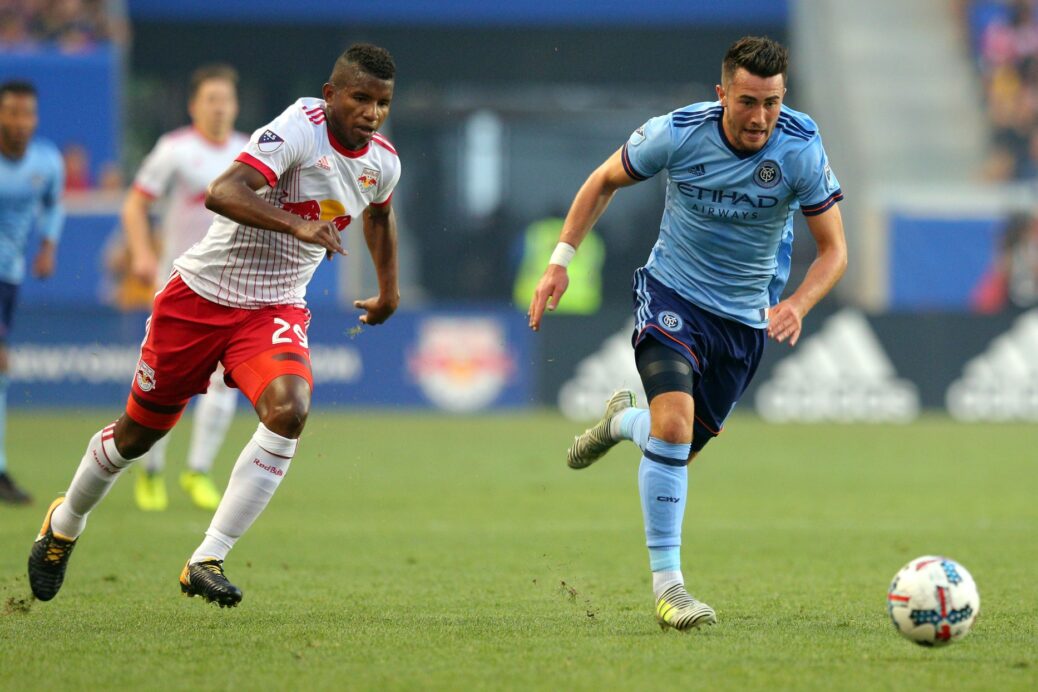 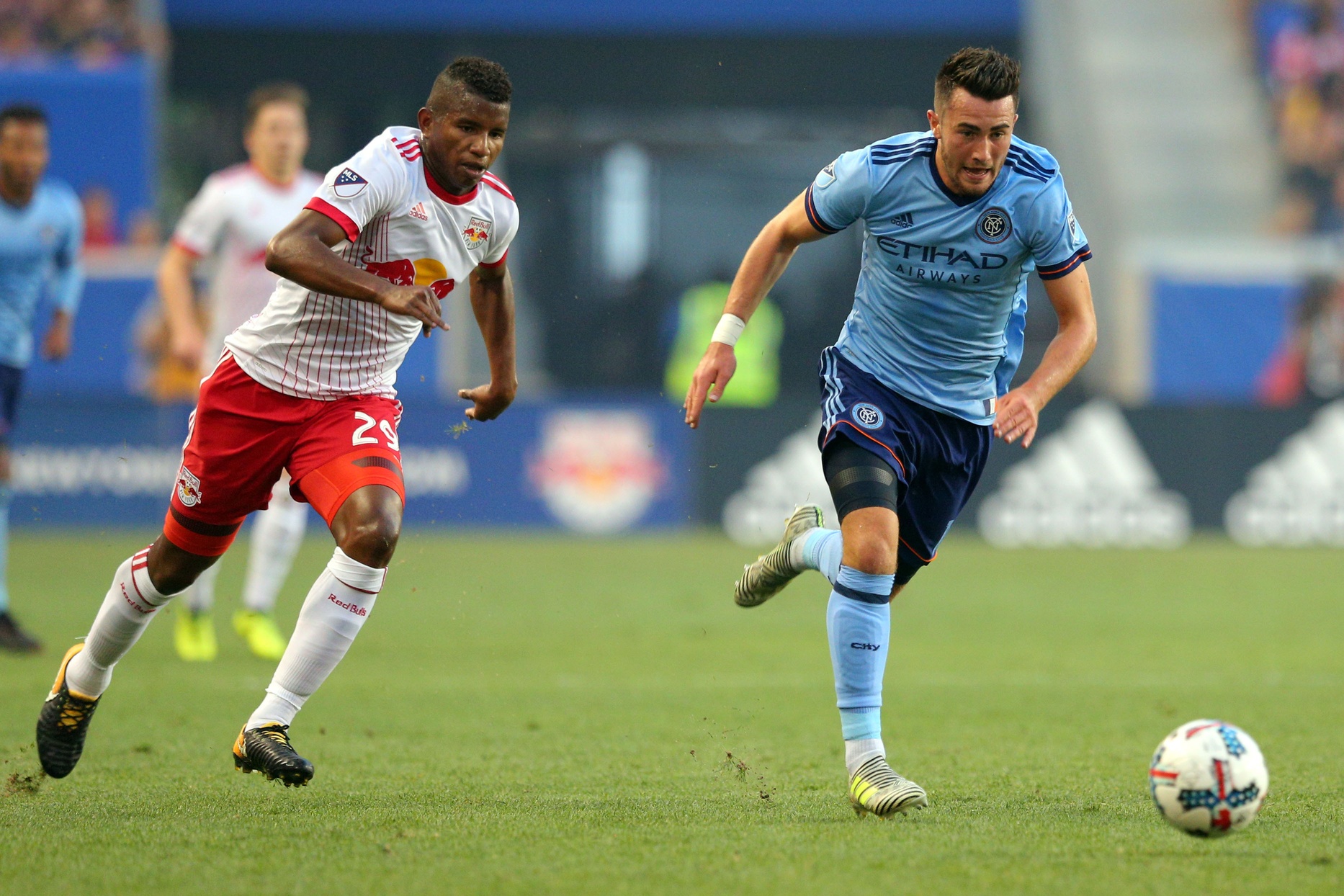 The New York Red Bulls may want to hang their head’s after this weekend’s draw to New York City FC. The truth, though, is that the 1-1 draw between the teams represents a critical shift in the Hudson River Derby that will make it a compelling match for years to come.

Jesse Marsch and Patrick Vieira are proving to be worthy adversaries that are dissecting each other and each other’s team to great detail, planning their every move. Not only has the rivalry evolved over the course of its existence, but it has evolved within this season tactically in unexpected and enjoyable ways.

Here’s what I noticed:

NYCFC came into the match with a very specific game plan. Knowing they would be without Yangel Herrera, City chose to setup very deep, allowing the Red Bulls all of the time and space they wanted over two-thirds of the field. With numbers behind the ball, the plan was for NYCFC to only look for counter-attacking opportunities as the main mode of attack.

View the heatmap below:

In it, you can see exactly where NYCFC concentrated their efforts. They formed a ‘U’-shaped grouping to force the Red Bulls to play more narrowly. By forcing the play into the center of the field, NYCFC hoped to let Alexander Ring break up the attacks wherever possible.

Ring keeps the Red Bulls from finding any dangerous opportunities, then helps spring the counter attack down the other end. It was a classic approach for City in the Hudson River Derby, but it wasn’t the only plan on display.

NYCFC picked their opportunities to step forward into the attack very carefully. In almost all instances, those opportunities came after a stoppage of some kind in the play. Following those stoppages, NYCFC pushed numbers forward for the next 2-5 minutes before dropping back down into their defensive shell.

NYCFC had eight shots in the match, there were stoppages in play before each opportunity that match the pattern described above. Let’s take a look at the only two shots NYCFC had in the first half.

Take a look at these passing maps before and after the stoppages described above. You can see NYCFC sitting very deep up until the stoppage in play, and then pushing forward with numbers looking for a quick strike before retreating back to their defensive formation. 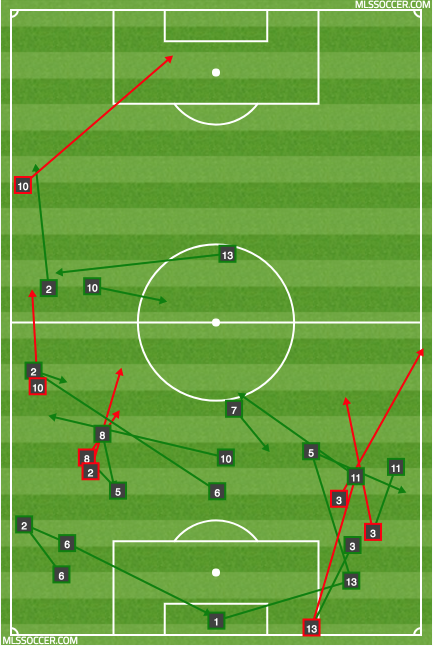 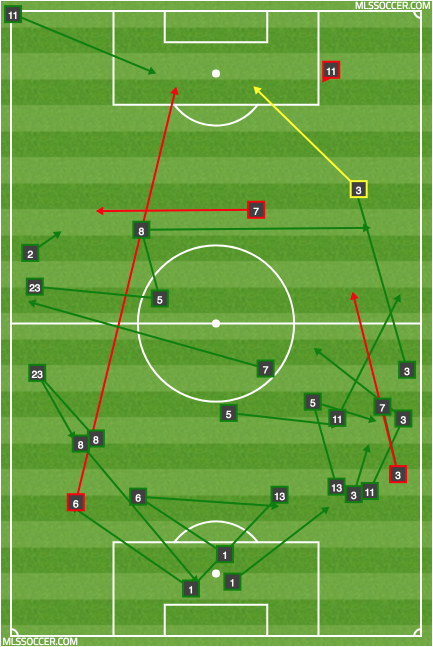 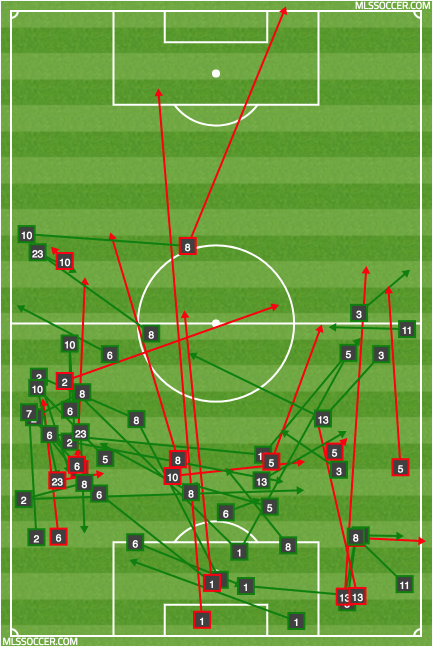 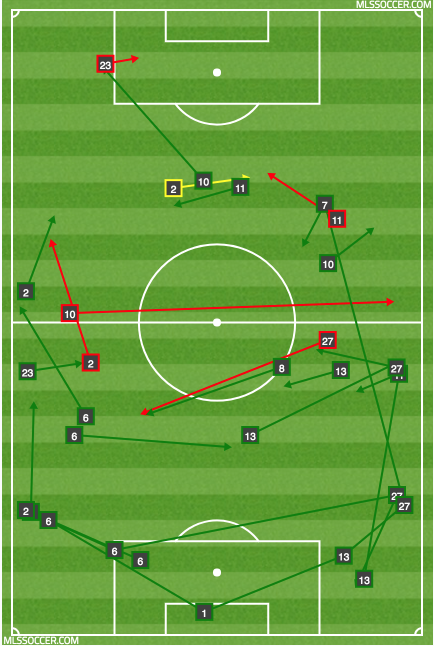 The patient approach to the attacking game gave NYCFC a second layer of tactical acumen to go alongside their standard bunker and counter attack.

With NYCFC sacrificing so much space in the field, Jesse Marsch decided to add two of his offensively inclined defenders to help start the attack in midfield and utilize the space afforded them. While that is not in itself an unusual move, the fact that the two players he added to the attack were centerbacks does raise an eyebrow.

“They laid off so much, right, that those two wound up being the free players a lot,” said head coach Jesse Marsch following the match. “Those two thought they had to make the game, they certainly had to initiate how we attack with the ball.”

The two centerbacks had more touches (155 > 127) and passes (132 > 98) than the pairing of Felipe and Sean Davis. That is a heavy load of responsibility for two centerbacks.

In addition to be involved in possession more than the average centerback, Lawrence and Escobar did a very good job taking care of the ball. Each finished in the top 5 of all field players in passes completed.

Looking at the formation, and the relative positions of Lawrence and Escobar, the formation could very well have been read as playing a 1-8-1 with two wide defensive midfielders.

Moving the Red Bull’s defensive players up into the midfield helped to pressure NYCFC and kept them from building quick strikes like the goals conceded away to NYCFC earlier this month.

The shape of things to come

As long as Jesse Marsch and Patrick Vieira stay at their respective posts, the dynamic of the Hudson River Derby will ultimately change. As the very young rivalry has matured, the opposing managers approach to the game has changed significantly.

This is no longer a soccer derby, but a chess match. Vieira and Marsch tinker their tactics and lineups looking for the type of balance that will prove fatal to their opposition. In 2017, NYCFC is ahead by forcing the Red Bulls to play how they are least comfortable, with the opposing team packing the box and looking to counter.

In the first meeting between these two teams in 2017, Vieira recognized the value of putting the Red Bulls under pressure in their half of the field to force turnovers and create opportunities. More importantly, it kept the Red Bulls from developing through their talented midfield and forced them to play long balls over the top to Bradley Wright-Phillips.

In their second meeting, Jesse Marsch employed the new look offense and NYCFC struggled to contain it. Despite taking the lead, the Red Bulls were able to see themselves back into the game, and the lead (briefly) by extolling the virtues of added numbers to clog the midfield. If not for three defensive lapses, the Red Bulls had found a winning game plan.

The third meeting was more of the same from Marsch, but Vieira saw that they needed to adjust the midfield to earn road points in Harrison. It started with the two points mentioned above, conceding midfield space, and attacking in spurts, but it also went towards negating the wing play that has been crucial for the Red Bulls in recent matches.

The Red Bulls offense is most effective when operating with a number of dangerous players. When NYCFC shut down the wings against the Red Bulls, that left the heavy lifting in the hands of Bradley Wright-Phillips and Sacha Kljestan. Ultimately, the Red Bull attack became predictable and NYCFC was able to keep most of the danger at bay, though the Red Bulls did bail them out with some poor finishing.