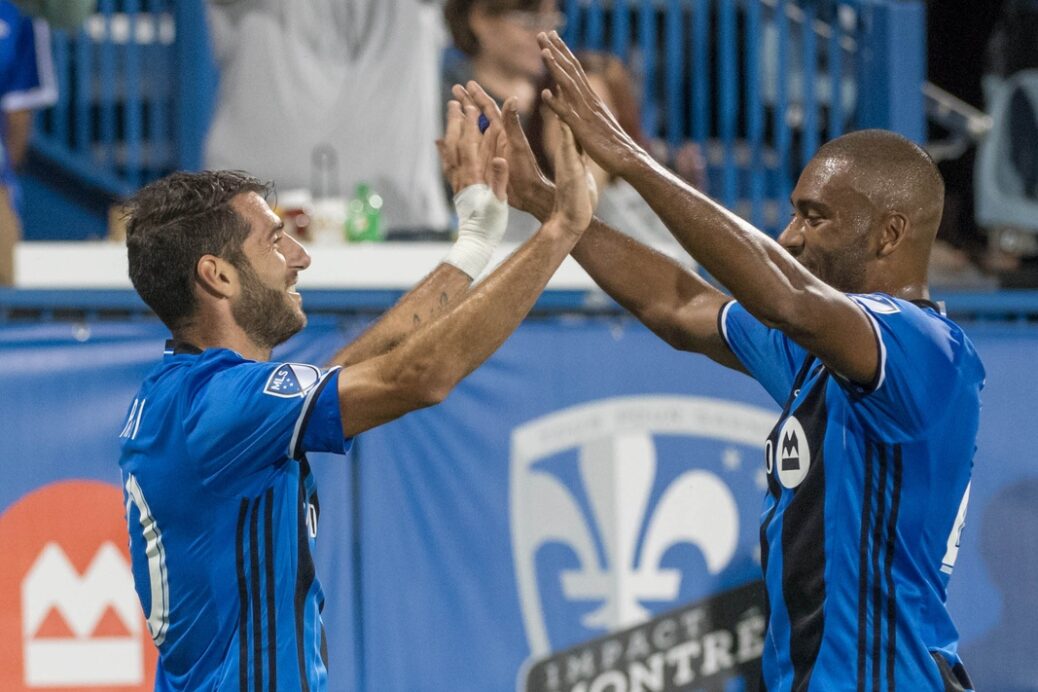 The Montreal Impact were free to simply celebrate their fourth straight win on Saturday night.

With transfer rumors and Ignacio Piatti’s direct comments to Impact fans regarding contracts tensions, the bleu-blanc-noir always had something rain on their parade in recent weeks. Not this time.

Everyone stayed back to hear if Piatti would throw another arrow in his second straight player of the game interview with the PA announcer. All they saw was an Impact huddle at the center circle, a walk around the field to thank the fans and drama-less interview from the Argentinean number ten.

“It feels great that’s for sure and credit to the players. We made five changes to the lineup tonight and we didn’t lower the tempo,” said Biello. “That’s pleasing to the staff and coaches and congratulations to the players for this intensity and this mentality to continue on that streak.”

Biello and the team also had the opportunity to reflect on how health and added depth helped the team regain success. But the sweetest of all for the Impact was the fact that with this fourth straight win, the team is now above the red line. After a tumultuous start to the season, Biello’s squad has picked up enough steam to push themselves into the playoff picture.

“We had some results that didn’t go our way at the beginning of the season, we played less games, we had some injuries, falling off a little bit in the table but we continued to believe all the time,” said Biello. “Right now, we’re putting ourselves in a position to fight for the playoffs, we’re putting ourselves in a position where we can get closer to some teams that are just ahead of us and that’s credit to them and their mindset.”

One of the players that did his part to elevate the team is Anthony Jackson-Hamel. Having helped the team by scoring late goal off the bench, the native of Limoilou in the Quebec City region participated in every Impact goal tallying one goal and two assists.

The 24 year old  mentioned that his “confidence is unshakeable,” and now starts to prove that while he is known for scoring goals as a substitute, he can score some as a starter as well.

“If you look at my starts, I also scored in my starts against Vancouver and Columbus,” said Jackson-Hamel. “Three goals as a starter means that I can score not only as a substitute so I proved it tonight.”

Jackson-Hamel was also able to pull out the best of his Designated Player teammates Piatti and Blerim Dzemaili. On the Impact’s first goal, Jackson-Hamel gives the ball to Dzemaili, which initiated Piatti’s opening goal. Later in the game, he left the ball to Piatti inside the 18-yard box for the Argentinean’s second goal.

“On the first goal, it was a good race by Blerim so I give him the ball. It’s good to be able to help the team in the buildup,” said Jackson-Hamel. “It’s great but in the end I’m there to score goals, that’s what I like doing more than getting assists, so I focus more on that.”

There was an Impact academy feel to Jackson-Hamel’s goal. Former academy teammate Louis Béland-Goyette was instrumental on the play with a perfectly placed through pass—a pass that was hours in the making.

“We spoke before the game about where to place the ball in those zones so it was good to complete it too,” said Jackson-Hamel. “After that, it’s about working on it and recreate this again and again and again.”

With four straight wins and a spot above the red line for at least a week in the bank, the Impact turn themselves to a game that was circled on the calendar. A game against Toronto FC takes all the preparation possible and for Mauro Biello, it was mere minutes after the end of Saturday’s game.

“At the end of my speech in the locker room told everyone that we play Toronto next week,” said Biello who later said this line was met with a large applause from the players.

For the Impact, there cannot be a better moment to take on their most bitter rivals, which also happens to be the No. 1 team in the league. Looking for their first five-game winning streak in MLS since the inaugural 2012 season, Biello and his team also have their loss in the Canadian Championship final in the back of their minds.

For Samuel Piette, this will be a first TFC-Impact rivalry game. The hometown boy recently back from his time in Europe can’t wait for next Sunday to see it for himself.

“I know it’s the big Classico, the big rival. It will be my first time against Toronto, I can’t wait to see what the atmosphere will be with 19,000-20,000 in attendance,” said Piette. “It will be a special one for me next week.”