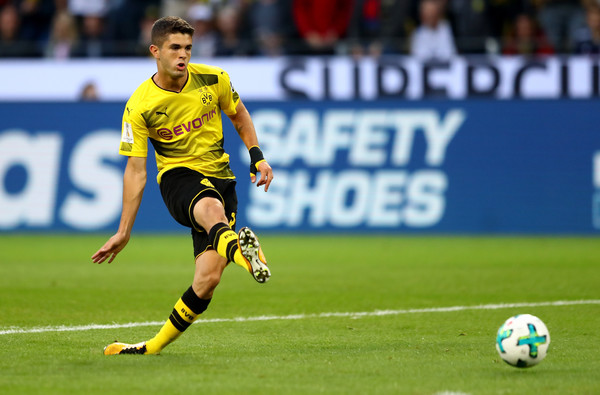 Christian Pulisic kept a strong preseason going with a goal, but he missed out on a trophy on Saturday

The American teenager provided Borussia Dortmund’s opening goal and strong play throughout the night, despite falling against Bayern Munich in penalties after a 2-2 draw in the German SuperCup.

Pulisic opened the scoring in the 12th minute in spectacular fashion. The young American stole the ball from Javi Martinez just inside the Bayern half before calmly dribbling forward and slipping the ball in.

His goal was canceled out by Robert Lewandowski’s six minutes later. Joshua Kimmich set the move up be breaking a Dortmund offside trap, receiving a long pass and sliding a cross to the Polish international forward for the tap in.

Dortmund went back in front in the 71st minute with a quick counterattack spearheaded by Pierre-Emerick Aubameyang. The Gabonese forward bolted down the right flank and hammered his shot home as Pulisic crept in from the opposite side. Munich were able equalize on a moment of chaos in the 88th minute. A Lewandowski free kick was headed off the crossbar before it bounced around in a sea of legs. Kimmich got the final touch that finally put the ball over the line, which was later issued an own-goal to Roman Burki.

Pulisic was subbed out in the final minute of regulation, so he missed out on the penalty shootout. The two sides traded goals until the third round of the shootout, when Kimmich saw his shot saved by Burki. Aubameyang gave his team a short-lived lead with the next shot, but Sebastian Rode’s fourth round shot was stopped and the teams were level again. Munich took the title by a 5-4 score in the sixth round when Niklas Sule scored for them and Sven Ulreich saved Marc Bartra’s shot.

It was Bayern Munich’s sixth SuperCup title overall and third in a row.

Pulisic and his Borussia Dortmund side have one more preseason match and a German Cup game before they open their Bundesliga campaign on August 19 against VfL Wolfsburg.