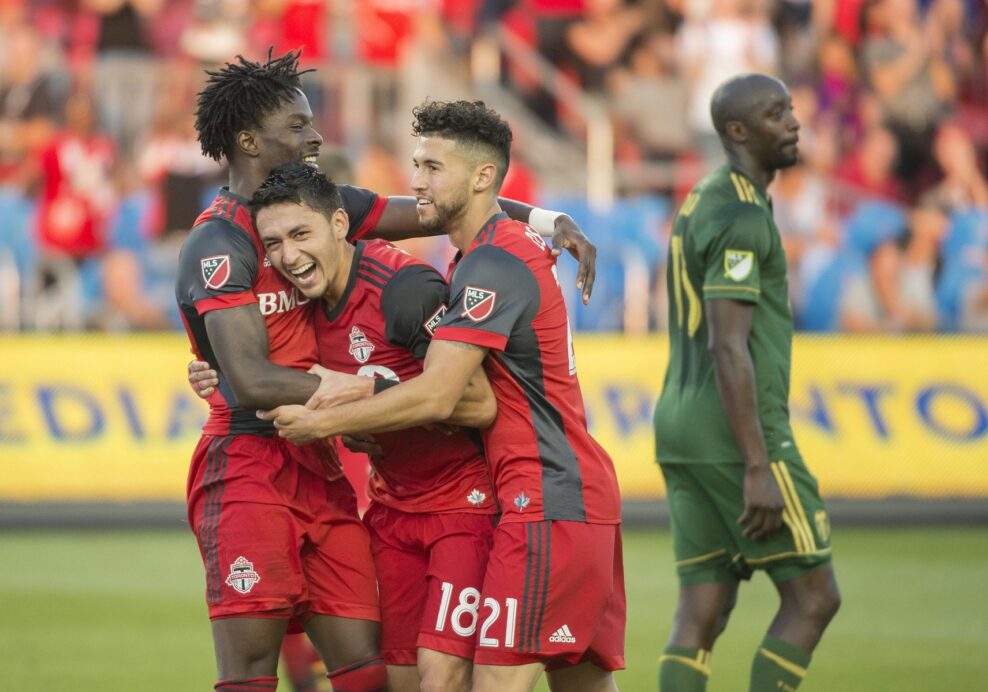 There were some shakeups at the top of this week’s SBI MLS Power Rankings, even if the league’s top team remained atop the list for yet another week.

Toronto FC held onto the crown as the league’s top ranked team thanks to a 4-1 shellacking of the Portland Timbers, but the Chicago Fire and Sporting KC fell to defeats just behind them. Contenders like NYCFC, the New York Red Bulls and the Seattle Sounders stepped up, though, shaking up the top 10 in a big way.

Elsewhere, the Houston Dynamo continued to soar while Real Salt Lake’s recent hot streak continued with yet another win. Add in the suddenly surging Montreal Impact and there’s plenty of room for change following a chaotic week

OUTLOOK: A lopsided win for Toronto FC thanks to a major second half spark. TFC remains the league’s deepest team and a lopsided win like the one over the Timbers showed they can hit you in many different ways. This time, it was Justin Morrow that starred in yet another demonstration of just how loaded this TFC team is.

THIS WEEK: vs New England Revolution on Sunday.

OUTLOOK: NYCFC continues to roll as a rookie and a vet combined to lead them to a big win over the LA Galaxy. David Villa and Jonathan Lewis stunned with spectacular goals, and NYCFC has now one three of four to surge up the Eastern Conference table. It remains to be seen if their defense can hold up for the long haul due to the relative lack of depth, but NYCFC is certainly in position to contend through the final months.

THIS WEEK: vs Toronto FC on Saturday.

OUTLOOK: Each team in MLS hits a rough patch at some point, but the Fire’s is lasting longer than many expected. The Fire have now lost four of five, and, worst of all, they haven’t looked very competitive in doing so. Now, this roster is too talented to fall all the way back to the pack, but there is plenty of reason for concern heading down the home stretch.

THIS WEEK: vs. Minnesota United on Sunday

OUTLOOK: After edging the San Jose Earthquakes on penalty kicks to advance to the U.S. Open Cup final, you can excuse Sporting KC for falling to the Sounders. Featuring a makeshift lineup, SKC simply ran out of gas on Saturday. It happens, and they’ll be fine heading into this week’s match against Minnesota United.

THIS WEEK: vs Minnesota United on Sunday.

OUTLOOK: The Sounders are perhaps the hottest team in the league. Now unbeaten in eight straight, the Sounders have earned points in a variety of ways throughout the recent run. This time, it was a narrow win over a tired Sporting KC team thanks to a Jordan Morris-Clint Dempsey connection. Another match against Minnesota United is a welcome one as the Sounders look to push that streak to nine in a row.

OUTLOOK: A little bit of a late summer break for Atlanta United, who returns to action on Aug. 23 against a retooled D.C. United.

THIS WEEK: at Sporting KC on Saturday.

OUTLOOK: A draw is a step in the right direction for an FC Dallas team that was sputtering. After losing by a combined 7-1 scoreline in their previous two outings, it was good to see the defense return to form. Scoring, though, can be an issue on Saturday as they take on the league’s best defense in Sporting KC in a clash of Western Conference contenders.

THIS WEEK: at Portland Timbers on Friday.

OUTLOOK: The match may be remembered for Kaka’s red card, but don’t take anything away from the Red Bulls. The team has now won seven of 10 and, even without Daniel Royer, they’re getting hot at the right time. The midweek win over FC Cincinnati only helps as the Red Bulls push on to compete for trophies.

OUTLOOK: That type of performance is what makes the Dynamo scary down the stretch. When clicking the Dynamo can attack with the best of them, making them a danger to any team out West. The Dynamo are now unbeaten in six straight, although three of those six are draws. Turning those one-pointers into three would certainly see them make a big push to finish atop the West.

THIS WEEK: vs New York Red Bulls on Friday.

OUTLOOK: The Timbers were humbled on Saturday with a lopsided loss to TFC. The beatdown ended a three-match unbeaten run and pushed the Timbers back towards the red line. The West is a dogfight, and the Timbers will need more effort and cohesion if they hope to survive and make the postseason.

THIS WEEK: vs Philadelphia Union on Saturday.

OUTLOOK: A lopsided defeat for the San Jose Earthquakes ends a two-match winning streak. On their day, the Dynamo can score at will, and the scoreline flatted the Dynamo in a way thanks to late goals. That said, it was an incomplete performance from the Quakes, who need to show a bit more firepower going forward.

THIS WEEK: vs Houston Dynamo on Saturday.

OUTLOOK: The Whitecaps are one of those teams battling out West, and the loss to the inconsistent Revs certainly doesn’t help their case. Matches like Saturday’s against the Houston Dynamo will go a long way toward determining how the West shakes out, and the Whitecaps will need a better performance if they hope to remain in the hunt.

THIS WEEK: at Orlando City SC on Saturday.

OUTLOOK: A statement win for the Crew, who remain in the hunt in the East. Even without recent signing Pedro Santos, the Crew looked dangerous in the attack against a very, very good Fire team. The Crew get a bit more dangerous when Santos gets involved, making them a potential dark horse for a late run.

OUTLOOK: The Impact are quietly climbing as their big players continue to carry them back up the Eastern Conference table. The Canadian club has now won three straight, catapulting them back into the race. They’ll need Ignacio Piatti, Blerim Dzemaili and Matteo Mancosu to continue to find their form if they hope to make a late push.

OUTLOOK: Things just keep getting worse for Orlando City. The Lions have won just twice since April and have now grabbed just one point from five. As things stand, Orlando is only five points out of the hunt but, unless they recapture their early season form, they may have too much ground to make up and too many teams to catch.

OUTLOOK: A solid win for the Revs, who stood strong against a tough Whitecaps team. Is it too late? Probably, but with Krizistian Nemeth getting involved, the Revs should be a bit more fun from here on out. This season is largely about showing well and setting a tone as one would expect the Revs to try different looks down the stretch to prepare for what should be a busy offseason.

OUTLOOK: RSL has now gone six straight without a loss following a narrow win over D.C. United in a match delayed by flooding. RSL has rapidly evolved under Mike Petke, who deserves plenty of credit for instilling confidence in a team that had absolutely none just several months ago.

OUTLOOK: The Union continued to be the league’s most inconsistent team with a lopsided loss to the Impact on Saturday. The Union have now alternated wins and losses for four games following a streaky summer that kept them on the outside of the playoff hunt. If there’s any hope left for this season, it will need to show itself fast with a solid stretch of wins. If not, it might be time to start getting some younger faces more looks.

OUTLOOK: Perhaps no team is struggling more than the Galaxy at the moment. The Galaxy have claimed just one point from eight games and the introductions of Sigi Schmid and Jonathan dos Santos have done little to stop the chaos. Now, with Jelle van Damme reportedly set to leave, the Galaxy’s free fall may be unstoppable.

OUTLOOK: Draws won’t be enough for the Rapids anymore, even if a tie with FC Dallas is generally an okay result. The result saw Pablo Mastroeni lose his job as the Rapids made a big change as this season appears all but lost. What other changes are made remains to be seen, but the Rapids are playing for 2018 now.

THIS WEEK:  at Seattle Sounders on Sunday.

OUTLOOK: The Loons had a week to recover heading into a big matchup against the surging Sounders. With new winger Ethan Finlay involved, it’s interesting to see how Minnesota United lines up and utilizes it’s plethora of attacking weapons heading down the home stretch.

THIS WEEK: at Colorado Rapids on Saturday.

OUTLOOK: Another week, another loss for D.C. United. That’s eight in a row for D.C. as the club’s new signings couldn’t quite lift them to a win in the first week of the new-look team. A match against a fellow cellar-dweller seems a perfect time to break out of a slump, though, and start playing with new pieces.