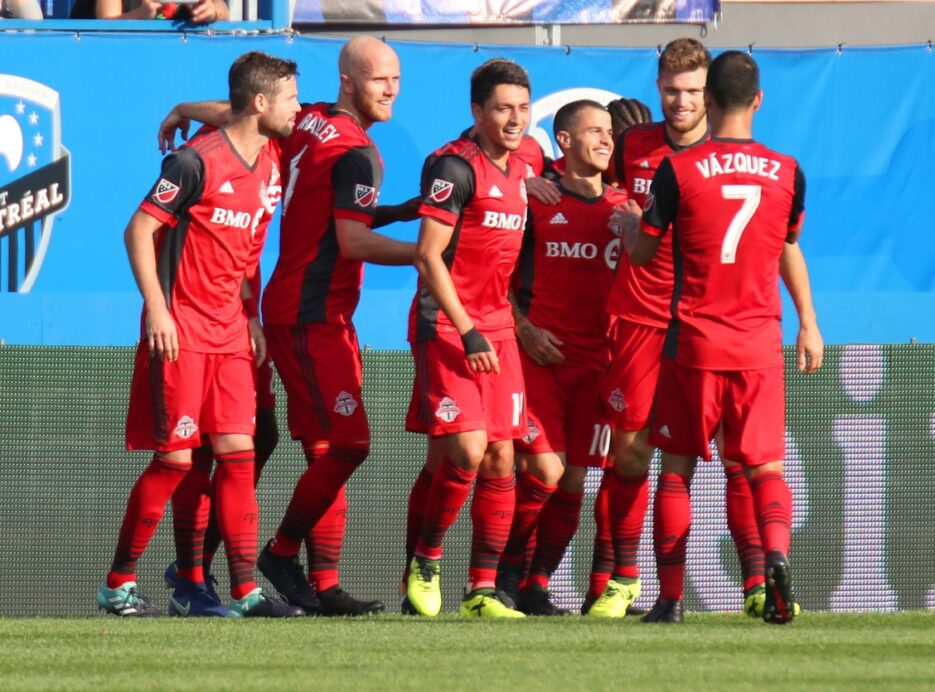 With less than two months remaining in the MLS season, it’s certainly crunch time across the league as the battle for the postseason continues.

The Columbus Crew helped their case in a big way with a pair of wins, giving them a little bit of room in the Eastern Conference race. They weren’t the only team to earn a maximum six points, though, as Real Salt Lake and D.C. United vaulted up the rankings with big weeks of their own.

Toronto FC, though, remains king after yet another flawless week. TFC took down the Philadelphia Union before beating the Montreal Impact, keeping hold on the No. 1 spot.

With that said, here’s a look at the latest SBI MLS Power Rankings:

OUTLOOK: Sebastian Giovinco continued his MVP form scoring three goals in two big wins for Toronto FC. They remain atop the East and look well on their way to a Supporters’ Shield ceown.

OUTLOOK: After three consecutive wins, NYCFC earned a point in a 1-1 draw against rivals New York Red Bulls. They return to Yankee Stadium for two huge out of conference matches as they look to stay in the race while David Villa joins Spain.

OUTLOOK: The Sounders extended their unbeaten run to 11 matches, but only recorded two points in their last two matches. A should-win match comes after the international break with the LA Galaxy coming to Seattle.

OUTLOOK: Sporting KC saw their weekend fixture in Houston postponed due to Hurricane Harvey. They continue their road trip at NYCFC on Sep. 6 as they look to continue to push for the top spot out West.

OUTLOOK: The Fire’s horrid run of form continued last weekend as they fell to Minnesota United, 2-1. Things don’t get easier for the Eastern Conference contenders as they face several conference playoff hopefuls in the next few weeks. Those matches could go a long way towards determining if the Fire can avoid the opening round of the postseason.

OUTLOOK: Following 17 days off between matches, Atlanta United only took one point from a possible six. A late equalizer in Chester showed some fight, and now Tata Martino’s side open their new stadium with a six-match homestand.

OUTLOOK: The Red Bulls avoided the season sweep against rivals NYCFC, and now start a two-match road trip on Sept. 2. Picking up points in Dallas will be tough, before traveling to visit the struggling Chicago Fire in two matches that will be vital for postseason positioning.

OUTLOOK: With two matches in a five-day span, the Timbers will certainly take four points out of six. Following the bye, the Timbers continue their three-match road trip at NYCFC.

OUTLOOK: FC Dallas’ winless run extended to six matches, as the team failed to pick up wins in last week’s fixtures. A home match against the New York Red Bulls on Saturday is turning into a must-win to remain in playoff contention.

OUTLOOK: After a disappointing draw in Orlando, the Crew returned home for two important wins. They conclude the homestand on Sept. 10th against Sporting KC as they look to hold onto third place in the East.

THIS WEEK: vs. Chicago Fire on Saturday.

OUTLOOK: A four-match winning run was snapped on Sunday as the Impact fell against Canadian rivals Toronto FC. The Impact conclude a four-match homestand on Saturday against a struggling Fire side as they look to push back into the picture.

OUTLOOK: The Whitecaps snatched four points from a possible six, including a huge point in Seattle. The Whitecaps now return home for a four-match homestand which could be important to a playoff spot in the brutally tough Western Conference.

OUTLOOK: The Dynamo earned an important road point in Dallas ahead of Hurricane Harvey’s arrival over the weekend. The cancellation of their home fixture with Sporting KC has now been moved to October 15th. Following the bye, they welcome a last-place Colorado Rapids to town in what is a must-win at this point in the season due to the congestion out West.

OUTLOOK: It was a streaky week for the Earthquakes who were drubbed midweek before handing out a drubbing themselves on the weekend. A convincing win over the Galaxy boosted the Earthquakes back into playoff contention, and lifted them into the bye week on a positive note.

OUTLOOK: RSL look like a completely different team after back-to-back drubbings of the Earthquakes and Rapids. It’s been quite a resurgence for Mike Petke’s side, who are suddenly a point clear of the playoffs and will need strong performances against the West for a chance at the postseason.

OUTLOOK: After squandering points in New York, the Revs dropped another result on the road. Saturday’s home fixture against Orlando will be huge for both teams and their slim hopes of staying in the playoff picture.

OUTLOOK: D.C. United made it three wins in a row, defeating Atlanta and the Revs in a four day span. Ben Olsen’s side now head into the bye week before concluding a three-match homestand, one that’s been headlined by scrappy goals and clean sheets.

OUTLOOK: The Union’s playoff chances took a major hit last week after only taking one point out of a possible six. A lopsided defeat in Toronto hurt, but a late draw against Atlanta last weekend poured salt in the wound. Jim Curtin’s side need a miracle to make the postseason.

OUTLOOK: Adrian Heath’s side earned their first ever MLS road victory and snapped a two-match losing streak in the process. Following the bye week, the Loons welcome the Union to TCF Bank Stadium as they look to play spoiler throughout the home stretch.

OUTLOOK: After a week off, the Galaxy fell back to their usual form losing twice in five days. Sigi Schmid’s side return home on Saturday against fellow strugglers in the Rapids to kick off a busy, yet pretty inconsequential, month of September.

THIS WEEK: at LA Galaxy on Saturday.

OUTLOOK: The Rapids are now winless in their last eight matches, and they’ve look pretty sad to watch. A road match in LA this weekend, provides a possibility of points if the Rapids come out for an entire 90 minutes.