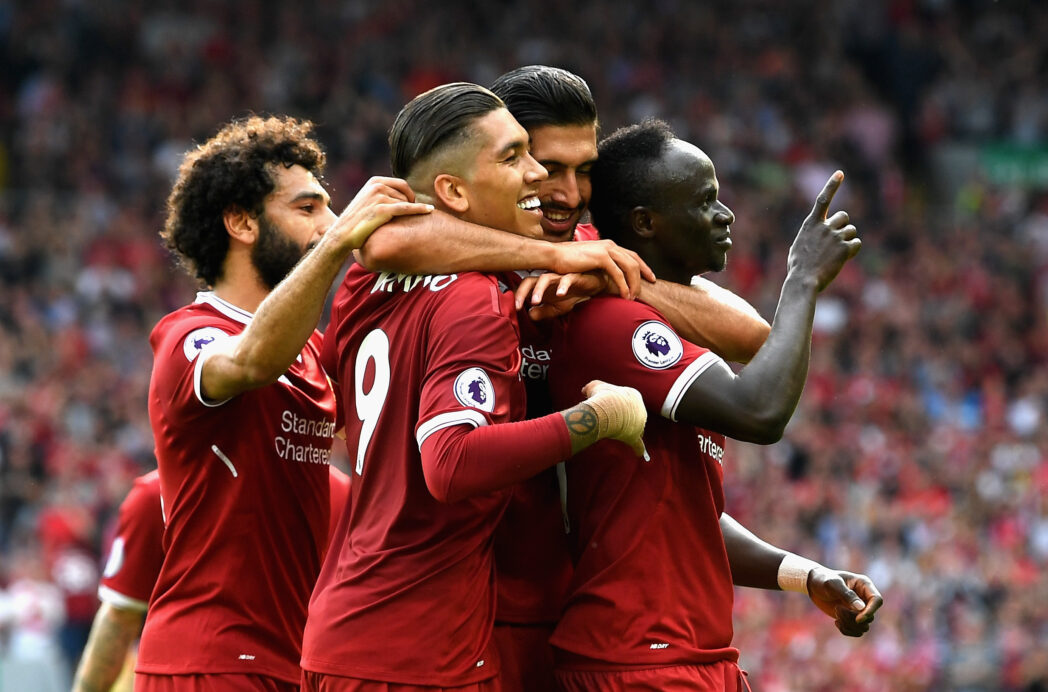 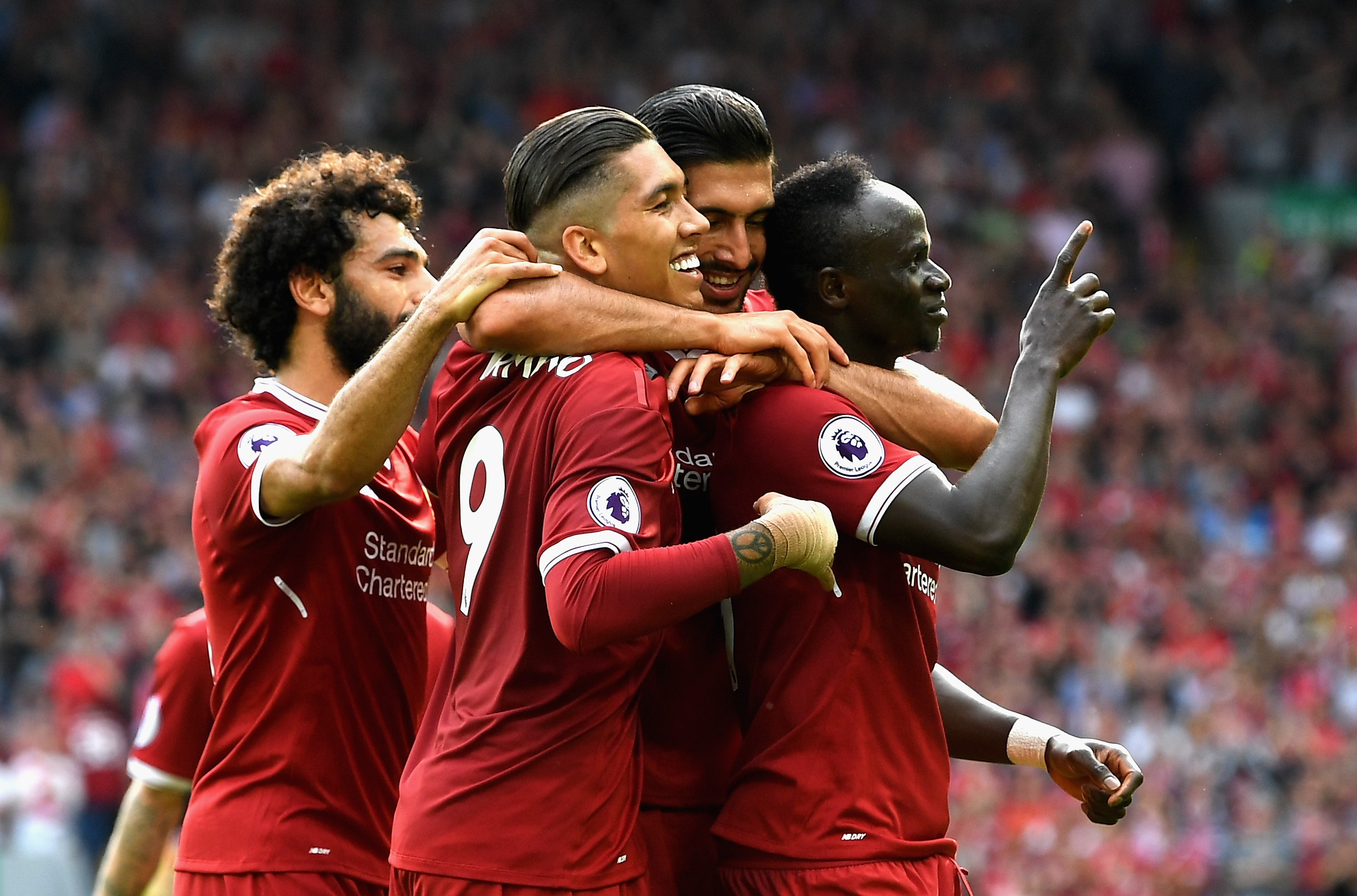 Liverpool capped a great week, drubbing EPL rivals Arsenal 4-0 at Anfield on Sunday. Jurgen Klopp saw four different players find the back of the net in a dominant performance on Merseyside. Roberto Firmino’s 17th-minute finish opened the scoring for the Reds, before Sadio Mane’s curled-effort doubled the lead before halftime. Mohamed Salah slid home Liverpool’s third on a 57th-minute breakaway before Daniel Sturridge slammed the door with a close-range header. Arsenal failed to record a shot on goal, suffering their second consecutive road defeat this season. Liverpool make it two league wins, and four victories so far this season across all competitions.

Elsewhere on Sunday, Chelsea shutout Everton at Stamford Bridge in the EPL’s early fixture. Monaco drubbed Marseille in the Ligue 1 match of the day, while RB Leipzig fought back for three points against Freiburg in Germany. Napoli and Torino earned comfortable home wins in Italy, while Real Madrid hosted Valencia in Spain.

Chelsea made it two consecutive league wins after a 2-0 home success against Everton on Sunday. Cesc Fabregas’s 27th-minute goal proved to be the winner at Stamford Bridge, before Alvaro Morata’s close-range header added insurance ahead of halftime. Everton failed to record a shot on goal after a busy week in both league and European action. Jordan Pickford made five saves for the Toffees. Ronald Koeman’s side suffered their first defeat across all competitions this season.

Burnley used a late equalizer from a recent signing to earn a point in a 1-1 draw at Tottenham Hotspur. Following a scoreless first half, Tottenham found the breakthrough four minutes into the second half. Dele Alli’s 49th-minute tap in gave the hosts a 1-0 advantage. However Mauricio Pochettino’s side couldn’t hang on for three points as Chris Wood’s 92nd-minute finish earned the Clarets a deserved point. Tom Heaton made four saves for Burnley while Hugo Lloris made two.

Here are all of Sunday’s EPL results:

A brace from Marco Asensio salvaged a point for Real Madrid in a 2-2 draw against Valencia on Sunday. Asensio’s 10th-minute strike from long-range opened the scoring for Los Blancos. However, the lead only lasted eight minutes as Carlos Soler finished from close range to level the score. Geoffrey Kondogbia’s 77th-minute effort put the visitors ahead 2-1 before Asensio leveled the score from a left-footed free kick. Real Madrid suffer their first dropped points of the season, while Valencia remained unbeaten in La Liga play.

For 82 minutes it looked like visiting Sevilla would have to deal with a second straight draw to start their new season. However, Sevilla midfielder Ganso had other ideas, scoring an 83rd-minute winner in a 1-0 win. The Brazilian finished off Gabriel Mercardo’s assist from inside the box with a left-footed finish. Getafe had three shots on goal, but fell for the first team this season. Champions League outfit Sevilla will feel good after picking up their first three points of the year.

Going into the halftime break, RB Leipzig were possibly staring at their second straight league defeat this season. Ralph Hasenhuttl’s side used a quartet of second-half goals, including a brace from Timo Werner to run away 4-1 winners. Werner’s 48th-minute finish cancelled out Florian Niederlechner’s first-half opener. Willi Orban added to the lead after 55 minutes, before Werner added his second from left-footed finish. Bruma’s right-footed strike capped the final score at 4-1 at Red Bull Arena. Freiburg suffer their first defeat of the year, while RB Leipzig earned their first win.

Newly promoted Hannover made it two wins from two, after a 1-0 home success against Schalke. A 67th-minute finish from Jonathas was all the hosts needed to earn another three points. The Brazilian forward got on the end of Marvin Bakalorz’s assist and rifled home past Ralf Fahrmann. Schalke only had one shot on goal, suffering their first loss of the year.

Torino earned their first win of the season on Sunday, edging Sassuolo 3-0 at home. Andrea Belotti scored the hosts first goal of the afternoon, scissor-kicking past Andrea Consigli to the high center of the goal. Adem Ljalic added to the lead after 84 minutes, before Joel Obi capped the perfect day for the hosts. Sassuolo were held to two shots on goal, suffering their first loss of the year.

Napoli fought back from an early 1-0 deficit to defeat Atalanta 3-1 at the Stadio San Paolo. A 61st-minute winner from Dries Mertens lifted Maurizio Sarri’s men to their second straight league win. Bryan Crisante’s 15th-minute header put the visitors ahead, which was a lead they took into halftime. Piotr Zielinski pulled Napoli level after 56 minutes, ripping home from a long-range right-footed shot. Mertens put the hosts ahead five minutes later, before Marko Rog added an insurance goal in the 87th-minute. Atalanta drop their second consecutive league match this season.

Defending Ligue 1 champions Monaco remained perfect this season, brushing away Marseille 6-1 at the Stade Louis II. Radamel Falcao added to his hot start, scoring a brace while four other Monaco players got in on the scoring. Kamil Glik’s second-minute goal put Monaco ahead 1-0 before Falcao added to the lead from a 20th-minute penalty kick. Falcao’s second goal of the afternoon came after 34 minutes, as the Colombian headed home from a set-piece. Adama Diakhaby’s left-footed finish made it 4-0 prior to halftime. Djibril Sidibe’s 68th-minute header added to the humiliation before Remy Cabella pulled one back for Marseille. Fabinho’s 79th-minute penalty kick capped a great performance from the hosts, who were in total control from the get go. Marseille suffered their first loss of the season across all competitions.

Angers and Lille shared the points in a 1-1 draw at the Stade Jean-Bouin. Lassana Coulibaly opened the scoring for Angers on the hour mark, heading home Angelo Fulgini’s cross to the top left corner. Nicolas de Preville’s leveled the score for Lille, rifline home from long-range eight minutes later. Neither side could muster up a winner however, dealing with a point each. Angers remain unbeaten this season, while Lille snap a two-match losing run.