While Supporters’ Shield may be out of reach, Patrick Vieira, NYCFC ready for playoff push 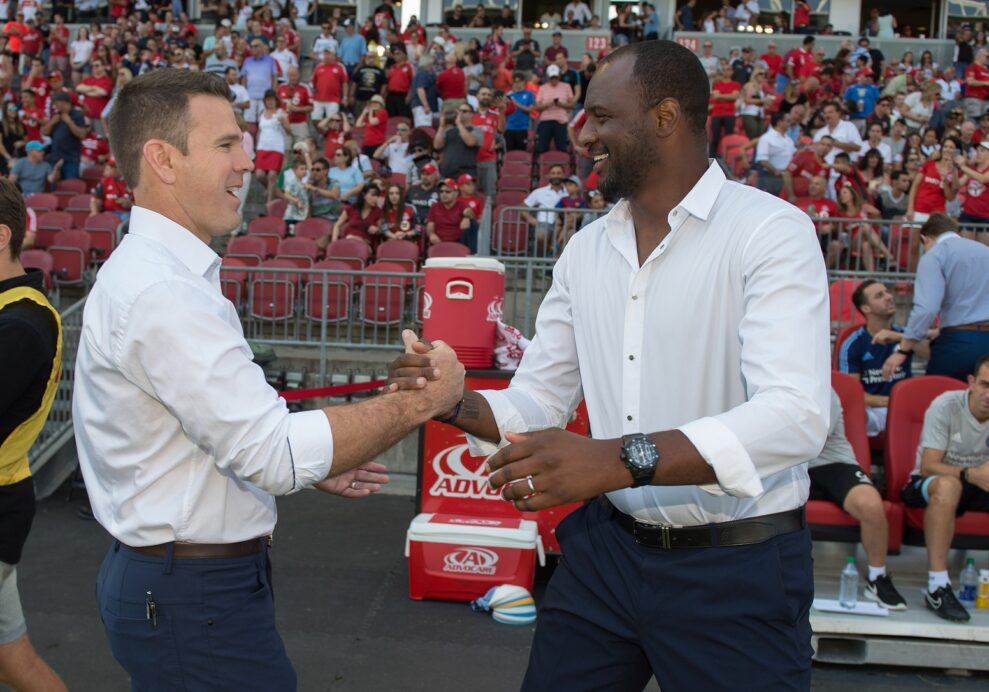 Sunday’s win was yet another statement for New York City FC. Down a goal and largely toothless for 70 minutes on home turf, NYCFC battled back and fired a stoppage time goal. It was a win that came in exhilarating fashion, one that seemingly vaulted NYCFC right back into the Supporters’ Shield race.

Not so fast, at least according to Patrick Vieira.

“Yes it was important to win, because it’s good to get close to Toronto, but I believe Toronto is already the champions. I think the other teams are going to fight for the second spot and Toronto will win the league. You saw it on (Saturday) night. They are really strong and I don’t think anybody will catch them.”

That’s not to say there’s nothing to play for, however. NYCFC currently sits in second place, and finishing strong will be vital as the march to the postseason continues. At the end of the day, you want to position yourself for the playoffs in the best way possible, even if that push doesn’t end with first place or a Supporters’ Shield trophy.

Sunday’s win did that and more. For 70 or so minutes, NYCFC looked far from a team worthy of any postseason finish. They were largely disappointing in the attack all through the first half, failing to register a shot on target. Sean Johnson, one of the team’s more consistent players, fumbled a shot on goal leading to a Teal Bunbury finish. NYCFC was down a goal late in Sunday’s match, one which easily could have ended in a season-reviving win for the Revs.

Instead, David Villa began the comeback with a close-range finish, reigniting the Yankee Stadium crowd for a late push. For the game’s final 20 minutes, NYCFC played like a team that was ready for a postseason series, a team that looked like it could contend for an MLS crown.

“Points are important. At this point in the season, every point matters,” Johnson said. “You can see now, I think with nine games left, teams are really pushing to scrape together points. And we put ourselves in a position this season to be in a good spot to push late on, so we gotta keep going, continue to keep building, and I think as long as we keep putting performances together, I think we’ll be alright.”

“I think winning is the name of the game,” he added. “And however you do that, whether it’s pretty some days, whether it’s scrappy, I think you have to find a way to come away with wins.”

To continue getting those wins and those results, Vieira will rely on role players a lot more down the home stretch. Sure, it’s nice when Villa steps up to carry the team with yet another MVP-level performance, but, he can’t lift the group to silverware alone.

They’ll rely on players like Lewis, who scored his second big goal in as many games. They’ll look to someone like Khiry Shelton, who is finally back into the fold after injury issues. They’ll look to forward Sean Okoli and midfielder Mikey Lopez to help plug gaps in different situations ans scenarios.

“The team was a little bit blocked,” Villa said of Sunday’s match. “Ugo, Khiry and Jonathan this time come from the bench and give the power to the team to come back again so it is really important. I told you a few games ago we need everybody. For winning a game, we need 11 players. For winning a trophy or to have a really good season, we need all the roster so it is really, really important to us that today the guys of the bench helped us win the game.”

After passing Sunday’s test, NYCFC now looks ahead to the next big one. The New York Red Bulls are next up, and NYCFC’s second place standing is far from safe. A loss to the cross-river rivals brings them right back to the pack, while a win could maybe move NYCFC one step closer to proving their own head coach wrong in the Supporters’ Shield push.

Regardless of the result or what it means in the long-term, NYCFC is keeping things micro over macro. Playoff season is just around the corner, yes, but they’re not looking past the short-term along the way.