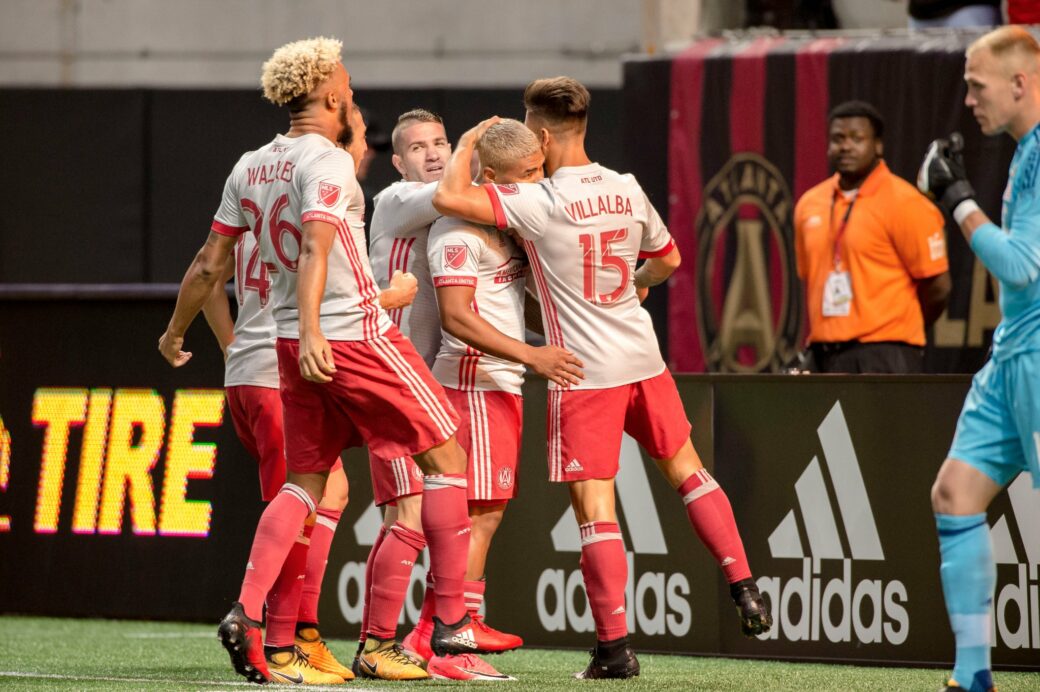 Atlanta United will look upon its second game at Mercedes-Benz Stadium with fond memories, but the New England Revolution will want to forget it ever happened.

The home club scored early and often as the Revs wittled themselves down to nine players before the half time whistle sounded. Their 7-0 demoliton of New England puts them in excellent position to qualify for the playoffs as the end of the regular season draws near.

The Five Stripes got the jump on their opponents early on and never looked back. It all started in the second minute when Josef Martinez collected a through-ball from Miguel Almiron along the left wing and proceeded to shred the flustered Revolution back line and sneak a shot inside the near post from a very tight angle.

The nightmare continued for the Revs in the 14th minute when Xavier Kouassi stomped on Yamil Asad’s heel from behind and proceeded to clatter into him as he hobbled towards the ball. After a lengthy chat with the VAR, Baldomero Toledo brandished the red card and Kouassi was off.

Martinez found his second from the penalty spot in the 31st minute after Je-Vaughn Watson handled in the penalty area. His hat trick came eight minutes later, again from twelve yards away, after Antonio Milnar Delamea reached a hand out to deny a clear goal in the six yard box. He, too, was sent off for his trouble.

The first-half destruction was completed with a close range finish from Anton Walkes just before the half time whistle.

The second half was merely a formality, but the hosts decided to tack on more goals anyway. Atlanta United continued its dominance against their shorthanded foes by adding a fifth on the night on a 70th minute free kick from Kevin Kratz. The sixth came at the stroke of 73 minutes with a well placed roller off the foot of Asad that found its way inside the far post. The seventh and final tally came in the final miniute with a tap in from Hector Villalba.

The victory helped Atlanta United move past the New York Red Bulls into fifth place in the Eastern Conference with 42 points, three points behind the Chicago Fire for third place with a pair of games in hand. Next up for Atlanta United is a home date with Orlando City SC on Saturday afternoon.

The Revs will be forced to lick their wounds with the knowledge they are six points back of a playoff spot with only six games left to play. They return to action on Saturday when they make the trek out to Children’s Mercy Park to face Sporting Kansas City.

Josef Martinez scored the early goal to set the tone and then maintained his composure from the penalty spot twice in an eight minute span. It was a very productive Wednesday night for the Venezuelan.

Josef Martinez’s goal in the second minute was an early dagger, but the Revs didn’t truly take themselves out of the match until the second red card. It’s hard to blame Delamea for leaving a hand raised on his sliding block attempt, but the clear and obvious red card ended any chance of a Revolution comeback.

Je-Vaughn Watson’s night lasted all of 14 minutes before his violent conduct red card sent him to an early shower and set the entire tone for the destruction of his team.