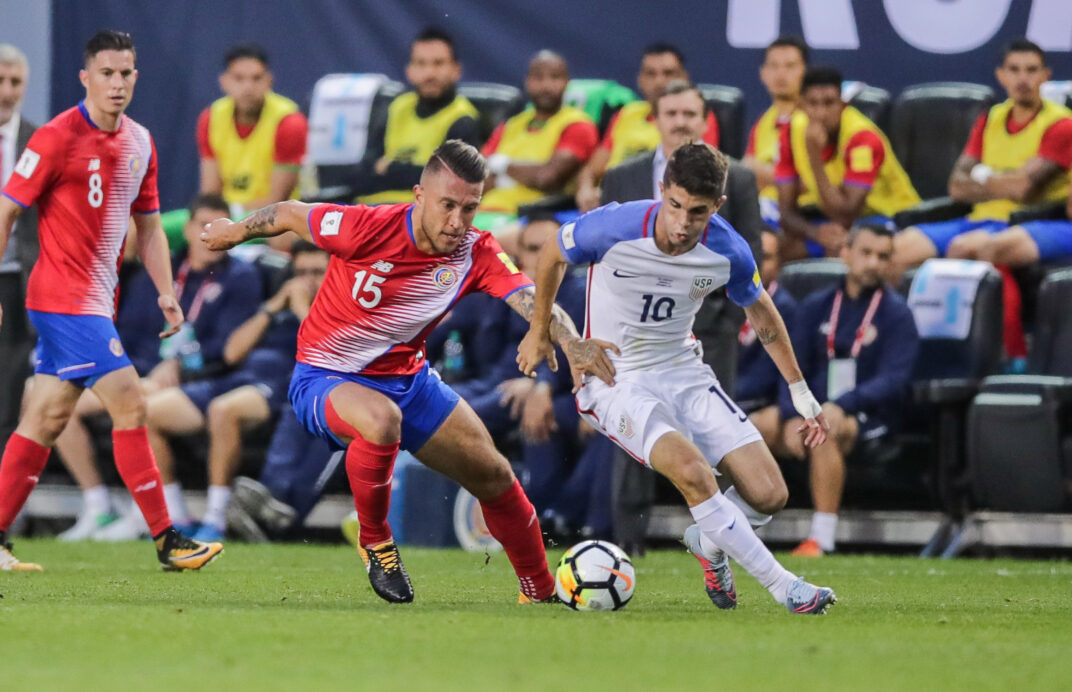 Let’s start with the positives and just get that out of the way. Graham Zusi looked solid at right back. Michael Bradley had a good game in the central midfield. Jorge Villafana made some plays at left back.

Now that that’s out of the way, we can discuss what really happened in the U.S. Men’s National Team’s loss to Costa Rica.

There wasn’t much that went right for the U.S. on Friday night. The defense? Shambolic. The attack? Nonexistent. The overall performance? Spineless and inexcusable.

A number of things went wrong on Friday and there’s plenty of blame to go around. There was no one player or one incident responsible for what proved to be a big-time Costa Rica win. Rather, it was a bad team performance, and the team got what they deserved.

With that in mind, here’s a look at what went down on Friday night:

We had yet to really see Christian Pulisic struggle on the international level. We hadn’t seen signs of frustration or anger. Thus far, Pulisic’s talent generally took care of everything, and the USMNT has benefited.

Pulisic struggled on Friday, and he did show signs of frustration throughout the loss, and Costa Rica deserved all the credit.

Starting Pulisic on the wing gave him a very distinct role. He was meant to stretch the Costa Rica line and create one-on-one havoc. The problem was he rarely got one-on-one. He was routinely doubled by Francisco Calvo and Bryan Oviedo, who suffocated him each and every time he touched the ball. There was a moment where he wiggled his way free down the sideline before being hacked down by David Guzman, but Pulisic was largely checked even before he received the ball.

There will be moments where this will happen, especially if Pulisic is out wide. It’s a role different than the one he plays in at Dortmund, whose 4-3-3 allows him more space than the USMNT’s 4-4-2.

When Pulisic is checked, it’s up to his team to step up and exploit the extra eyes fixed on him. They didn’t, and it was easy to see signs of frustration as the match wore on.

Everyone knew playing in the New York/New Jersey area was a risk and, as the “Vamos Ticos” chants rang down, that risk seemed real. Despite what seemed to be a pro-USMNT crowd, Costa Rica was well represented, and when Los Ticos went in front, they were heard.

Now, was it a bad look? Sure. U.S. Soccer felt confidence playing in the area, and for the first 30 minutes or so that confidence was rewarded. It felt like a home game until suddenly it felt like it didn’t.

Venues will always be debated for U.S. Soccer. Even the hallowed ground of Columbus is now at risk following last year’s loss to Mexico in November. Going forward, U.S. Soccer will have to make better venue decisions for big games, and we might not see the New York area in play for quite some time.

For as much talk as there is about formations and tactics, the game of soccer generally comes down to individual players making individual plays in individual moments. Sometimes, you just need a ball to bounce your way, and Costa Rica got those bounces on Friday night.

Arena’s team selection wasn’t the sole reason the USMNT lost, but it certainly didn’t help. Geoff Cameron and Tim Ream were not a good central duo. The flat two-man midfield was largely outnumbered. Christian Pulisic was wasted on the wing. Tactically and formationally, the USMNT simply wasn’t set up in the best way to beat Costa Rica on the day.

Arena himself admitted the USMNT was outplayed and outcoached after the match, and it was a combination of both of those factors that led to the loss.

The Costa Rica backline is always one of the top units in CONCACAF. The three-man wall has shut down many a team. Ask Italy. Ask England. Ask Uruguay.

Bobby Wood’s passing touch was frequently exposed as he wasn’t given the time and space to turn. Jozy Altidore was largely left out to dry with the midfield pinned too deep to play any meaningful ball forward. Christian Pulisic was strangled out wide. Did Fabian Johnson even play?

With little connection between the Michael Bradley and Darlignton Nagbe midfield and the USMNT attack, there was little to no life up top. That disconnection produced one good look, one which produced a spectacular Navas save.

It was a disjointed USMNT performance from back to front, and, because of it, the USMNT attack was held silent for the first time in quite awhile.

Geoff Cameron’s partnership with Tim Ream didn’t work. Both players were far from good individually and the two were brutal to watch as a team. The spacing was terrible and the individual mistakes were costly. It wasn’t hard to see.

Arena will receive flack for not playing Omar Gonzalez or Matt Besler, but anyone would have expected better than what we saw on Friday. Cameron, the USMNT’s most consistent center back, had his first stinker in quite awhile. Ream, riding solid Fulham form, made some frustrating mistakes before settling down a bit in the second half. Of the two, Ream probably had the better game, and he was the one beaten on the goal. That says a lot about how poor things were.

The question is where we go from here. Does Arena ride with a three-at-the-back set on Tuesday due to the personnel involved? Does he bring Gonzalez and/or Besler into the mix?

It remains to be seen, but it’s pretty safe to say we won’t be seeing the Cameron/Ream partnership again any time soon.