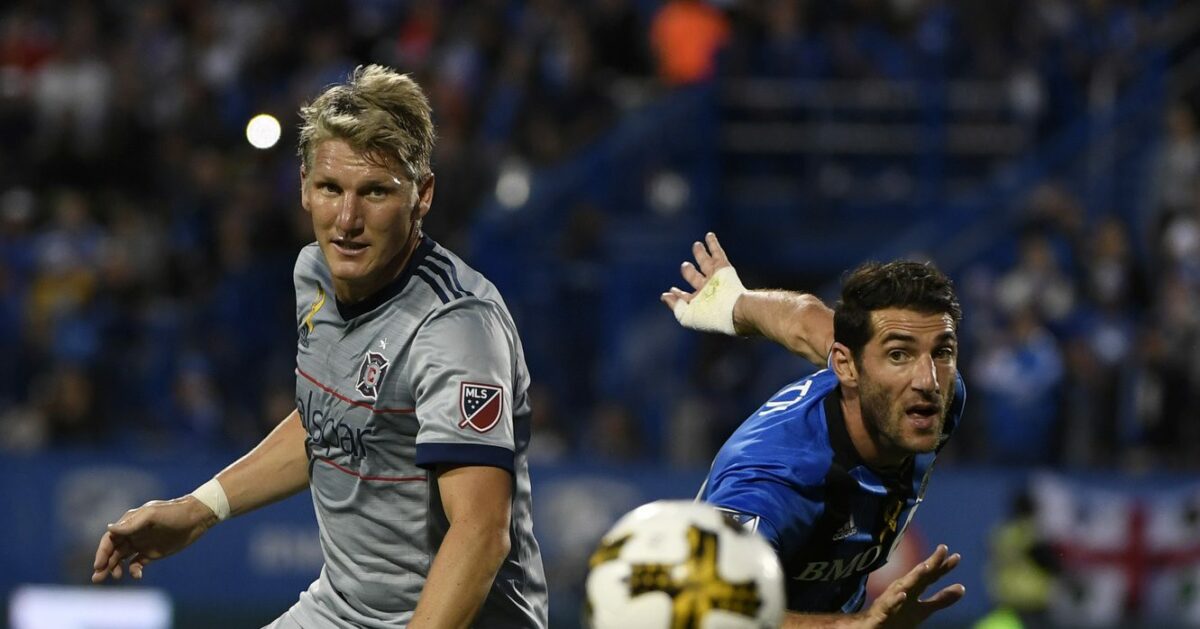 It needed a Video Review intervention, but Deian Boldor’s tackle on Bastian Schweinsteiger turned a yellow card into a a red card. It also hurt the World Cup winner’s calf, but it certainly didn’t stop the German star from stepping up in a big match.

Schweinsteiger appeared to be injured, but he left the Stade Saputo grass for the sidelines and as soon as he got back, the boos were heard all over the pitch.

“I was next to him when that happened and I said, ‘Expect that but I know you’re going to handle it,’ and he did great,” said Fire head coach Veljko Paunovic. “I didn’t even have to tell him because he’s a number one, he’s a champion and I loved seeing how he handled that situation.”

Paunovic was right. Schweinsteiger kept his cool despite being booed at every touch of the ball and six minutes later, the German had found the game-winning goal: a tap-in effort from the penalty spot coming from a low cross sent from the right side of the 18-yard box by Matt Polster.

“We talked about it afterwards and I was saying, ‘It sucks when you are injured and you’re getting booed like that,’” said Fire goalkeeper Matt Lampson. “He said that he’s had that happen numerous times in his career and he’s won everything he can in soccer so I don’t think that the boos were bothering him too much.

“I’m proud to call him a teammate, he’s the leader of team and he helped us win tonight,” he added.

For Schweinsteiger, it was about the fans not seeing the replay of the foul that injured his right calf and later forced him to substitute off with an additional tightness in his quadriceps. Both him and Paunovic think that, in addition to VR, showing the replays wouldn’t be a bad idea.

“I think [if] the spectators would [have seen] the play [on the big screen], they would see it differently but no one sees if there was a foul or how the tackle was, so I understand,” said Schweinsteiger. “For me, I was just happy to continue because I feel not so well actually, the calf is tight and I was happy that I was able to run again.”

“I hope that in the future we can actually see on the big screen what actually happened so the people understand better that situation,” added Paunovic.

With uncertainty still floating around how serious the injury really is and if Schweinsteiger will need to miss games, the thought of not having the German international in the squad is not great for the Fire.

“I’m looking at [his injury] right now and it is not pretty. So hopefully he recovers well and we could use him on the field next Saturday,” he added.

Regardless of the injury, Schweinsteiger added few points to the Fire’s playoff contentions. With a 2-7-4 away record prior to Saturday’s win and a dreadful string of losses in August, getting the win on the road made it that much better for the team.

For Paunovic, the result was “very memorable and very important” for his team’s spirit.

“It has been a long time since we didn’t win and we were looking for a moment like that on the road,” said Paunovic. “In [difficult times], I think it helps that spirit to bounce back to where we were before the break.”

Keeping the same cool that allowed him to score Saturday’s game-winning goal, Schweinsteiger is still very much aware that the Fire still have work on the table.

“It was huge but, you know, the job is not done. We still have games to play,” he said. “We need to come back to that rhythm we had before that break and I hope that this victory gives us confidence for the next games.”

Something that Lampson would like his team to work on in the future is how to close a game out, despite the fact that Schweinsteiger had subbed off and that Dax McCarty was out on international duty. With seconds left in the game, Ignacio Piatti—who was on a six-game scoring streak—had the opportunity to tie the game up but the shot was ultimately saved.

“He’s the last guy that we want to have the ball at his foot with no time left,” said Lampson. “To me, the way we finished that game was unacceptable. We played like we were down a man not up a man.”

Having dealt with their August losing streak, the Fire will now head back to Chicago to play two games at home in the hopes of hitting their pre-Gold Cup break run of form. First, the New York Red Bulls will visit Toyota Park on Sept. 9 and on Sept. 16 the Fire will host DC United.