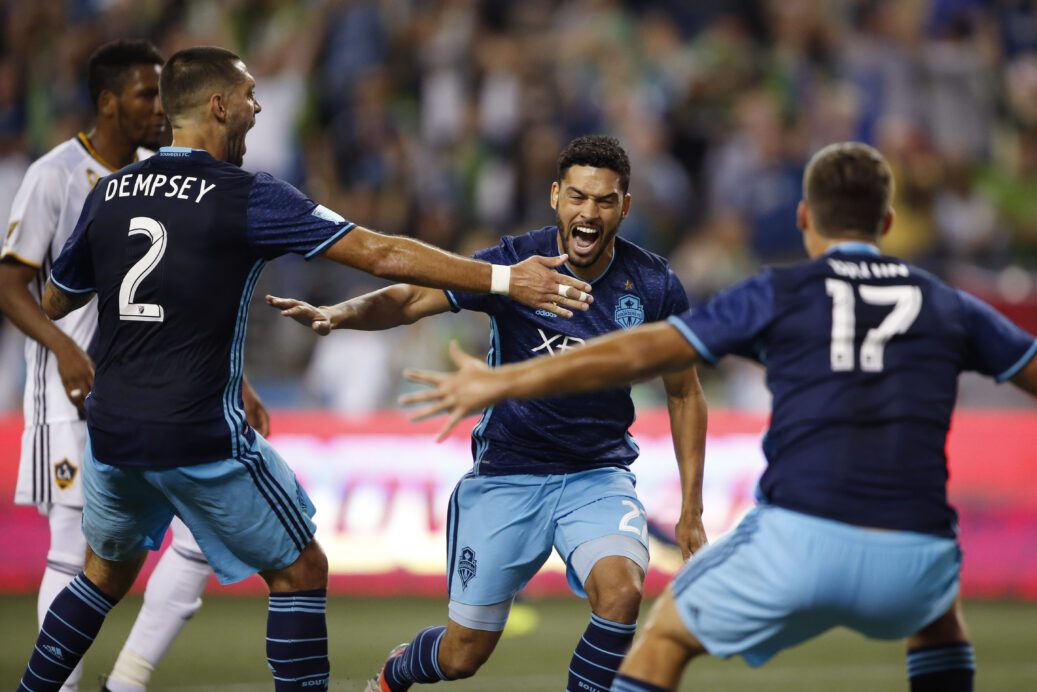 SEATTLE — The Seattle Sounders struggled to outplay the visiting LA Galaxy for much of Sunday night’s match, but a late goal from substitute and hometown favorite Lamar Neagle salvaged a much-needed point in front of 44,697 at CenturyLink Field.

The 1-1 draw extends a club-record 12 match unbeaten streak for the Sounders, but it is also the third straight draw for a team in a tight race for first place in the Western Conference. With a game in hand, the Sounders (11-7-10, 43 points) trail the Portland Timbers by a lone point heading into the home stretch.

“We’ve got to figure out a way,” said Sounders head coach Brian Schmetzer, “to be a little bit more goal dangerous — (to) have that last little bit of quality — in the final third.”

And it was not a result without its costs: Panamanian national team captain Roman Torres was ejected with a controversial late red card, while U.S. international Jordan Morris exited midway through the second half with a strained right hamstring. Schmetzer said the team won’t know the extent of the injury until Monday, but Morris did not put any weight on his right leg as he left the field and was visibly distraught on the sideline.

The Galaxy (7-14-6, 27 points) now have four points from their last two matches, after starting head coach Sigi Schmid’s tenure with four losses and a draw from five games. It was also the first visit to Seattle for the longtime Sounders skipper since replacing first-year manager Curt Onalfo in late July.

“I thought our fighting spirit was good and I thought we, at times, played some very good soccer,” said Schmid. “It was a little difficult at times and the refereeing seemed a little inconsistent to me.”

Schmid nearly left town with an upset win, but Neagle equalized in the 85th minute, stepping into a skipping, first-touch cross from center back Roman Torres and rifling a half-volley past goalkeeper Brian Rowe.

It was Neagle’s first goal since returning to the Sounders via a trade with D.C. United in early August. A native of Federal Way, Washington, Neagle is now in his third stint with the club since 2011.

“It felt great,” Neagle said. “It was great to score at CenturyLink, being in green, particularly in front of that goal, in front of (the supporters’ section), is an amazing feeling.”

Torres earned a red card for an 89th-minute tackle on Jermaine Jones at the edge of the penalty area, but Giovani dos Santos sent the ensuing free kick off the wall for a corner kick. The Galaxy didn’t threaten again.

Gyasi Zardes opened the scoring in the 25th minute, slipping into space between three Sounders defenders in the heart of the penalty area and heading a Romain Alessandrini cross past goalkeeper Stefan Frei. Jonathan dos Santos initially found Alessandrini streaking into space down the right side, and the French winger was able to dribble into the penalty area before picking Zardes out of the crowd.

It was the second goal in two matches for Zardes, after going more than a year without scoring. It was also the 10th assist of the season for Alessandrini.

Dempsey nearly equalized 10 minutes later, forcing Rowe into a leaping save with a rifled free kick from 30 yards out.

That was as close as the Sounders came to equalizing until the 79th minute, when substitute Will Bruin misfired on a short cross from midsummer acquisition Victor Rodriguez, sending a soft header past the far post.

The Sounders began the match on the front foot, creating a handful of half-chances in the opening minutes, while outshooting the Galaxy 11-4 in the first half and controlling 57 percent of possession.

Dempsey misplayed the first chance of the match for either side, failing to corral an Oniel Fisher cross to the far post and leaving an easy clearance for the Galaxy defense. Rodriguez initially found Fisher with a lovely through ball to the end line.

In the 14th minute, third-year midfielder Cristian Roldan passed up an open look at the edge of the penalty area, instead laying off a ball to Dempsey inside the arc. Arguably the best field player in the history of American soccer, Dempsey promptly sent a first-time shot into the northern grandstand.

Morris looked to have opened the scoring for the Sounders in the 21st minute, chipping goalkeeper Jon Kempin off a Dempsey through ball, but assistant Kathryn Nesbitt raised her offside flag.

Other than the goal, first-half chances were few and far between for the visitors. Defender Daniel Steres got his head to an 11th-minute corner kick from Alessandrini, but found only the near post side netting.

In the 17th minute, Alessandrini unleashed a long-distance shot from well outside the penalty area deflected off a defender and forced Frei into a diving save that pushed the ball over the crossbar.

Jermaine Jones. Long criticized for lofting low-percentage long balls and roaming forward in ways that leave his team vulnerable, the longtime U.S. international was a picture of discipline on Sunday night, frustrating Dempsey and the rest of the Sounders’ attack throughout.

The Jordan Morris injury. The second-year Stanford product was in full sprint when he grabbed his hamstring and quickly left the match. The team won’t know the extent of the injury until Monday at the earliest, but it’s an injury that has implications for both the Sounders’ title chances and World Cup qualifying for the U.S. men’s national team.

Clint Dempsey. Actually not a bad match overall, but the Sounders need him to be a clinical finisher if they are to contend for MLS Cup — especially if Jordan Morris is sidelined for any length of time.