Patricof on NYCFC: “We have a chance to be one of the biggest clubs in the world” 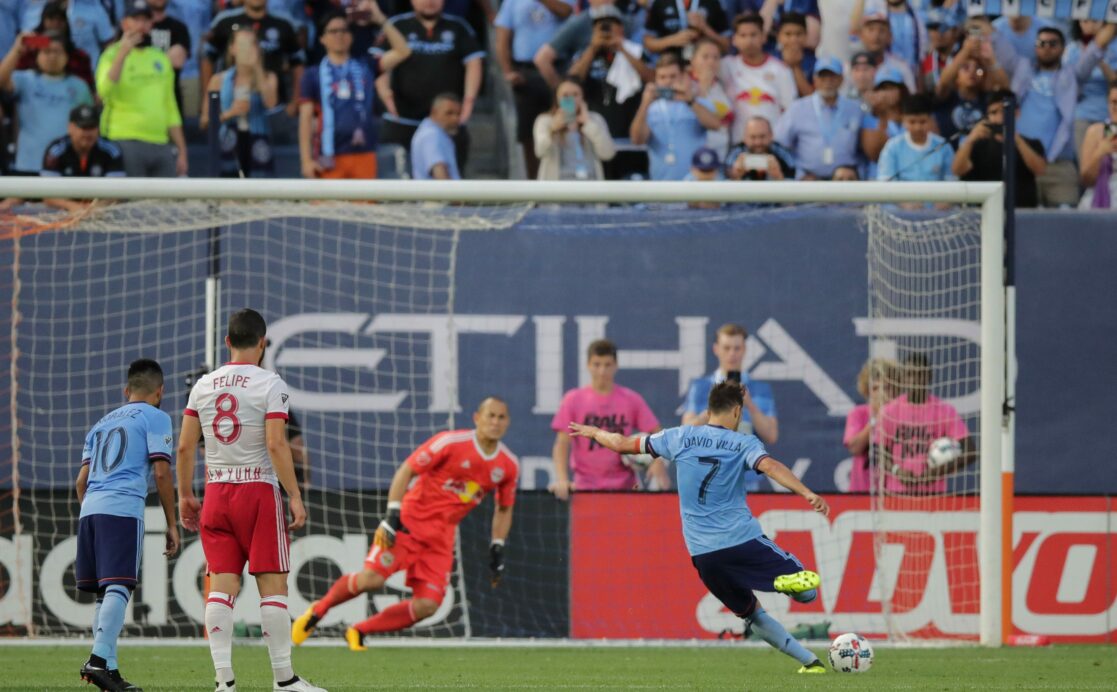 Some 35 years later, Patricof still resides in the city but no longer has to embark for Long Island to watch a professional match. He requires transport to 161st Street in the Bronx where Patricof cheers for the boys in blue with sound reasoning – he is the President of the New York City Football Club in Major League Soccer.

“I’d have my birthday parties at their (Arrows) games,” said Patricof. “I grew up in the city and played soccer here my whole life. It’s hard for people to imagine but we played on dirt and with broken glass in Central Park and Riverside Park. It’s very cool to hopefully have a positive impact on the game in the city now with NYCFC.”

Formerly the President and COO of Tribeca Enterprises and the Tribeca Film Festival, Patricof has already left an indelible impression on the city. Among film festivals, Tribeca has become a global leader.

“I joined the Film Festival right after 9/11,” said Patricof. “Over the next 11 years we learned how to put together the right team and create something that has had an impact and lasting value. I saw the same kind of DNA and identity with NYCFC.”

Under Patricof, NYCFC is ubiquitous in the five boroughs with projects including the New York City Soccer Initiative, a partnership with Mayor deBlasio’s Administration whereby 20 mini pitches will be constructed across the city in the most underserved neighborhoods. Consequently, Patricof is assured that the club has the support of the Mayor’s office in the most central of concerns within NYCFC supporters’ groups – the construction of a soccer-specific stadium.

“In my experiences – we have this great project with the mayor’s fund building mini pitches – there is support for the sport and the club and a future home here is pretty broadly accepted,” said Patricof.

Although Patricof said the club has had staff working on a new stadium, they have recently amplified the commitment to the mission.

“First of all, it’s been a very, very active process,” said Patricof. “In January of this year we took an incremental step and brought over our Chief Infrastructure Officer from Manchester City to work full-time in the New York City offices. He works day in and day out fully dedicated to the search and I’m involved as well.”

Approximately 35 sites have been reviewed and Patricof revealed that the club was close to consummating a deal more than once.

“The club has been very close on many potential sites,” said Patricof. “Then something has happened at the last minute.”

A recent report suggested that three current properties are under serious consideration. Patricof did not confirm the number but said there are primary deliberations at present.

“Right now we have multiple sites under active consideration – some involve public processes and some are private,” said Patricof. “I think this is going as well and we’re as far along in terms of progress certainly since I’ve been here over the last 18 months.”

Absent of a stadium solution, the recent change-of-venue for the September 23 home game versus the Houston Dynamo further agitated the fan base. Due to a conflict with the Yankees (who own a 25-percent share of NYCFC), the club was forced to move their Dynamo match to Rentschler Field in East Hartford, Connecticut – home of the UConn Huskies football team.

“It doesn’t change anything we’re doing with a stadium but there is a change in my need to talk more actively about it,” said Patricof. “I have known since day one that I took this position that one of the big things that might happen is this – a home game moved.”

In response, Patricof has hosted a series of breakfast meetings with a variety of supporters groups and season ticket holders. He has personally responded to every email sent to him and has spoken to others on the phone.

“When I take the phone calls I think people are usually surprised,” said Patricof. “I think it’s our responsibility. This could happen again – we live in that situation.”

In addition to potential conflicts if the Yankees earn a playoff spot, Rutgers will host Maryland at Yankee Stadium on November 4 – a possible MLS home playoff date for NYCFC.

Patricof is undaunted. His primary role and responsibility is to ensure that his administration supports the sporting side of the business and he can see distinct parallels from the nascent days at Tribeca.

“People look at Tribeca now and say oh, it’s a global institution,” said Patricof. “The press said it wouldn’t exist after two years. I told everyone to not get discouraged, that this is an opportunity. That’s when it’s fun to be part of an organization – to be in the trenches.”

NYCFC supporters appear to have a leader who cherishes a good fight.

“We’ve got an incredibly competitive marketplace – and not just sports,” said Patricof. “You just have to go in there and fiercely compete. When you think about what connects us in this world of sports there isn’t anything bigger than soccer that brings us together.”

From MISL to MLS, Patricof has witnessed the evolution of a sport that left him with cuts and bruises on the fields of his youth. Now he envisions exponential growth for a franchise in its third season.

“I’m confident,” he said. “We have the potential at NYCFC to be one of the biggest clubs in the world.”