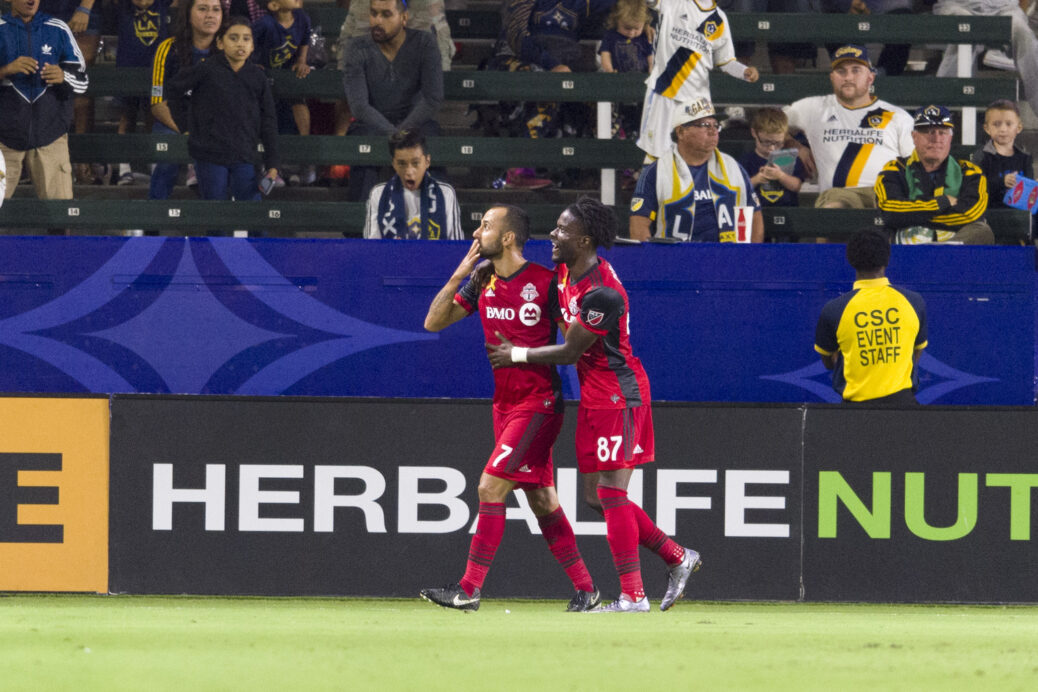 Toronto FC just keeps rolling on. The Eastern Conference power earned another huge win on the road last week and is on the verge of clinching the team’s first Supporters’ Shield.

The Reds can seal that precious piece of silverware as early as this week if everything goes their way.

The top of the Western Conference is still wide open as the top four clubs are only seperated by a single point in the standings. The Vancouver Whitecaps remain on top, but their Cascadian rivals and Sporting Kansas City are hot on their tail.

THIS WEEK: vs. Montreal Impact on Wednesday, at New England Revolution on Saturday.

OUTLOOK: With a playoff spot wrapped up, Toronto FC could clinch the Supporters Shield before anyone else even clinches the playoffs with a pair of wins or one win and an NYCFC loss this week.

OUTLOOK: After earning an away point last week, a win against the Dynamo or a Montreal Impact loss will lock of a playoff position for the second year in a row.

OUTLOOK: The Sounders are now unbeaten in 13 games thanks to a draw against lackluster FC Dallas. Despite this run of form, they are still down in fourth place out West, but they are just one single point away from the top.

OUTLOOK: The four-game losing skid that plagued the Fire throughout August is a thing of the past. They’ve won two of their last three matches this month and have a winnable road game against the Philadelphia Union. A win and an Impact loss puts them in the playoffs for the first time since 2012.

OUTLOOK: A four-point week saw the Caps jump above the mess at the top of the Western Conference and into the lead for the time being. They currently hold a one point lead over the Timbers, Sounders, and Sporting Kansas City for that coveted top spot.

OUTLOOK: The Timbers unbeaten streak may have come to an end last week, but they did make some history anyway when Diego Valeri scored in his MLS record eighth consecutive game. They lost their lead in the Western Conference, but still hold second place and are only a point back of the first-place Whitecaps.

OUTLOOK: The Crew were robbed of a huge west coast win thanks to a late, late, equalizer by former Crew midfielder Tony Tchani. They will take the away draw, but a win would have put them within striking distance for second place in the East. Instead, they sit down in fourth and would need a miracle to avoid a tricky knockout round match come playoff time.

THIS WEEK: vs. LA Galaxy on Wednesday and vs. Montreal Impact on Sunday

OUTLOOK: What a week it was for Atlanta United. They hung a touchdown on the Revs and took part in a thrilling draw with Orlando City SC in front of a record crowd. They get another two game week this time, where two wins could put them on the doorstep of clinching the playoffs in the opening season.

THIS WEEK: vs. New York Red Bulls on Wednesday in the U.S. Open Cup Final, vs. LA Galaxy on Sunday

OUTLOOK: SKC remains in the hunt for the Western Conference title as they are one of the three clubs locked together at 44 points. This will play a pair of home games this week, including a shot at a trophy in the U.S. Open Cup Final.

THIS WEEK: at Sporting Kansas City on Wednesday in the U.S. Open Cup Final, and at Columbus Crew on Saturday.

OUTLOOK: Another lackluster draw over the weekend has raised a few concerns at Red Bull Arena. They can put those to the side with a trophy if they can get the job done in the U.S. Open Cup Final, but that will do little to improve their still solid, but possibly deteriorating, MLS playoff chances.

OUTLOOK: The Quakes got off the losing wagon with a gutty 1-0 win against the Dynamo, which has them a point clear of a playoff spot in the crowded Western Conference. They will follow that up with a cross country road trip to D.C. in a game they are certainly capable of winning.

OUTLOOK: RSL kept up their strong form with a win against the visiting Timbers last week and they are now sitting in the final playoff spot thanks to the games won tiebreaker. They are going to need wins, however, as both FC Dallas and Houston Dynamo have a pair of extra games to play. They can get that started with a win against another Cascadia side at home this weekend.

OUTLOOK: Things just can’t go right deep in the heart of Texas. They are still without a win since July 22 and looked very drab against Seattle last weekend. They have a winnable road match against Minnesota this week, but it’s hard to imagine FC Dallas being able to go on the road and getting a win, even against the lowly Loons.

OUTLOOK: The Dynamo dropped out of the playoffs with their second straight 1-0 loss last weekend and now must recover at Yankee Stadium, where NYCFC has only lost twice all season long. They’re still tied for sixth place with 38 points, so a loss wouldn’t be a disaster, but they will need to get moving if they want to salvage a spot in the postseason.

OUTLOOK: The Lions showed a lot of resolve by walking into a rowdy Mercedes-Benz Stadium and earning a draw against a record crowd last weekend. They are still well outside the playoff picture and face a tough trip to the Rose City to face a Timbers team that only has two home losses on the year.

OUTLOOK: After a disappointing showing on the west coast in midweek, Minnesota flew across Canada and left Stade Saputo with a win. That has to serve as a confidence boost heading home to face a struggling Dallas team.

THIS WEEK: at Toronto FC on Wednesday, at Atlanta United on Saturday

OUTLOOK: The Impact saw their playoff hopes slip further away when Abu Danladi hammered home a late winner for the visiting Loons last weekend. It was a home loss that Montreal really wants back as their week ahead looks brutal. They head to BMO Field for a 401 Derby that doesn’t look good before flying down to rowdy Mercedes-Benz Stadium against the red hot Atlanta United. Their six points back of a playoff spot and they probably aren’t closing that gap this week.

LAST WEEK: Lost, 7-0, at Atlanta United on Wednesday, and lost 3-1, at Sporting Kansas City on Saturday

OUTLOOK: It was a week to forget for the Revs as they lost two games by a combined score of 10-1 with three red cards. Then they went and fired Jay Heaps on Monday. Things don’t get any easier for them as they welcome a Toronto FC team that cannot lose to Gillette Stadium. Their playoff hopes are hanging by a thread as it is and nothing short of an unexpected win here would save them.

OUTLOOK: D.C. continued their poor season by getting whacked by the Fire in the Windy City last week. They continue the countdown to the end of RFK Stadium this week trying to play spoiler over San Jose Earthquakes.

OUTLOOK: The playoffs are out of reach for the Union, but they did get an honorable 0-0 draw at Red Bull Arena last week, so that’s something. Now, they look to slow down the Chicago Fire, who are still shooting for a first round bye in the playoffs.

THIS WEEK: at Sporting Kansas City on Sunday

OUTLOOK: The Galaxy were humbled by Toronto FC, who are destroying everyone these days. Now, they go on the road looking to spoil an SKC team aiming for a first round bye in the playoffs.

OUTLOOK: After a draw against one of the Eastern Conference leaders, they look to play their part in the race for the top spot in the West as they visit the Great White North to face the conference leaders, Vancouver Whitecaps.