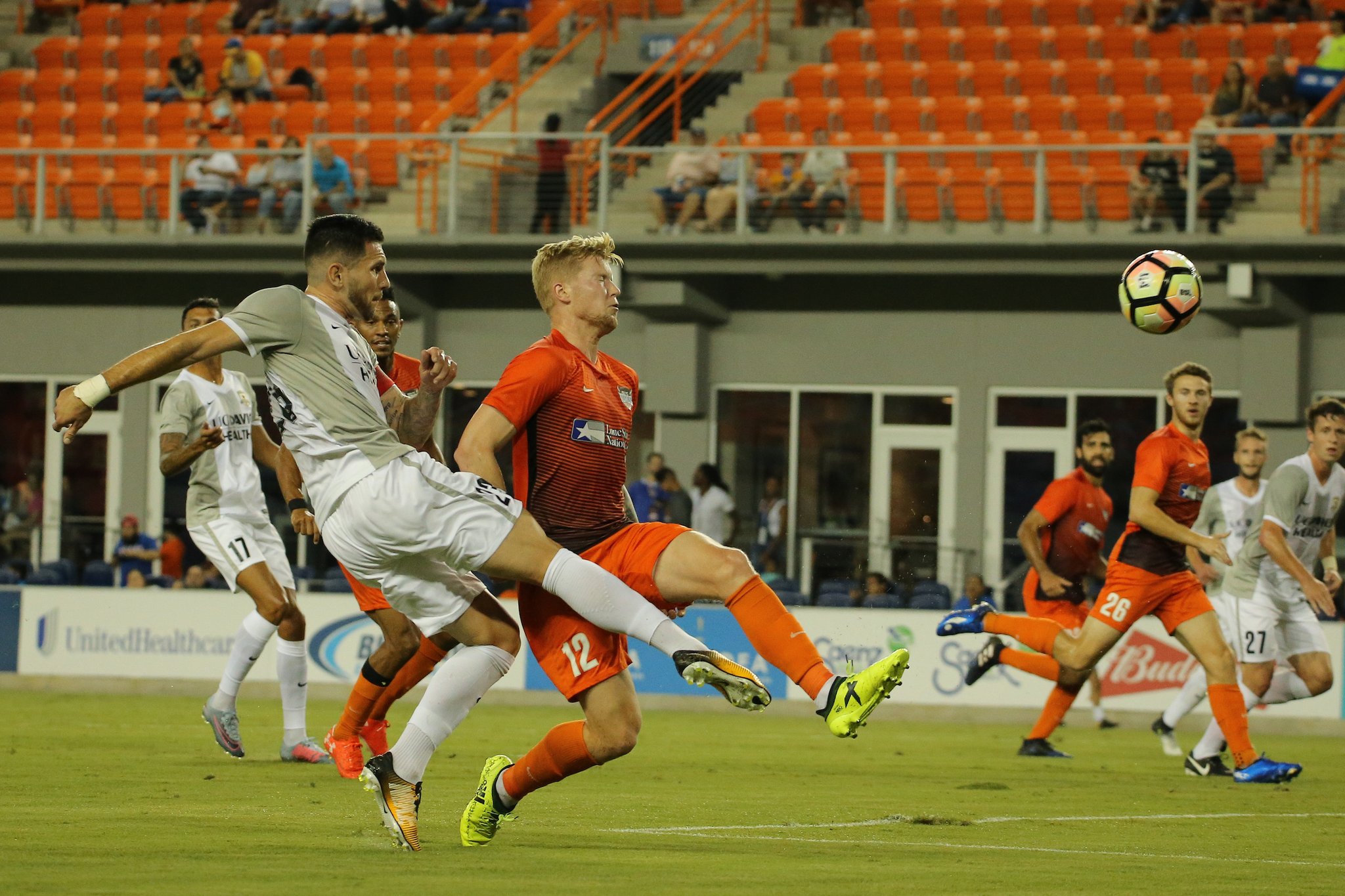 Road teams were the big winners this week in USL action.

Only Orange County SC claimed maximum points at home this weekend, with hosts going 1-5-5. With the playoffs looming, home points are invaluable for teams in the hunt for a post season birth, and this week, they failed to capture the necessary results.

Let’s take a look at all the weekend action:

Christiano Francois put the Rhinos on the board in the 19th minute, finishing off a cross to the back post from Ryan James for an easy tap in with his head. The Rhinos will regret not being able to extend the lead with a number of good opportunities squandered. Dos Santos nearly leveled it for the Fury in the 69th minute with a volley from the right side of the box. His initial effort was saved, and he was unable to keep the follow up down.

Moments later, Andrae Campbell was brought down in the area, earning the Fury a penalty kick. Dos Santos punished his former team with a low shot to the bottom right corner.

With the draw, the Fury and the Rhinos each continue their current three-game undefeated streaks. The Rhinos (11-5-9) are in third place while the Fury (7-9-10) are in eleventh place, and four points back from the final playoff spot.

Louisville City brought the Riverhounds five-game undefeated streak to an end with a convincing victory on the road.

The Riverhounds conceded twice in the first half and never recovered in the match. Luke Spencer opened the scoring for LCFC in the 33rd minute on a perfectly placed through ball from Mark-Anthony Kaye. Spencer controlled the ball and fired low past the goalkeeper. Kyle Smith added to the total after intercepting a clearance and finishing low past the goalkeeper to the far post.

LCFC put the game to bed in the 54th minute. After Luke Spencer was taken down in the box, Speedy Williams converted the penalty kick to give LCFC the three-goal advantage they would hold for the remainder of the match.

Louisville City (15-5-5) stay top of table in the East with the victory, moving three points ahead of the Charlotte Independence with a game in hand. The Riverhounds (8-9-10) remain one point back of the final playoff spot in the Eastern conference.

Phoenix Rising extended their good run of form into a seven-game unbeaten streak, striking late on the road for an important victory.

The Switchbacks appeared to get on the board in the second minute after a Kevaughn Frater free kick hit the crossbar, Luke Vercollone headed in the follow up, but the goal was disallowed for a foul on the play. The home side continued to find chances, but were unable to capitalize.

In the 50th minute Amadou Dia scored from a tight angle to give the visiting Phoenix Rising the lead. The Switchbacks continued to battle, finding an equalizer seven minutes from time. A.J. Ajeakwa raced to the back post to meat a Josh Suggs cross and turned it into the back of the net in the 83rd minute. Three minutes later, Phoenix Rising scored the winner when A.J. Gray used the defenders to screen Switchbacks goalkeeper Moise Pouaty, and curled a shot low to the back post.

The win for Phoenix Rising (10-7-7) pushed them over the Switchbacks (9-11-7) and into seventh place in the Western conference.

Orange County SC gave themselves a massive boost to their playoff ambitions defeating the Rangers at home.

Jerry van Ewijk’s 43rd minute penalty opened the scoring for OCSC. Just after the half time break, Kharlton Belmar took a chipped pass from Christian Duke and finished into the right corner in the 46th minute to level the score. OCSC found the winner on a long cross into the box from left back Juan Pablo Ocegueda that Irvin Parra rose to meet.

The win keeps OCSC (8-8-9) a point back from the final playoff spot in the Western conference. The Rangers (13-7-6) continue their current poor run of form with just a single win in their last five matches.

Timbers 2 are on a three game unbeaten streak thanks to a scoreless draw against the Western conference leading Monarchs.

The match was a heavily defensive effort from both sides, though they still combined for 25 shots on the night. Goalkeepers Wade Hamilton, and Connor Sparrow, kept their teams in the match making a number of saves.

Timbers 2 (2-18-6) can take the result as a silver lining for a tough season. The Monarchs (17-4-5) remain in first place with a comfortable seven-point lead.

Reno 1868 battled back from a goal down to stretch their current unbeaten run into seven matches.

Sounders 2 came out with all guns blazing, scoring in the first minute off of a Zach Mathers cross from a free kick that eluded attacker and defender alike on its way into the back of the net. Reno 1868 pushed for an equalizer but found difficulty in breaking down the Sounders 2 defense. Brian Brown answered back for Reno 1868 in the 39th minute, finishing off a bouncing ball in the box following a corner kick.

Reno 1868 looked like they might take all three points in the match, but failed to score on their many attempts.

The Sounders 2 (9-15-3) continue to fall down the table despite the draw, ending the weekend in 11th place and four points off the final playoff spot in the Western conference. Reno 1868 (14-5-7) remain in second place, seven points behind leader Real Monarchs SLC.

The TFC attack kept the Red Bulls II on their heels for much of the evening, breaking through in the 35th minute when Jordan Hamilton found Jay Chapman with a low cross. Red Bulls II were down for seven minutes before equalizing. Lars Eckenrode took down Florian Valot in the box to earn the first penalty try. Stefano Bonomo finished low to the right corner beating the outstretched Angelo Cavalluzzo, who had guessed correctly, in the 42nd minute. Eckenrode fouled Vincent Bezecourt in the box just three minutes later, and again, Stefano Bonomo finished low to the right corner.

Red Bulls II (11-11-5) earned just the second road win of the season and now sit in sixth place in the Eastern conference. TFCII (5-16-7) remain bottom of the table.

With the game looking like a 1-1 draw, Sac Republic found the winner in the 96th minute. Carlos Rodriguez’s header following a corner kick secured the victory for the visitors.

The City Islanders winless run came to an end Saturday night with a stoppage time goal on the road.

Jake Bond opened the scoring for the visitors in the 32nd minute with a tap in at the back post on a Frederick Opuko cross. Christian Volesky leveled the match with a 70th minute on a quick restart that beat the backline. The City Islanders picked up all three points in the 90th minute when Pedro Ribeiro headed home the winner.

Saint Louis (8-12-7) missed an opportunity to go level on points with the Riverhounds and Bethlehem Steel, and now sit four points back from the final playoff spot. The City Islanders (7-14-6) will likely miss the playoffs, but look back fondly on this result.

Los Dos looked good to take all three points Saturday night, only to concede the winner on a free kick two minutes from time.

With each team prodding the goal in the first half to no avail, Los Dos found the breakthrough shortly after halftime with a wide open header from Jean Engola. San Antonio kept the game close, but struggled to find quality chances. In the 90th minute, Michael Reed’s powerful free kick leveled the match for the visitors, ad snatched the points from Los Dos’s clutches.

The draw keeps SAFC (13-2-10) tied for second place in the Western conference while Los Dos (7-14-5) look up the table from thirteenth.

OKC will be disappointed with a scoreless draw in a game they dominated over the Whitecaps 2. Miguel Gonzales and Coady Andrews failed to convert their opportunities, and the points were split between the two sides. Credit should be given to Whitecaps 2 goalkeeper Sean Melvin for a number of great saves that kept the match level.

OKC (9-10-7) are level on points with the Switchbacks for the final playoff spot in the Western conference but stay in 9th place by goal differential.