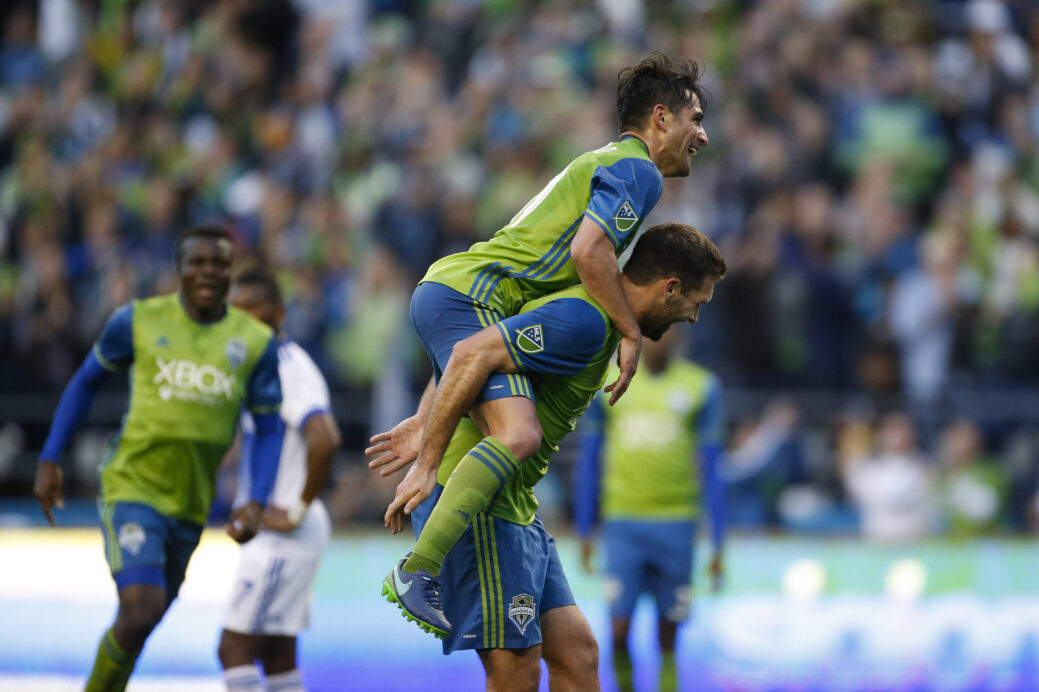 SEATTLE — It has not been the smoothest title defense. The Seattle Sounders will not win the 2017 Supporters’ Shield. There have been injuries, and there have been long stretches of impotent soccer. Hints of a championship hangover lingered well into summer.

But on Sunday night the Sounders (13-9-11, 50 points) routed FC Dallas 4-0 in front of 48,478 at CenturyLink Field. In so doing they qualified for the MLS playoffs for the ninth time in their nine-year history, the longest active streak in the league and one shy of the MLS record.

Seattle ended the night in third place, tied on points with the Portland Timbers and trailing the Vancouver Whitecaps by two points.

“This franchise is committed to winning,” said Sounders head coach Brian Schmetzer. “And I think that shows in being now the only club to make the playoffs nine years in a row. That is a fantastic achievement, and it stems from the culture of the club, the guys that put it in every game, every day at training, and from the support staff.”

The Sounders secured their playoff spot in fine form, snagging an opening goal midway through the first half and pouring it on down the stretch.

Midsummer signing Victor Rodriguez opened the scoring in the 31st minute after Javier Morales mishandled a simple clearance in the heart of the park. The ball fell to Clint Dempsey, who released Rodriguez behind the Dallas defense. The 28-year-old Spaniard with the La Liga pedigree took one long touch into the penalty area before easily slotting past goalkeeper Jesse Gonzalez for the 1-0 lead.

“That’s what he’s here for,” midfielder Cristian Roldan said of Rodriguez. “He’s here to assist us in any way he can. He does that by helping the team and scoring goals, getting assists, or just running and getting into tackles.”

Will Bruin provided the insurance goal in the 64th minute, pouncing on a rebound at the doorstep for the 2-0 lead. It was Bruin’s ninth goal of the season, but his first since the first week of August. Dempsey initially rifled a shot from the top of the area that Gonzalez saved but failed to gather.

Bruin struck again just three minutes later on a broken play in the penalty area. Rodriguez collected a loose ball near the penalty spot, but had the ball taken off his feet by what seemed to be a goal-saving tackle from Maynor Figuerora. The ball fell directly to Bruin, however, who cleanly first-timed past Gonzalez for the 3-0 lead. The longtime Houston Dynamo striker now has four 10-goal seasons to his credit.

“That’s always my initial goal at the beginning of the year: to get double digits and go from there,” said Bruin after the match. “It took me until the 33rd game this year. I would of liked it to be sooner but, you know, we’ll take it and go from there. We got one game left.”

With Dallas clearly reeling and discombobulated, Lamar Neagle scored the fourth and final goal in stoppage time, heading a far-post cross from Nicolas Lodeiro back across goal for the 4-0 lead.

The visitors, who have lost their last three games in Seattle by a combined score of 12-0, rarely threatened on the night.

Sounders center back Chad Marshall turned the ball over in his own penalty area in the 58th minute, but goalkeeper Stefan Frei charged to the edge of the 18-yard box to deny Michael Barrios. That was about as much as Frei was challenged all night by a Dallas attack that posed some questions on the counter without generating real chances.

The loss could prove disastrous for Dallas (10-10-13, 43 points), which  has now posted just one win in its last 14 matches yet somehow entered the match holding down the sixth and final Western Conference playoff spot.

“I thought we played a very good first half and a terrible second half,” said FC Dallas head coach Oscar Pareja. “We didn’t execute in the second half and there were many holes in the game that Seattle took advantage of, then [they] put the game away very early.”

The opening goal was a rare moment of first-half danger for the Sounders, who seemed surprisingly content to cede possession for the first 45 minutes. FC Dallas ostensibly opened in a 4-2-3-1 that played more like a 4-3-3 in attack, with the speedy Barrios — typically a winger — spearheading things from the middle of the front line.

Dempsey, making his 100th regular-season appearance with the Sounders, saw the first good look of the match in just the 12th minute, first-timing a rolling cross from Joevin Jones that was nicely saved by Gonzalez.

It would be the last good look for either side until the Sounders opened the scoring.

Will Bruin. With Jordan Morris injured and struggling to find the back of the net all season, the Sounders will likely need Bruin to provide production from the forward spot if they hope to repeat as league champions. A brace in the penultimate match of the regular season is a promising start.

Javier Morales. The longtime Real Salt Lake midfielder is playing as more of a deep-lying midfielder with FC Dallas. But if he played for the Sounders he could not have laid off a nicer ball for Clint Dempsey on the Sounders’ opening goal.