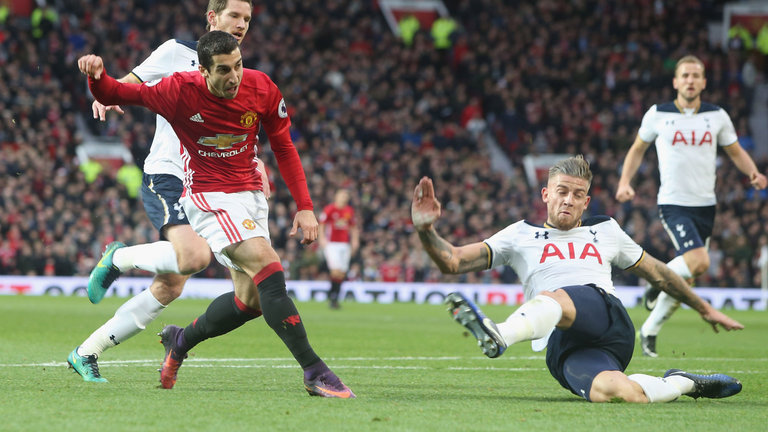 Following midweek cup and league action in several of Europe’s top leagues, this weekend features plenty of top league fixtures to take in. The top fixture comes from Old Trafford as Manchester United welcome Tottenham Hotspur to town. Something will have to give in this match as both teams sit on 20 points with an equal 6-1-2 record. Manchester United fell to Huddersfield 2-1 last weekend, but bounced back nicely by edging Swansea in the fourth round of the Carabao Cup. Spurs trounced Liverpool 4-1 at Wembley last Sunday, before falling 3-2 to West Ham in their league cup match. Two premier strikers are on display as Romelu Lukaku (seven goals) and Harry Kane (eight goals) duke it out.

Elsewhere this weekend, Juventus travels to AC Milan in Serie A play, while Bayern Munich hosts RB Leipzig for the second time this week. Ligue 1’s premier match comes from Paris as PSG welcomes Nice to town, while Barcelona head to Athletic Bilbao on Saturday in Spain.

Also on Saturday, league leaders Manchester City face off with West Bromwich Albion at the Hawthorns. Pep Guardiola’s team has only dropped points once this season, and have already ousted West Brom from the league cup earlier this season. Despite a lengthy match with Wolves midweek. City advanced to the quarterfinals of the league cup via a 4-1 penalty shootout win. West Brom fell 1-0 at Southampton a weekend ago, and is winless since Aug. 19th in league play. They will look to frustrate a City side who has 32 goals in nine league matches this season.

The round concludes on Monday as Newcastle United travels to Burnley. One point separates the sides in the table, as both are looking to continue their surprising runs this season. Burnley saw a three-match unbeaten run snapped at Man City last weekend, but are a different animal at Turf Moor. Chris Wood leads the team with three goals. Newcastle are unbeaten in their last three, defeating Crystal Palace 1-0 last Saturday. Spanish forward Joselu leads the team with two goals, and has added to a team that would like to score more goals.

A pair of intriguing league fixtures takes place on Saturday in La Liga, starting with Athletic Bilbao vs. Barcelona. The hosts are in 11th, but have already taken the scalp of Sevilla this season. A victory for Bilbao could see them move up a few spots in the table, as they will look to leading scorer Aritz Adruiz (four goals) to lead the way. Barcelona leads the La Liga table, and have not suffered defeat yet this season. Lionel Messi has been a one-man show for Barca, leading the team with 11 goals. Barcelona defeated Bilbao 1-0 in this fixture last season, and will look for more of the same this time around.

Three points separates Atletico Madrid and Villarreal in the table, and the sides are set to face off on Saturday at the Vicente Calderon. Atletico are unbeaten in their last five matches, but have only scored three goals in that span. Antoine Griezmann has two goals for Diego Simeone’s side, and will need to get back to goalscoring form this weekend. Villarreal have won their last three league fixtures, allowing only one goal in the process. DR Congo international Cedric Bakambu leads the team with eight goals, and will be huge to the team’s rise up the table.

For the second time in three days, Bayern Munich faces off with RB Leipzig across two different competitions. Bayern edged Leipzig 5-4 in penalties in Wednesday’s DFB Pokal second round match up. Bayern are unbeaten in their last five matches, winning four of them. Robert Lewandowski has nine goals for Bayern, and can beat you in a variety of ways. Leipzig saw a four-match unbeaten run snapped with the midweek loss, but will look for a strong performance away from home. Timo Werner leads the team with five goals.

Saturday’s early contest comes from the WIRSOL Rhein-Neckar-Arena as Hoffenheim hosts Borussia Monchengladbach. Julian Nagelsmann’s side has not tasted victory in the league since Sept. 23rd, and will look to change that at home. Leading the offense is striker Mark Uth who has five goals in eight appearances. Gladbach has been on the end of some lopsided defeats in league play, but will look to change that this weekend. They have allowed 17 goals through nine matches, and currently sit in eighth place. Lars Stindl (three goals) and Thorgan Hazard (two goals) are huge to the team’s offensive strategy.

Saturday’s top fixture sees two historic clubs do battle at the Giuseppe Meazza. Hosts AC Milan rolled to a 4-1 victory midweek, which snapped a four-match winless run in all competitions. Milan has a trio of strikers that can beat you, but the main thing will be can they contain Juventus’ offensive weapons. Juve are in third, and are winners of their last three fixtures. Paulo Dybala leads the team with 11 goals, while Miralem Pjanic has five assists. Milan won this fixture 1-0 last season, and will hope to pull off the upset once again.

Matchday #11 in France’s top-flight kicks off on Friday as league leaders PSG hosts Nice at the Parc Des Princes. Unai Emery’s side drew 2-2 at Marseille last weekend, thanks to a 93rd-minute equalizer from Edinson Cavani. Cavani leads the team with nine goals in league play, and is a threat in numerous ways. Nice has struggled to get much going this season, currently sitting in 14th place. Losers of their last four matches, Nice will look to get things going against one of Europe’s top sides. Mario Balotelli and Alassane Plea have combined for eight goals in league play this season.

Saturday’s top match features two of the top seven clubs in the current league table, duking it out for postitioning. Bordeaux hosts Monaco at the Nouveau Stade Bordeaux, looking to snap a three-match winless run. Brazilian midfielder Malcom leads the team with five goals and four assists. Moanco, who currently sit in second, defeated Caen last weekend, which snapped a four-match winless run of their own. Radamel Falcao has been a man on a mission this season, leading the team with 13 goals so far. In their last eight meetings against one another, each side has three wins out of those eight.