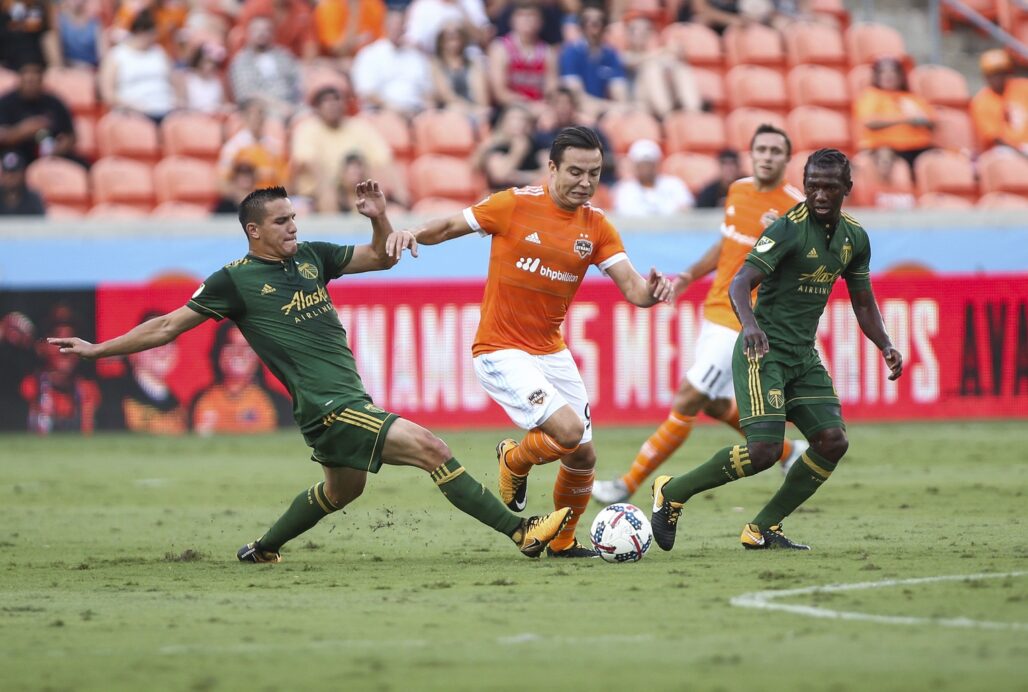 The Houston Dynamo and Portland Timbers are going to have to light the goals on fire to create more excitement than the World Series has in Houston.

However, if you look at the two regular-season meetings between the Western Conference foes, there’s a chance we could be in for a shootout.

There are five 10-goal scorers on the rosters, but don’t discount defense in Monday’s first leg of the Western Conference semifinal.

The Timbers stormed to a 4-2 victory over the Dynamo at Providence Park on March 18, while the two sides played to a 2-2 draw at BBVA Compass Stadium on July 29.

The stretch run of the regular season was not kind to Erick “Cubo” Torres. The Mexican international scored twice after the Fourth of July, with both of those goals coming on August 23 against FC Dallas. Torres was active in the knockout-round win over Sporting Kansas City, as he put two of his four shots on target. He needs to continue to same activity into Monday.

It’s hard not to name Diego Valeri as Portland’s top player to watch. The Argentinian put together a remarkable regular season with 21 goals and 11 assists in 32 games. If the Timbers score on Monday, Valeri will probably have something to do with it.

The matchup between the Timbers forward line and Dynamo defense is different than we thought it would be because of injuries, but it still carries importance. With Leonardo out for Monday’s game, the Dynamo will call on Philippe Senderos and Adolfo Machado to deal with the speed of Darren Mattocks among others.

Senderos and Machado played a solid game against Sporting KC on Thursday, but the Timbers bring a different element to the game with its pace, creativity and ability to hit opponents from all angles.

With Fanendo Adi still dealing with an injury issue, Mattocks has been given an extended run up top for the Timbers. If he can find pockets of space in between the Dynamo center backs, it could open up the game for the rest of the Timbers attack, which could spell trouble for the home side.

Most of the attention in the Houston attack will be paid to Torres and Alberth Elis, which leaves space for summer signing Tomas Martinez to feature in a key role against the Timbers. The 22-year-old midfielder found a rhythm by starting five of the club’s final seven regular-season games and he went 120 minutes on Thursday. With Elis, Torres and Alex garnering attention, Martinez could be the player who creates the winning chance out of nowhere.

We all know about the powerful midfield led by Diego Chara, Darlington Nagbe and Valeri, but the most important player for the Timbers on Monday could be right back Alvas Powell. The Jamaican is one of the best fullbacks in the league, and he’ll have a say on both ends of the field. He’ll be tasked with silencing either Elis, Alex or Romell Quioto and will have a chance to surge forward and test DaMarcus Beasley on occasion.

Both teams carry explosive attacks into Monday, which leads us to believe there won’t be a boring goalless tie like we saw in the other Western Conference semifinal first leg in Vancouver on Sunday.

The game will be determined by each team’s back six and goalkeeper. The Timbers gave up 50 goals in the regular season, the most of any remaining playoff team, while the Dynamo let in 45.

Conceding set pieces is a big no-no for either team as well, but with midfield destroyers Diego Chara, David Guzman, Ricardo Clark and Juan David Cabezas out on the field, there’s sure to be a few opportunities for the strikers to pounce on free kicks.

The Dynamo also proved they could outlast a team by winning in extra time over Sporting Kansas City. The Timbers’ road record of 4-9-4 isn’t fantastic, but is the second-best of the West playoff teams.