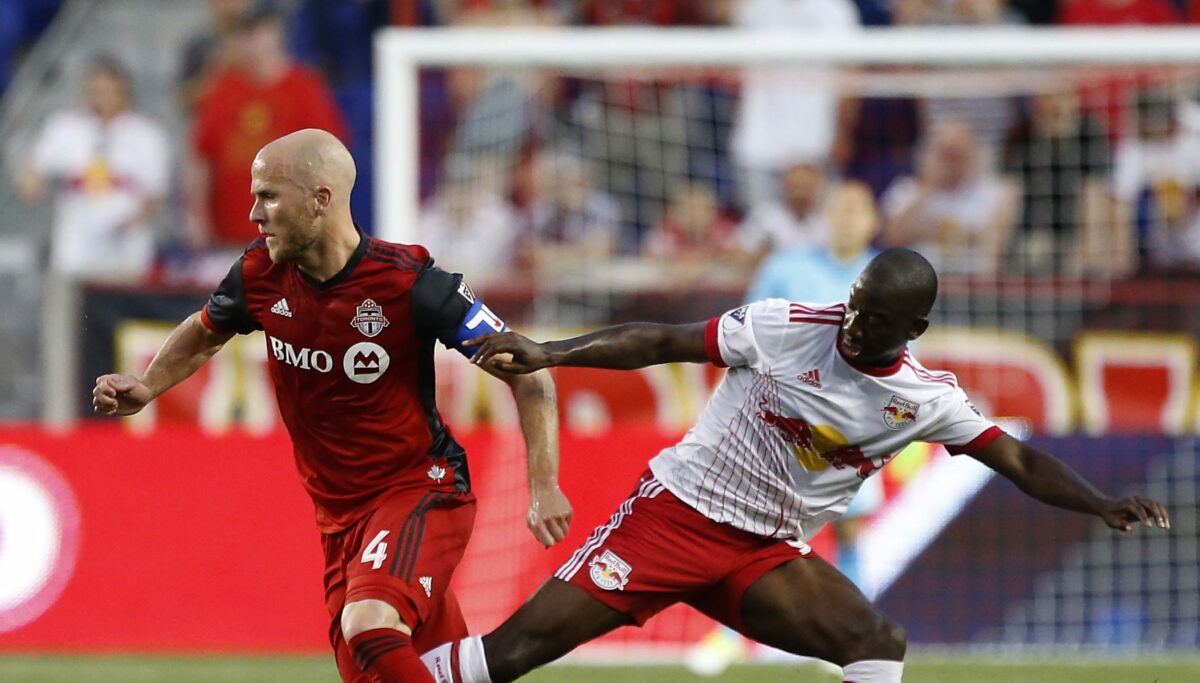 The New York Red Bulls thoroughly dispatched of the Chicago Fire to book their spot in the Eastern Conference semifinals. What awaits them will be a different test entirely.

Toronto FC is fresh off a record-setting regular season, one which saw the club seal a league-high 69 points. Now, TFC travels to Red Bull Arena to open their postseason against a Red Bull team that built a bit of momentum in a 4-0 beating of the Fire last week.

They’ll need to harness each and every bit of that momentum when they kick off against TFC, though, as the Canadian club continues its revenge tour in pursuit of a second consecutive MLS Cup trip.

After holding TFC to a 1-1 draw at Red Bull Arena on May 19, the Red Bulls were battered by the Supporters’ Shield winners, 4-2, at BMO Field on Sept. 30.

The TFC midfielder has been a key piece all season long as he’s put together what is likely his most impressive MLS campaign yet. Facing a Red Bulls midfield that is, at times, very attack-heavy, Bradley will have plenty of defensive duties but should have time and space to play quite a few passes straight into dangerous situations.

The Red Bulls’ playmaker faces a tough test when it comes to opening up a stout TFC defense, but pretty much anything positive in the attacking end will come through Kljestan. The midfielder looked good against the Chicago Fire in the playoff opener, and he’ll have to be great if the Red Bulls hope to have a chance.

Jozy Altidore vs. Damien Perinelle and the Red Bulls defense

Regardless of what you do as a defensive unit, Sebastian Giovinco is going to cause problems. He’s just that good, but TFC really becomes unstoppable when Jozy Altidore is at his best. TFC can win without Altidore at full speed, but they pretty much can’t lose when the U.S. Men’s National Team forward is firing on all cylinders alongside his Italian strike partner.

Knowing that, the Red Bulls defense will have its hands full. While looking to keep every eye on Giovinco, the Red Bulls will also need to win the physical battle against Altidore. It’s on Damien Perinelle to help the inexperienced Aaron Long and newcomer Michael Murillo to keep both TFC forwards at bay.

TFC’s left wing back has been strong throughout the season and remains a vital piece in both the attack and the defense. Matched up with Tyler Adams, Morrow faces a tough matchup, but getting the wingsbacks involved in the attack would provide vital depth and space for a TFC team with plenty of dangerous playmaking weapons.

It doesn’t take much to see that the Red Bulls are a much better team with Daniel Royer involved. The Austrian’s mid-summer run of form coincided with the Red Bulls’ best stretch of the season. He scored a goal and added an assist in his last match against TFC, and he’ll need to be involved in a big way on Monday as well.

Make no mistake: we’ll need to see the best version of the New York Red Bull if they want to escape this series. That starts on Monday with a vital home match.

Given the attacking weapons, the Red Bulls are equipped to go head-to-head with TFC, and getting those goals and setting a tone at Red Bull Arena will be vital. The Red Bulls probably know they can’t head to BMO Field trailing, making it important to come out hot from the start on Monday.

Expect the Red Bulls to push the tempo and try and feed off the energy of last week’s battering of the Fire. There’s reason for confidence and also a certain level of desperation when facing a team that may just be the best in MLS history.

For Toronto, the idea is to keep things calm. A draw at Red Bull Arena would be a fine result, especially if TFC can create a goal or two along the way. They won’t bunker and they’re too good not to get forward and create chances, but TFC doesn’t need to totally push for anything too drastic. Get in, get some goals, get out.

Overall, the Red Bulls face both no pressure and a heck of a lot of it at the same time. On one end, they’re no doubt underdogs against an elite MLS team. On the other, they’ll have to pick up a major result against that team to have a chance of advancing.